The Olympic torch relay will not be run on public roads in Osaka city given rising virus cases, the Japanese region's governor said Friday, but a cancellation has not yet been decided. 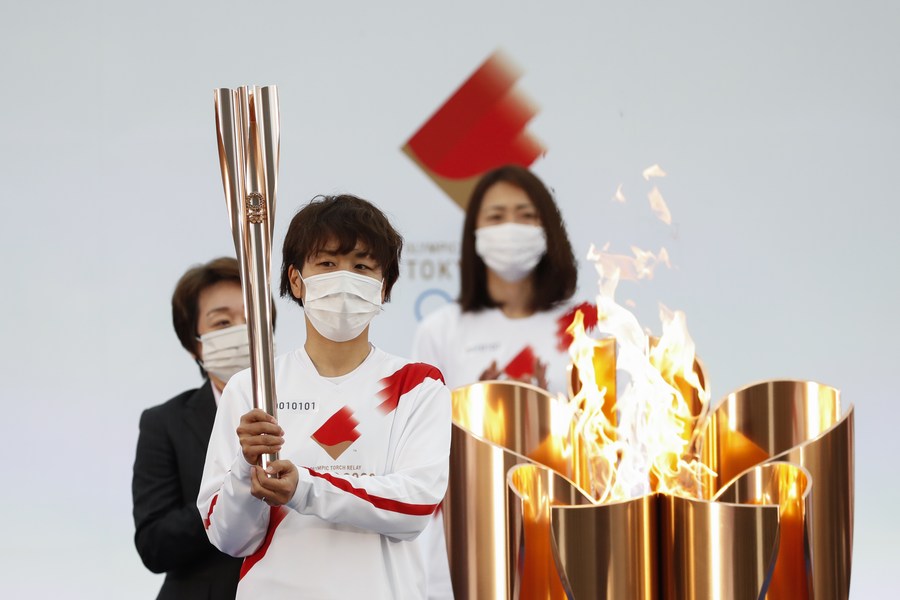 The torch is prepared to be lit during the Tokyo 2020 Olympic Torch Relay Grand Start at J-Village National Training Center in Futaba, Fukushima of Japan, on March 25, 2021. (Photo: Xinhua)

"We'll discuss with the Tokyo 2020 organising committee if there are any alternatives," he added.

His comments came a day after he and the city's mayor called for the torch relay leg to be cancelled given a recent spike in Covid-19 infections in the region.

Japan's Olympic Minister Tamayo Marukawa expressed support in the morning, saying it was "reasonable" that the Osaka government has proposed cancellation as they need to contain the spread of infections.

Tokyo 2020 president Seiko Hashimoto told reporters Friday that the fate of the Osaka city relay leg was still being discussed.

We want "to come to a conclusion at our earliest convenience, but the discussions are still going on," she said.

"Although we would like to make conclusions as soon as possible, we also need to be flexible so that we will be able to accommodate changing events that may come up."

The relay began on March 25 from Fukushima, with organisers hoping it will help build enthusiasm across Japan for the Games after a year-long delay caused by the coronavirus pandemic.

It is scheduled to travel through Osaka prefecture on April 13 and 14, starting in Sakai city and ending in Osaka city.

Rules already require spectators lining the relay route to wear masks and avoid cheering, and the organisers have said legs of the route could be cancelled if overcrowding occurs.

Coronavirus infections have been rising in Osaka, Hyogo and Miyagi prefectures, and the government announced new restrictions for the regions on Thursday, allowing officials there to require businesses to close early or face fines.

Olympic officials have released a series of rulebooks they say will allow the Games to go ahead this summer despite the virus.

But they have already been forced to postpone several test events, with Kyodo News agency reporting Friday that a diving test event might now be cancelled.

The Diving World Cup, which is also an Olympic qualifier, is scheduled to take place in Tokyo from April 18-23, but Kyodo said some teams were reluctant to travel to Japan.

FINA, the swimming federation that oversees the competition, did not respond to a request for comment, and Hashimoto said no decision had been taken yet.

"Last night we did receive a letter from FINA but the details on the conclusion of whether they will be cancelling this event or not is not yet stipulated," she said.

Kyodo reported that FINA was concerned about possible infection risks to athletes and the fairness of the competition.