The postponed Olympics and a worrying second surge in coronavirus cases will be the main issues when Tokyo voters Sunday elect a governor to run one of the world's most populous cities. 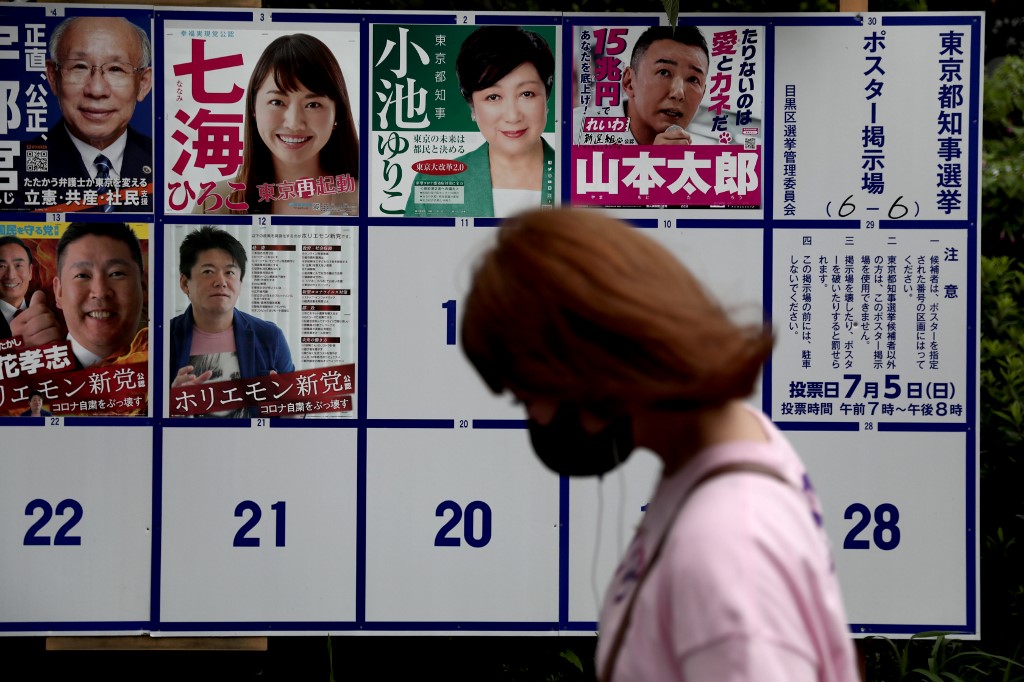 A woman walks past a board displaying posters of Tokyo governor Yuriko Koike (2nd R) and other candidates for the capital's gubernatorial election, on July 4, 2020. (Photo: AFP)

Incumbent Yuriko Koike, a media-savvy veteran of the Japanese political scene, who ran against Prime Minister Shinzo Abe at the last national election by creating a new party, is widely expected to win a second term.

The election comes as Tokyo fights a coronavirus spike that has seen more than 100 new cases reported in recent days -- many from clusters in the city's host and hostess clubs.

In a recent interview with AFP, Koike said she was continuing to "make all-out efforts in the battle against the virus to put on a Games that is full of hope".

The 67-year-old pledged an event "that is safe and secure for athletes and fans from abroad as well as for residents of Tokyo and Japan".

Her main challengers are Kenji Utsunomiya, 73, a lawyer backed by the Constitutional Democratic Party of Japan and two other opposition parties, and Taro Yamamoto, 45, a former actor and leader of the anti-establishment party Reiwa Shinsengumi.

Utsunomiya has pledged to reinforce the capital's medical services that buckled under the weight of the coronavirus crisis, while stressing the importance of offering more support to society's most vulnerable.

If elected, Yamamoto says he would scrap the Tokyo Olympics altogether and has pledged cash handouts to city residents to address the negative economic impact from the pandemic.

Yamamoto appears to be tapping into a growing weariness with the Olympics, now due to begin on July 23, 2021 after the historic one-year postponement due to the coronavirus.

Just over half of Tokyo's residents don't think the Games should be held next year, backing either a further delay or an outright cancellation, according to a poll published late last month.

A record 22 people are running for governor this year but campaigning has been subdued as candidates took measures to avoid spreading the disease.

Some of the more colourful candidates include Masayuki Hiratsuka, a 38-year-old YouTuber who insists the new coronavirus is "just a cold" and people "don't need a new lifestyle" centred around social distancing.

Takashi Tachibana, 52, has vowed to "destroy" public broadcaster NHK -- he is still counted as one of five major candidates by local media.

She has been seen as a steady pair of hands during the coronavirus crisis, issuing frequent video messages -- including in English, which is highly unusual for a Japanese politician.

However, she fluffed her biggest political gamble in 2017 when she created a new "Party of Hope" that coalesced opposition to Abe's all-powerful Liberal Democrats in the national election.

This sparked speculation she would ditch her role as Tokyo governor to run for the prime minister.

However, despite initially promising opinion polls, support imploded because of public confusion over her intentions.