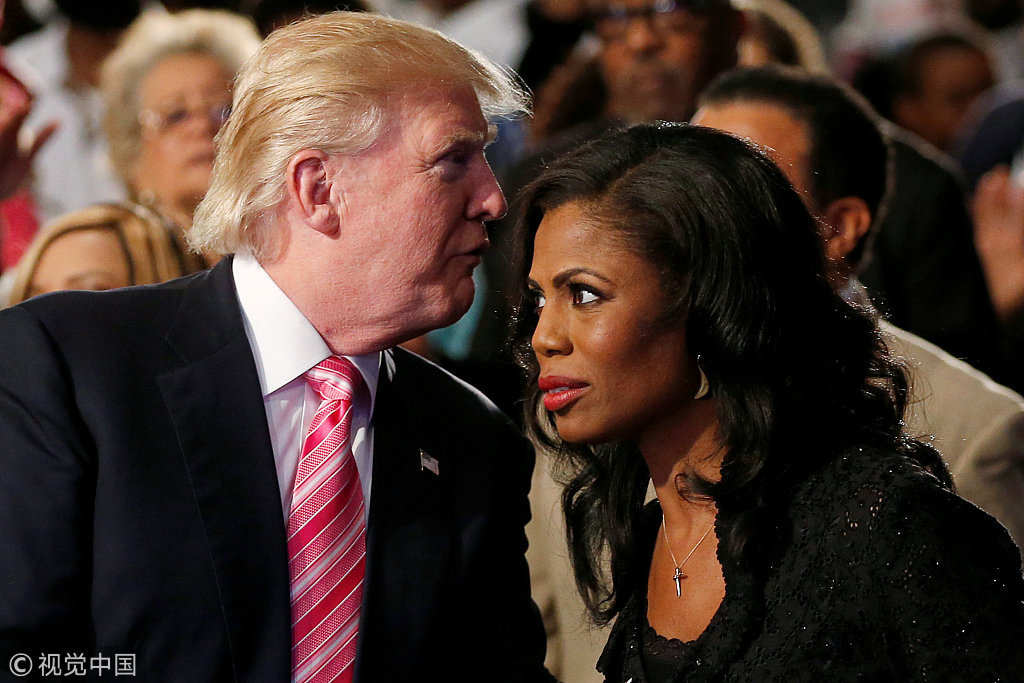 Washington (People’s Daily) - Reality television star and former White House aide Omarosa Manigault Newman’s "Unhinged: An Insider's Account of the Trump White House" finally hit bookstores on Tuesday. In the book, Manigault Newman claims that she believes there's a tape of Trump saying the "n-word," and that the president is in a state of "mental decline." She also claims that Trump considered being sworn in as president with a copy of his book "The Art of the Deal" instead of a Bible.

Trump called his former White House aide “that dog” and a “crazed, crying lowlife” on Tuesday after her allegations against him of mental deterioration and racism.

Omarosa first came to public attention in 2004 after becoming a participant on the first season of NBC's reality television series, The Apprentice. Stemming from her controversial, blindsiding, alienating, dog-eat-dog, in-your-face and acrimonious tactics together with her eloquence and craftiness on The Apprentice (particularly in its boardroom segments), she soon became the "woman America loved to hate".

At the Republican National Convention in July 2016, Manigault Newman announced that she had been named Director of African-American Outreach for Donald Trump's presidential campaign. On January 3, 2017, it was reported that Manigault Newman would join Trump's White House staff, focusing on public engagement. Her specific title was made public the next day as Assistant to the President and Director of Communications for the Office of Public Liaison.

In her first interview after being named to the Trump White House, she told Megyn Kelly that she was a "Trumplican" and had switched her political affiliation to the Republican Party. She hopes more African Americans will follow her lead and do the same, given how she believes Democrats take African American voters for granted, making empty promises to them.

However, the relationship between her and Trump has never been a traditional one. On December 13, 2017, the White House announced her resignation, effective January 20, 2018.

Newman has claimed to have heard the recording, though no proof of its existence has ever been made public. Trump said Manigault Newman had signed a non-disclosure agreement. The agreement reportedly was signed during the Trump campaign.

The tape seemingly backs Manigault Newman’s claim that campaign officials were aware of a tape of Trump using the racist term on the set of The Apprentice. Trump said Monday, “I don’t have that word in my vocabulary” and producer Mark Burnett had called him to say no such tape exists.

Twenty minutes after CBS posted audio of the tape on its Twitter feed, Trump went on the attack, writing, “When you give a crazed, crying lowlife a break and give her a job at the White House, I guess it just didn’t work out. Good work by General Kelly for quickly firing that dog!”

CNN reports that Trump's attacks on Manigault Newman come as her tell-all book was released this week, which contains several unflattering claims against the president and his staff. White House press secretary Sarah Sanders said the book is "riddled with lies and false accusations."

Sen. Jeff Flake of Arizona condemned Trump's name-calling and said his fellow Republicans "should not be OK with it."

"This kind of language is unbecoming of a President of the United States. There is no excuse for it, and Republicans should not be OK with it," said Flake.