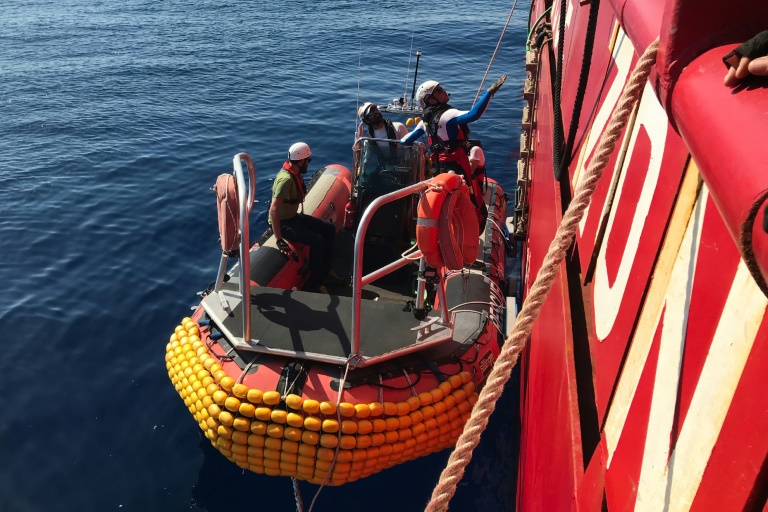 The Ocean Viking is bound for the Libyan coast, with stocks of medicine and pregnancy kits on board. (Photo: AFP)

The Ocean Viking is bound for the Libyan coast, and beside stocks of medicine and pregnancy kits, on-board midwife Marina is busy painting a turtle on the ship's migrant shelter.

As well as preparing to treat the exhausted, dehydrated Africans the ship hopes to rescue, experience has taught her that she must be ready to welcome the children -- and any babies that may be born on board.

With the Italian government refusing to let migrants land on its shores unless other EU countries help take them in, the rescuers are preparing for a long wait before disembarking.

"We know that we may have to keep patients on board for a while. It's a new challenge", says Stephanie, a German nurse on board. There is also a doctor, another nurse and the midwife.

They asked not to be identified by their full names for fear of prosecution by authorities.

The Ocean Viking mission is jointly operated by Doctors Without Borders (MSF) and the migrant aid charity SOS Mediterranee.

Those two groups also operated the Aquarius, a rescue ship that made headlines last year when it spent days at sea after Italy and Malta refused to let it dock.

Among the migrants pulled from the water by teams on the Aquarius in its three years of rescue missions were hundreds of pregnant women.

Born in a storm

MSF has set up a clinic on the bridge of the Ocean Viking. The white container has an emergency room, a separate room with three sleeping berths and a delivery room with blue bedsheets.

Generally, pregnant women who are nearing their delivery date are entitled to a medical evacuation -- even in Italy, where authorities under far-right interior minister Matteo Salvini have turned away some migrant rescue boats.

In recent years, at least 35 babies have been born on military or humanitarian relief vessels in the Mediterranean, according to an AFP count.

Six of them were born to mothers rescued by the Aquarius, the teams on the mission say.

In May, 2016, Desire Alex was the first baby born on the ship. The baby boy was named after the ship's captain.

Five others followed, their first names in several cases reflecting the incredulous relief of their mothers: Newman, Favour, Mercy, Christ and Miracle.

Christ's mother gave birth on the open sea in a boat filled with men.

When she climbed on board the Aquarius, her baby was still attached to her by the umbilical cord.

Marina was one of the medics who took care of Favour on a stormy night in December 2016.

The baby's mother, a Nigerian woman who lost her husband in Libya, had begged the smugglers to let her get on the boat -- as a "favour".

"I ask for a medical evacuation... (it was) impossible."

Favour was born the next day and in perfect health, the midwife says.

She shows a photo on her phone of the child -- now a toddler, living in Italy.

Marina says she has observed that "the movements of the boat, especially in a storm, favour contractions" in childbirth.

Another trigger for labour, she says, could be the relaxation that comes from the relief the mothers feel once they board a rescue boat.

The Aquarius rescued nearly 4,700 women in nearly three years of operations. Most of them had suffered violence and sexual abuse on their journey.

Marina helps all the women who come to her and says her assistance is vital for those who have been raped.

Women who ask for pregnancy tests are given them but some of those rescued do not even know they are pregnant. "Sometimes it's up to me to tell them", she says.

Marina has also treated many young girls, minors travelling alone, and women and girls who have come from Libya's so-called "connection houses", where migrants are forced into prostitution.

"We did not do it before, but we had so many requests," the midwife says.

"Many women do not say (that they are pregnant), or do it just before disembarking."

A painted zebra, elephant, turtle and bird wings now decorate the walls of the on-board shelters in preparation for the migrants.

There are also drawings done by rescued children on board the Aquarius.

The MSF medics have stocked bandages, drugs and other medical supplies as well as soft toys, games and cards.

"We are pretty well equipped," says Stephanie. "But we hope we do not have to deal with this situation for too long."