On the ground and afar, diaspora boosts India's virus fight

India's large diaspora — long a boon to India's economy — is tapping its wealth, political clout and expertise to help its home country combat the catastrophic coronavirus surge that has left people to die outside overwhelmed hospitals.

Around the world, people of Indian descent are donating money, personally delivering desperately needed oxygen equipment and setting up telehealth consultations and information sessions in hopes of beating back the outbreak. 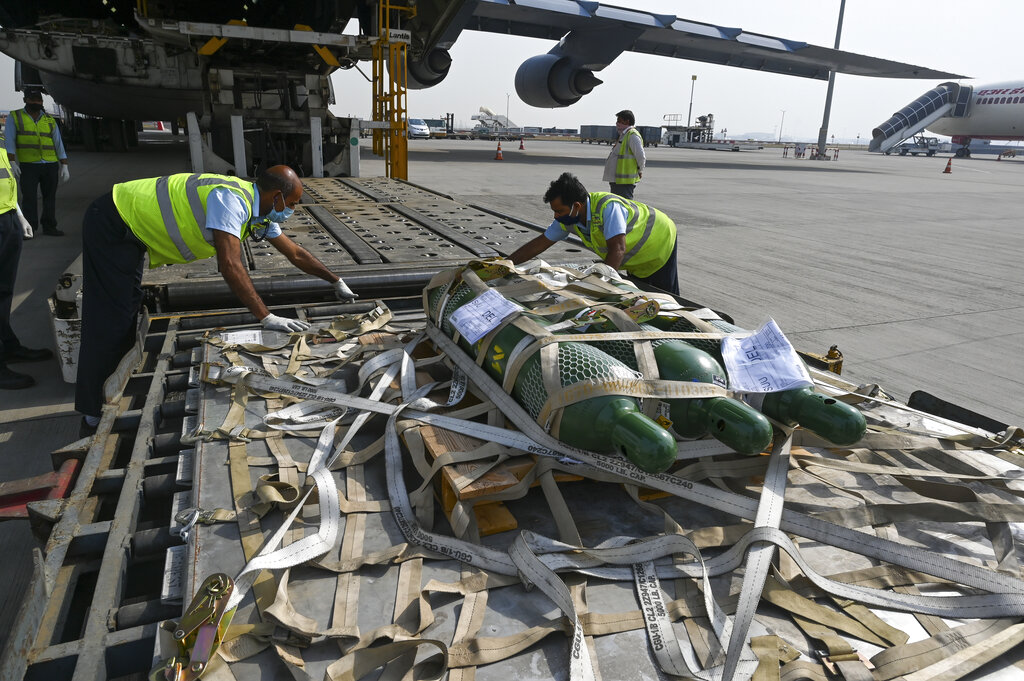 In this April 30, 2021, file photo, relief supplies from the United States in the wake of India's COVID-19 situation arrive at the Indira Gandhi International Airport cargo terminal in New Delhi, India. (Photo: AP)

Two humanitarian groups in the U.S. led by people of Indian background raised more than $25 million in recent days to help the teetering health care system. Indian American doctors, hotel owners and other entrepreneurs, some responding to requests for help from Indian leaders, have pledged or donated millions more.

In Britain, volunteers at three Hindu temples raised more than 600,000 pounds ($830,000) last weekend by racking up 20,127 kilometers (12,506 miles) on stationary bikes, or roughly three times the distance from London to New Delhi. And in Canada, Sikhs have donated between $700 and $2,000 to each of dozens of people in need of costly oxygen cylinders.

The magnitude of the response reflects the deep pockets of many people in the overseas Indian community, as well as their deep ties to India, which have fueled similar efforts to help the country in the past.

“I feel that this crisis has kind of sparked or triggered a fresh and new emotional affiliation to India,” said Nishant Pandey, CEO of the American India Foundation. The group launched a fundraising drive on April 24 that raked in roughly $20 million in a week, much of it from the Indian diaspora. The money will be used in part to expand hospital capacity and oxygen production in India.

India’s official count of coronavirus cases surpassed 20 million this week, and deaths officially topped 220,000, though the true numbers are believed to be much higher.

“Mother India is in dire need of the non-resident Indians to step up," Hemant Patel, a hotel developer from Miami, said in an appeal for aid on WhatsApp. His efforts helped generate more than $300,000 in medical donations, he said.

Patel traveled to his hometown of Navsari in the state of Gujarat in March to visit his mother after getting vaccinated and is now serving as a liaison between local hospitals and Indians in the U.S.

He has also donated eight oxygen machines —- holding a religious ceremony to bless the first one — and paid to have a van outfitted with a stretcher and oxygen to serve COVID-19 patients.

“God has put me in the right place at the right time,” he said.

Some members of the overseas Indian community have appended harsh words to their support efforts, accusing the Indian government of botching the fight against the virus.

Others, especially medical professionals, wish they could go to India but face travel restrictions there and new ones in the U.S., Britain and Canada.

Sunil Tolani, CEO of a hotel and real estate company in California, said he donated $300,000 to help people in India during the surge and lobbied the Biden administration to step up its support. Other prominent Indian Americans have also pressed the White House for action.

“If India would have put their act together, they wouldn’t need this help in the first place," Tolani said, accusing the government there of “total complacency and incompetence.”

The surge in infections since February has been blamed on more contagious variants of the virus as well as government decisions to allow huge crowds to gather for Hindu religious festivals and political rallies.

A spokesman for the Indian government, Prakash Javadekar, said it is ramping up hospital capacity and supplies of oxygen and drugs but is facing a “once-in-a-century crisis.”

The U.S. last week began delivering treatments, rapid virus tests and oxygen along with materials needed for India to boost production of COVID-19 vaccines. Britain is also sending a substantial amount of aid.

More than 6 million people of Indian descent live in the two countries — part of a diaspora the Indian government estimates at over 32 million, including nearly 3.5 million in the United Arab Emirates and just under 3 million in Malaysia. Donations are pouring in from non-Indians and corporations as well.

Sikhs for Justice, an advocacy group that calls for an independent state for Sikhs in India, said the Indian government blocked its COVID-19 relief website, oxygenfund.org, that aimed to connect Indians who can’t afford surging prices for oxygen to Sikhs in the U.S., Canada and other countries willing to send them money.

The group turned to WhatsApp and by Monday had managed to provide assistance to nearly 150 people, said its general counsel, Gurpatwant Singh Pannun.

An email to the Indian Embassy in Washington went unanswered. The Indian government has classified Sikhs for Justice as a terrorist group and banned it, Anshuman Gaur, India’s deputy high commissioner to Canada, told The Canadian Press.

India is not shying away from soliciting help from its expatriates, continuing a long tradition of drawing on their money and patriotic fervor.

In 1998, Indian leaders urged non-resident Indians to invest in the country by buying government bonds after the U.S. and other nations imposed sanctions against India for conducting nuclear tests.

In 2001, disaster assistance from Indian Americans helped rebuild parts of Gujarat devastated by an earthquake that killed thousands. Prime Minister Narendra Modi in recent years has encouraged Indians overseas to contribute funds and expertise to his sanitation initiatives in India.

During the current crisis, Indian consulate officials reached out to the American Association of Physicians of Indian Origin, which responded by raising more than $2 million in about a week, President Sudhakar Jonnalagadda said.

The group, which represents more than 80,000 doctors in the U.S., has used the money to buy oxygen concentrators and plans to expand a telehealth network to allow patients in India to consult with physicians in the U.S.

The virus's rapid spread in India has left few people in the diaspora untouched by tragedy. Sajal Rohatgi, co-founder of Subziwalla.com, a U.S.-based South Asian grocery delivery service, said dozens of friends and family in India have contracted the virus and two have died.

He and the company's other founder, Manav Thaker, arranged for a U.S. virologist to give a talk on Instagram about India's COVID-19 crisis and how people there can try to stay safe — information they say is lacking there.

Their hope is that Indian Americans will convey the importance of masks, social distancing and vaccinations to their friends and family in India.

"We really just want to give the right, credible information," Thaker said. “Then maybe we'll get some relief.”