On virus, Trump and health advisers go their separate ways

A multi-state coronavirus surge in the countdown to Election Day has exposed a clear split between President Donald Trump's bullish embrace of a return to normalcy and urgent public warnings from the government's top health officials. 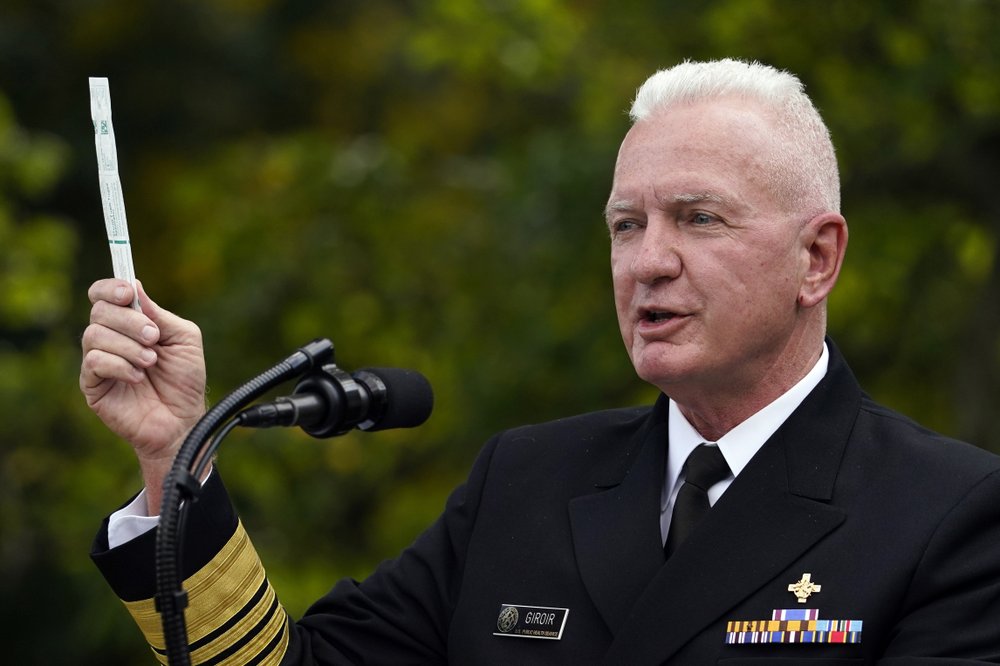 In this Sept. 28, 2020, file photo, Adm. Brett Giroir, assistant secretary of Health and Human Services, holds a swab manufactured by Puritan Medical Products as he talks about a new COVID-19 test during a event with President Donald Trump about coronavirus testing in the Rose Garden of the White House in Washington. (Photo: AP)

It's the opposite of what usually happens in a public health crisis, because political leaders tend to repeat and amplify the recommendations of their health experts, not short-circuit them. "It's extremely unusual for there to be simultaneous contrary messaging," said John Auerbach, who heads the nonpartisan Trust for America's Health.

The president and the health officials appear to be moving farther apart since White House chief of staff Mark Meadows declared last Sunday "we're not going to control the pandemic."

Since then, Health and Human Services Assistant Secretary Adm. Brett Giroir has done a round of interviews warning that the country's situation is "tenuous" but that Americans can indeed control the virus by practicing what he calls the "3W's" — watching your distance from others, wearing a mask, and frequently washing your hands.

White House coronavirus adviser Dr. Deborah Birx, touring the states to raise prevention awareness, lamented in Bismarck, North Dakota, that she hadn't seen such disdain for mask wearing elsewhere. "We find that deeply unfortunate because you don't know who's infected and you don't know if you're infected yourself," she told reporters. The state's positive test rate is 11%, above the level indicating widespread transmission.

HHS Secretary Alex Azar, for his part, has a profile photo of himself masked up on his Twitter account.

But Trump continues to ridicule masks and mask-wearing as he insists the U.S. has turned the corner on the virus. At a reelection rally Wednesday in Bullhead City, Arizona, the president painted a sardonic word picture of left-coast Californians trying to eat through their masks.

"How about California ... where you are supposed to eat with the mask (and) can't take it off?" Trump said. "You see people and, boy, you know when you have spaghetti and meat sauce ... you walk out it looks like you got into a fight."

That's not actually what the California governor's office recently recommended to restaurant goers. The advice was to keep the mask on when not eating, or "between bites." An illustration showed a diner masked while reading the menu and, later, while wiping her hands with a napkin after eating.

It might all be considered political theater if the nation's situation weren't so serious.

"We are in a third wave," said Marta Wosinska of the Duke-Margolis Center for Health Policy. "We are seeing pretty dramatic increases in the number of people hospitalized and an uptick in deaths."

The White House insists there's no conflict between Trump and the health advisers who back in the spring shared the briefing room podium with the president on many an occasion.

"As the president has said, the cure cannot be worse than the disease and this country should be open armed with best practices, such as social distancing, good hygiene, and face coverings, to limit the spread of COVID-19," spokesman Judd Deere said in a statement.

The health officials do not invoke Trump in their warnings, and they sidestep questions that might lead them into anything that could be perceived as a direct criticism. But their message reflects a different view of reality than what's coming from the president and senior White House officials.

"I wasn't an English major, but 'tenuous' seems like the right word" to describe the condition of the country, Giroir said this week on NBC. The surge can be controlled by going back to the "3W's" but "if we don't do those things it may force local officials or government officials in the states to have more draconian measures."

The numbers bear him out.

According to data through October 28 from Johns Hopkins University, the seven-day rolling average for daily new cases in the U.S. rose over the past two weeks from 52,350 to more than 74,180. That marks a return to levels not seen since the summer surge.

The seven-day rolling average for daily new deaths rose over the past two weeks from 724 to 787.

Fifteen states have test positive rates of 10% or higher, considered an indicator of widespread transmission. The picture is not all bleak because there are also states that have succeeded in curbing previous surges.

But test positive rates have been rising in 45 states, according to the COVID Tracking Project.

Giroir also said the facts contradict the notion that that the U.S. has more cases because it tests so many people. That's an assertion often heard from Trump.

"We do believe, and the data show, cases are going up — it's not just a function of testing," he said on NBC. Rising numbers of hospitalizations and deaths confirm that.

Trump's clashes with science and the scientists around him have been a running story throughout the pandemic. He's often lashed out at Dr. Anthony Fauci, the government's top infectious disease specialist. He's called CDC Director Dr. Robert Redfield "confused" about the timeline for the availability of vaccines.

But the split is only growing wider.

With the arrival of cold weather, the virus risk is greater because people will spend time indoors where it can spread more readily. Contradictory messages from the top don't help.

"The risk is enormous," said Auerbach. "We are literally talking about lives being at stake."