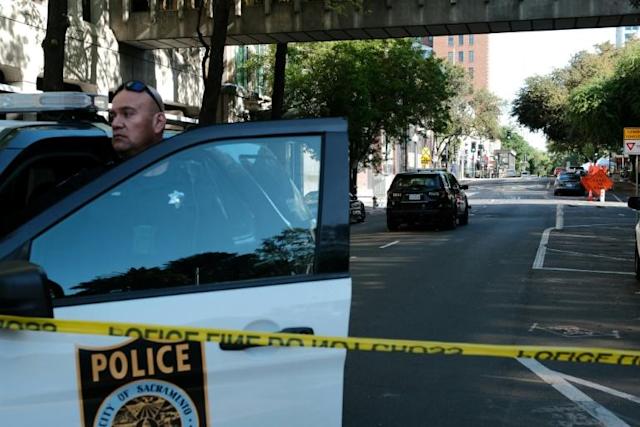 Police investigating a mass shooting in a California city center that left six dead and 12 wounded said Monday they have arrested a man in connection with America's latest bout of fatal gun violence.

More than 100 shell casings were recovered after a gun battle apparently erupted following a fight in downtown Sacramento, as nightclubs were emptying around 2:00 am Sunday.

Police have given no information as to whether anyone was targeted, in the worst such incident in the city's history, or if the shooters were firing indiscriminately.

Detectives worked through the night combing a spread-out crime scene, and on Monday announced the arrest of 26-year-old Dandre Martin.

SWAT teams swooped on three other addresses, with at least one handgun recovered.

Video circulating on social media appeared to show some kind of brawl, followed by the sounds of gunfire and people running.

Police Chief Kathy Lester told reporters that officers on patrol nearby had been alerted by the sound of gunshots, and arrived to find a large crowd and multiple victims.

Video footage of the immediate aftermath showed first responders tending to bloodied victims. The bodies of the dead lay nearby.

Three of those who died were women. All six have now been identified.

"It was just horrific," said community activist Berry Accius, who arrived minutes after the shooting.

"Just as soon as I walked up you saw a chaotic scene, police all over the place, victims with blood all over their bodies, folks screaming, folks crying, people going, 'Where is my brother?' Mothers crying and trying to identify who their child was," he told local broadcaster KXTV.

The shooting happened just blocks from the state capitol and close to the venue where the NBA's Sacramento Kings play.

The Kings hosted the Golden State Warriors on Sunday evening, holding a moment of silence before the game.

Outspoken Warriors coach Steve Kerr said gun laws had to change if tragedies like this were to be avoided.

"It's probably the ninth or 10th moment of silence I've experienced as coach of the Warriors when we mourn the losses of our people who have died in mass shootings," he said, according to the Sacramento Bee newspaper.

"At some point, our government has to decide: Are we going to have some commonsense gun laws? It's not going to solve everything, but it will save lives."

President Joe Biden on Sunday added his voice to calls for action.

"America once again mourns for another community devastated. We must do more than mourn; we must act," he said, reiterating his call for Congress to pass legislation to strengthen restrictions on guns.

Firearms are involved in approximately 40,000 deaths a year in the United States, according to the Gun Violence Archive website.

Lax gun laws and a constitutionally guaranteed right to bear arms have repeatedly stymied attempts to clamp down on the number of weapons in circulation, despite greater controls being favored by the majority of Americans.