One COVID-19 death every 8 minutes in Los Angeles County: CNN

One person dies from the coronavirus every eight minutes in Los Angeles County, according to CNN, quoting local officials on Thursday, highlighting the toll the COVID-19 pandemic has taken on the most populous county in the United States. Over 11,000 residents in the county – with a total population of about 10 million – have died of COVID-19 since the beginning of the epidemic, according to data released by LA County Department of Public Health, among which about half of those deaths have occurred in the past two months.

"People who were otherwise leading healthy, productive lives are now passing away because of a chance encounter with the COVID-19 virus," Barbara Ferrer, LA County Health Director, said on Wednesday, noting that more than 200 residents die in the county every day.

Two weeks ago, according to CNN, Ferrer said there was one COVID-19 death in the county every 10 minutes.

The unprecedented huge number of hospitalized patients and the terrifying rate of increase continue to intensify, and earlier this week, LA County Supervisor Hilda Solis warned that the situation was a "human disaster," adding that local healthcare workers were both physically and mentally exhausted and sick.

LA Ambulance crews, according to CNN, have been told "not to take patients with little chance of survival to hospitals." Even when those patients are lucky enough to get to a hospital, they might "languish outside for hours if there's no more room." 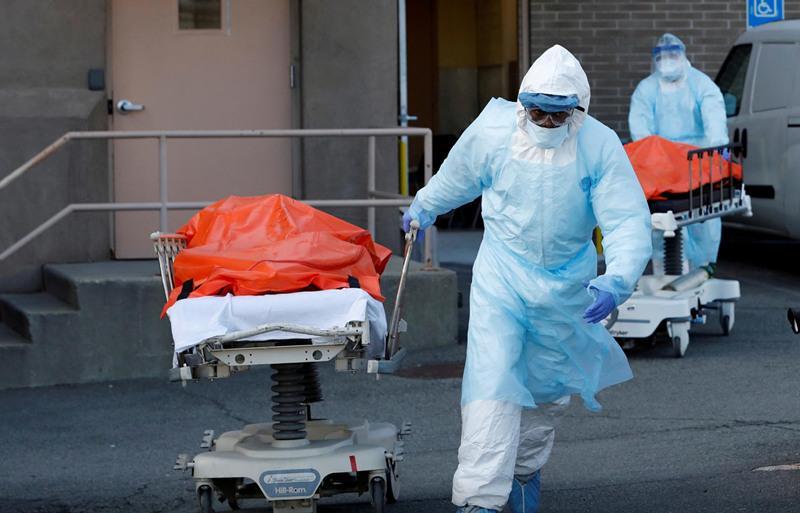 Healthcare workers wheel the bodies of people from the Wyckoff Heights Medical Center during the outbreak of the COVID-19 in the Brooklyn borough of New York City, New York, US, April 4, 2020. /Reuters via CGTN

"Just as we sent doctors from California to places like New York when there was that surge, I'm asking for folks across America, if you can spare a doctor or a nurse, if you can spare anything, please send it here," the mayor told CNN, adding "we're seeing heroes in our hospitals, we're seeing angels in our ambulances stretched thin, to just deal with the onslaught right now of what's happening here at the epicenter."

So far, COVID-19 cases have soared 941 percent since November 1, said Ferrer, and the rate, in January, of new coronavirus cases is twice as high as December.

In the past two months, the rate of those who tested for COVID-19 has jumped from 3.8 percent to 21.8 percent.

Hospitalizations in LA county are 10 times that of what they were on November 1, according to the report, and another sharp increase is expected within the next two weeks, according to local Health Services Director Christina Ghaly.

Currently, over 8,000 patients are hospitalized, with some 19 percent on ventilators and about 20 percent in intensive care units, according to the news network.

Considering the overwhelming demand, local hospitals could be forced into crisis care mode if the surge continues, said Ghaly, warning of patient transfers to other parts of U.S. and putting a hold on elective surgeries in all hospitals.