WORLD One dead as monstrous Hurricane Michael tears into Florida

One dead as monstrous Hurricane Michael tears into Florida

Hurricane Michael claimed its first life after roaring ashore in Florida on Wednesday, flooding homes and streets and toppling trees and power lines in the Gulf of Mexico beachfront area where it made landfall as a raging Category 4 storm.

Florida officials said Michael, packing winds of 155 miles per hour (250 kilometers per hour), was the most powerful storm to hit the state's northern Panhandle area in more than a century.

Michael had weakened to a Category 1, with maximum winds of 90 mph as of 8:00 pm Eastern time (0000 GMT), but that still left it an extremely dangerous storm. 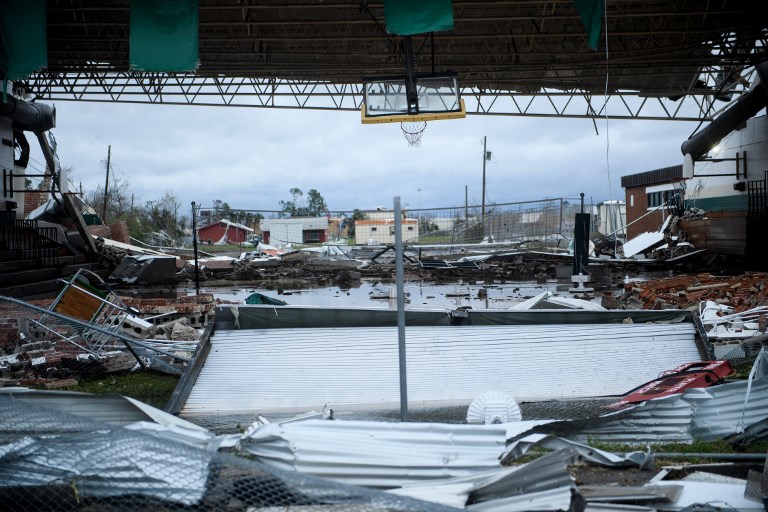 Pictures and video from Mexico Beach -- a community of about 1,000 people where Michael made landfall around 1:00 pm Eastern time (1700 GMT) -- showed scenes of devastation, with houses floating in flooded streets, some ripped from their foundations and missing roofs.

Roads were filled with piles of floating debris.

After being battered for nearly three hours by strong winds and heavy rains, roads in Panama City were virtually impassable and trees, satellite dishes and traffic lights lay in the streets.

"Along our coast, communities are going to see unimaginable devastation," Scott said, with storm surge posing the greatest danger.

"Water will come miles in shore and could easily rise over the roofs of houses," he said.

"Those who stick around to experience storm surge don't typically live to tell about it," said FEMA's Long.

At a rally in Pennsylvania on Wednesday night, Trump offered his "thoughts and prayers" to those in the path of the storm and said he would be visiting Florida soon.

"I'll be traveling to Florida very, very shortly and I just want to wish them all the best. Godspeed," Trump said.

Hundreds of thousands of people were ordered to evacuate their homes and the governor told residents who had not done so to "hunker down and be careful."

Smith, in Gadsden County, said the situation was dangerous even for emergency personnel.

"We've been very cautious with sending our first responders out right now," she said. 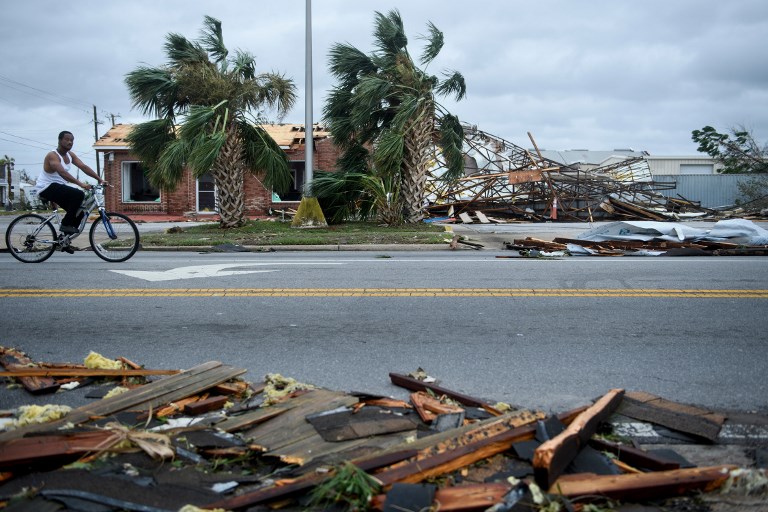 Storm damage is seen after Hurricane Michael in Panama City, Florida on October 10, 2018.

Olivia Smith, public information officer for the Gadsden County Board of County Commissioners, said there was "one hurricane-related fatality," adding that the incident was "debris-related. There was a tree involved."

Smith could not provide details on the victim.

The death, in an area west of state capital Tallahassee, was the first confirmed since Michael made landfall.

General Terrence O'Shaughnessy, commander of North American Aerospace Defense Command, said some Florida residents may have been surprised by the rapid growth of the storm.

"Where that becomes a factor is with the evacuation of some of the local populations," he said. "We haven't seen as robust of an evacuation response from the civilian population that we have seen in other storms."

Several hours after the hurricane made landfall, the eye of the storm had moved out of the Panhandle and was just west of Albany, Georgia, the NHC said.

"Michael should weaken as it crosses the southeastern United States through Thursday," the NHC said.

Long, the head of FEMA, said many Florida buildings were not built to withstand a storm above the strength of a Category 3 hurricane on the five-level Saffir-Simpson Hurricane Wind Scale.

As it came ashore, Michael was just shy of a Category 5 -- defined as a storm packing top sustained wind speeds of 157 mph or above. 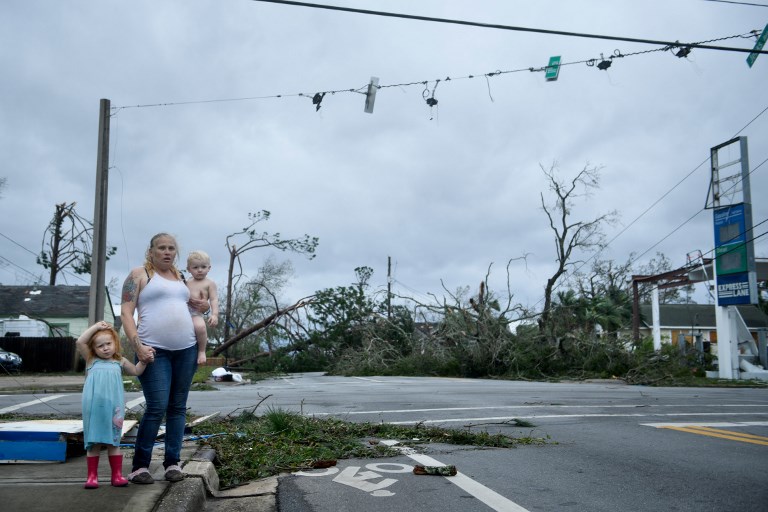 A woman and her children wain near a destroyed gas station after Hurricane Michael in Panama City, Florida on October 10, 2018.

An estimated 375,000 people in more than 20 counties were ordered or advised to evacuate.

The National Weather Service office in Tallahassee issued a dramatic appeal for people to comply with evacuation orders.

"Hurricane Michael is an unprecedented event and cannot be compared to any of our previous events. Do not risk your life, leave NOW if you were told to do so," it said.

Trump issued an emergency declaration for Florida, freeing up federal funds for relief operations and providing the assistance of FEMA, which has more than 3,000 people on the ground.

State officials issued disaster declarations in Alabama and Georgia and the storm is also expected to bring heavy rainfall to North and South Carolina.

The Carolinas are still recovering from Hurricane Florence, which left dozens dead and is estimated to have caused billions of dollars in damage last month.

It made landfall on the coast as a Category 1 hurricane on September 14 and drenched some parts of the state with 40 inches (101 centimeters) of rain.

Last year saw a string of catastrophic storms batter the western Atlantic -- including Irma, Maria and Harvey, which caused a record-equaling $125 billion in damage when it flooded the Houston metropolitan area.

Scientists have long warned that global warming will make storms more destructive, and some say the evidence for this may already be visible.