WORLD One dead, over 100 arrested in unrest over delayed Honduran vote count

One dead, over 100 arrested in unrest over delayed Honduran vote count 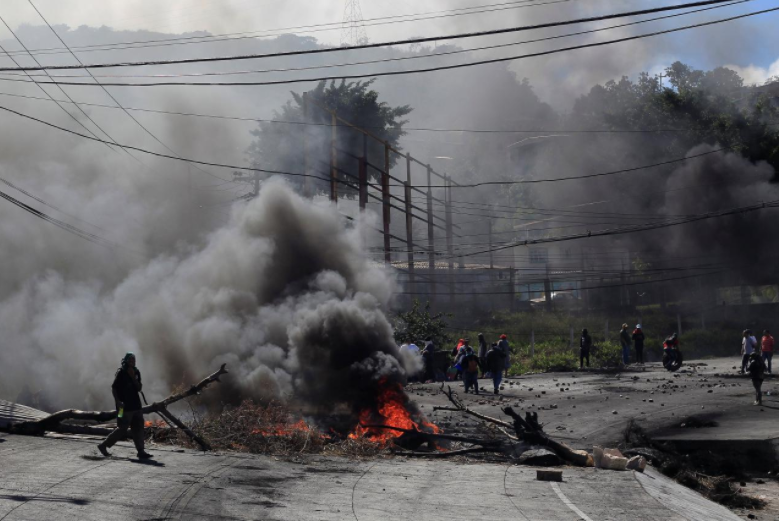 A supporter of Salvador Nasralla walks by a burning barricade settled to block road during a protest, December 1, 2017. PHOTO: REUTERS/Jorge Cabrera

At least one protester died, over 20 people were injured and more than 100 others were arrested for looting in Honduras after a delayed presidential vote count sparked unrest amid opposition accusations of electoral fraud.

Honduras will publish the final result of last Sunday’s presidential election at 9 p.m. local time (0300 GMT) on Friday, the head of the country’s electoral tribunal, David Matamoros, said. The count was halted several times due to technical problems, the tribunal has said.

The electoral court will also hand-count some 1,031 outstanding ballot boxes, or roughly 6 percent of the total, that had irregularities, Matamoros said.

Election results initially favored opposition candidate and TV star Salvador Nasralla by five points with half the votes counted. They then swung in favor of U.S.-backed President Juan Orlando Hernandez after the count came to a halt on Monday and resumed over a day later.

With the regular ballot count completed, Hernandez, of the center-right National Party, had a lead of fewer than 50,000 votes.

Luis Larach, president of business lobby COHEP, told Reuters that the slim, 1.5 percentage point difference between the candidates meant the hand-count would be crucial.

International concern has grown about the electoral crisis in the poor Central American country, which struggles with violent drug gangs and one of the world’s highest murder rates.

Police sources said at least one man had been shot and killed at a protest in the city of La Ceiba, while about 12 members of the military and police force had been injured in demonstrations that snarled traffic outside Honduras’ main port on Friday and around the country.

At least 10 protesters were injured in the capital of Tegucigalpa, according to the city’s Hospital Escuela.

Military officials called for peaceful protests after police reports of looting in the capital and other cities.

In the country’s second-biggest city of San Pedro Sula, thick plumes of black smoke clouded the air as protesters burned tires and police tried to disperse the crowds with tear gas.

More than 100 people were also arrested on suspicion of looting in San Pedro Sula on Friday, a police spokesman said.

People flocked to supermarkets on Friday, stocking up on food and provisions as major roads and supply routes were blocked across the country by angry protesters.

Lines appeared outside gas stations and cash machines. Banks clogged up with people wanting to withdraw or deposit money.

“I‘m filling the tank with gas in case anything happens, the situation looks bad and there are protests all over the city,” said Carlos Valle as he joined a long line of vehicles waiting at a fuel pump in Tegucigalpa.

Both Hernandez and Nasralla, a television game show host allied with leftists, claimed victory after the election, and the challenger has said he will not accept the tribunal’s result because of doubts over the counting process.

Leading a center-left alliance, the 64-year-old Nasralla is one of Honduras’ best-known faces and backed by former President Manuel Zelaya, a leftist ousted in a coup in 2009.

Zelaya weighed into the debate on Thursday in a letter in which he accused the tribunal of “electoral crimes” on behalf of Hernandez, who himself was standing for re-election enabled by a contentious 2015 Supreme Court ruling.

One of the four magistrates on the electoral tribunal on Thursday flagged “serious doubts” about the counting process.

The Organization of American States (OAS) on Wednesday convinced both candidates to vow to respect the final result once disputed votes had been checked.

But a few hours later Nasralla rejected the OAS accord, saying his opponents were trying to rob him. He urged supporters to take to the streets in protest.