WORLD One dead, two injured after a knife attack in Melbourne Bourke Street

One dead, two injured after a knife attack in Melbourne Bourke Street 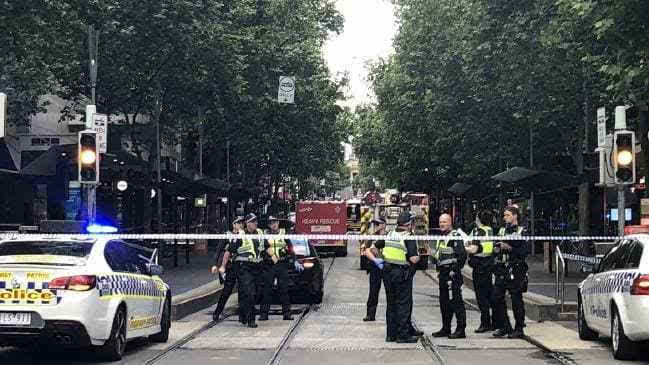 The police cordon off the scene. (Photo: Global Times)

Australian police arrested a man after multiple people were hurt in a knife attack in Melbourne on Friday. The Police confirm that one person has died at the scene and two others are currently in hospital in a press conference. The attacker is in a critical condition under guard in hospital now.

Australian media reported that explosions were heard in Melbourne's Bourke Street and a car caught fire. Police cordoned off the scene, business was suspended near the accident and people were told to stay indoors.

A burning car veers into a sidewalk. (Photo: social media)

A man who works for the city council of Melbourne said he was talking on the phone in the opposite office building when he heard a loud noise. "It's not the normal banging that you hear on the street," he said.

"You can see huge flames and explosions, smoke and a lot of people," said a witness.