One year on, Brazil town remembers 270 killed in dam breach 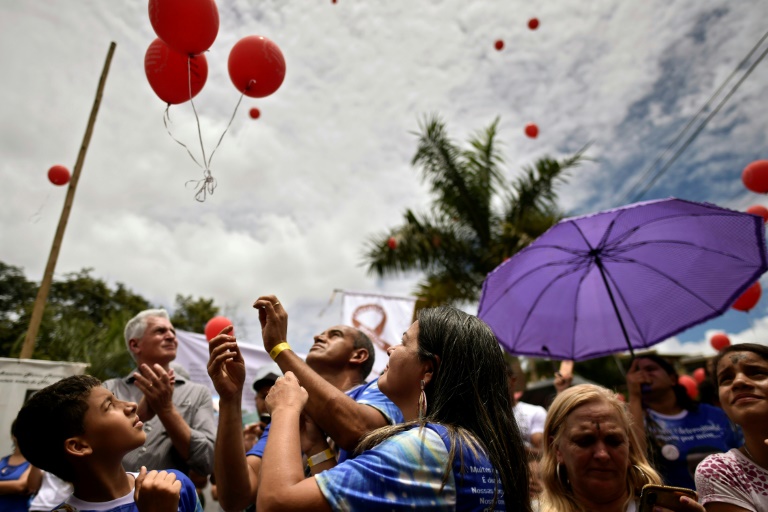 Residents of Brumadinho in southeastern Brazil paid homage on Saturday to the 270 people killed one year ago when a nearby dam burst, spewing millions of tons of mining waste over homes and farmland in one of the country's worst industrial accidents.

Still, in mourning for the people swept away by the tsunami of sludge, some 300 people -- friends and relatives of the victims as well as emergency personnel and local authorities -- held an event to place the first stone in a monument to honor the victims.

"I hope that those who are really to blame will be punished, because you don't play with people's lives," Minas Gerais Governor Romeu Zema said at the event.

At 12:28 pm, the exact time the dam owned by Brazilian mining giant Vale burst one year ago unleashing some 12 million cubic meters of mining tailings, a much larger crowd gathered at the Brumadinho town entrance to hold a minute of silence in memory of the victims.

Page-sized photographs of the victims in clear plastic sleeves were placed on the ground and strung up on cables at the outdoor memorial.

Earlier a group of people went to the same site and hung a large sign that read "365 Days of Suffering and Impunity."

The official death toll is 259, but firefighters are still picking through the dried mud for the bodies of 11 people listed as missing but certainly dead.

Pope Francis also weighed in, asking the faithful via his social media accounts to pray for the "brothers and sisters who were buried" in the mudslide. He also lamented "the polluting of the whole river basin."

Brumadinho residents who were left homeless by the disaster were not the only victims: farmers and fishermen in the basin of the Paraopeba and Alto San Francisco rivers, where the sludge flowed to on its meandering trip to the Atlantic Ocean, saw their livelihoods destroyed by widespread pollution.

Those rivers still show "deep scars" from the disaster, according to a report released Thursday by the Brazilian environmental NGO SOS Mata Atlantica.

The water quality is "bad or awful" in 20 of the 21 points on the rivers that were studied, the NGO said.

Brumadinho, with a population of some 40,000, will never be the same, despite nearly two billion reais (about $480 million) in compensation that Vale was forced to pay.

On Tuesday, state prosecutors charged the ex-boss of Vale Fabio Schvartsman and 15 others with intentional homicide in the dam collapse.

Vale and its German auditor TUV SUD, which had certified the dam's stability, have been accused of environmental crimes.

Both Vale and Minas Gerais officials have since tightened security measures for mining and implemented emergency evacuation plans in areas near the dams that are considered "at risk."

The dam breach was caused by an accumulation of water and a lack of drainage, according to a report commissioned by Vale and published last month.