WORLD One year on, Floyd's 'I can't breathe' plea still haunts US

One year on, Floyd's 'I can't breathe' plea still haunts US

WASHINGTON, May 25 (Xinhua) -- Tuesday marked the first anniversary of the death of George Floyd, a 46-year-old African American, who was killed after a white police officer had knelt on his neck for nine minutes and 29 seconds. Before his death, Floyd pleaded "I can't breathe" for more than 20 times, but no one paid heed. 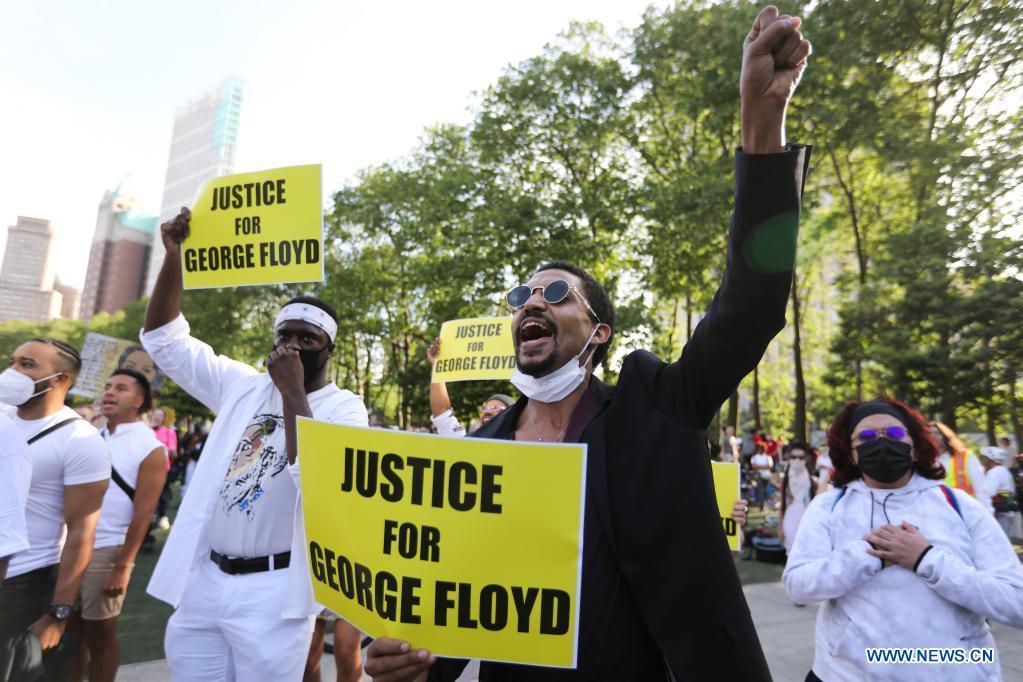 People attend a rally to mark the one-year anniversary of George Floyd's death in Cadman Plaza Park in New York, the United States, May 25, 2021. (Xinhua/Wang Ying)

The words have hung heavy in the air for the past year, echoing in months of protests against police brutality and racial injustice across the United States and globally.

One year on, what has changed?

On the one-year anniversary of Floyd's death, people walked into George Floyd Square, the renamed intersection where Floyd died in Minneapolis, U.S. state Minnesota, laying flowers and paying their respect.

However, multiple gunshots were heard nearby the square on Tuesday morning, just hours before a family-friendly street festival there to mark the anniversary. One person was shot with non-life-threatening injuries, police said.

Governor Tim Walz asked all Minnesotans to observe a moment of silence for nine minutes and 29 seconds on Tuesday in honor of Floyd, recognizing the state demands "meaningful change" following the African American's death.

"George Floyd's murder ignited a global movement and awakened many Minnesotans and people around the world to the systemic racism that our Black communities, Indigenous communities, and communities of color have known for centuries," the governor's proclamation reads.

The National Association for the Advancement of Colored People (NAACP), a leading U.S. civil rights organization, also held a moment of silence for Floyd on its Facebook page.

Outside the White House where President Joe Biden privately met with Floyd's siblings and daughter on Tuesday afternoon, dozens of people carrying "Stop Killing Us" and "Rest in Peace George Floyd" banners, laid single long-stemmed roses in a semicircle on earth, bowed their heads and observed a moment of silence to commemorate Floyd.

In New York City, some Black Lives Matter protesters on Tuesday morning marched through downtown streets and blocked an entrance to the Holland Tunnel before being removed by police officers, local media reported.

The "Rise and Remember George Floyd" events, including protests, candlelight vigils, panel discussions and artwork display, were also observed in Los Angeles, Houston, Dallas, Chicago, Seattle, St. Paul and some other U.S. cities in days ahead of or on the anniversary.

Floyd's "I can't breathe" plea "was a sentimental statement ... that I felt resonated with everyone," Jenne Henry, a student living in Washington, D.C., told Xinhua.

Around 20 million Americans, flouting coronavirus restrictions, joined some 7,750 demonstrations in more than 2,440 locations across every U.S. state in the wake of Floyd's death last summer, the largest-scale racial justice protests in generations, according to data from The Economist weekly.

"TOO MANY STILL CAN'T BREATHE"

"It has been a long year. It has been a painful year," Floyd's sister Bridgett Floyd told a rally in Minneapolis on Sunday, "It has been very frustrating for me and my family for our lives to change in the blink of an eye -- I still don't know why."

She made the remarks outside the court where Derek Chauvin, the former city police officer who knelt on Floyd's neck, was convicted of murder in April. Three other former officers are awaiting trial on aiding and abetting charges.

There are changes observed: Floyd's name, together with his plea "I can't breathe," has become a symbol in the fight for racial justice and police reform in the country.

In a rare example of swift justice, Chauvin has become a similarly rare police officer convicted for death of a black during an arrest. The Black Lives Matter movement has gained new momentum and staged protests home and abroad.

In the wake of Flyod's death, more than 30 U.S. states and dozens of large cities have enacted new policing rules such as banning neck restraints and requiring police officers to intervene when a fellow officer uses extreme force, local media reported.

However, major changes appear to have stalled. Police reform legislation, known as the George Floyd Justice in Policing Act, has been deadlocked in the evenly split Senate amid fierce partisan fights. Democrat and Republican lawmakers are sparring when it comes to banning chokeholds, no-knock warrants and qualified immunity.

The White House previously set a deadline for Congress to pass the bill before the one-year anniversary of Floyd's death, which apparently has not been met.

"Unfortunately there's too much polarization. You know this mob mentality -- if you're not with me, you're against me -- that type of deal. I feel like that's how people are seeing things," Henry told Xinhua.

In fact, the "I can't breathe" plea didn't prevent more police violence from happening. Through the first four months this year, police officers continued to kill about three Americans per day on average, virtually the same as before Floyd's murder, said a Politico report, citing data from Mapping Police Violence, a research collaborative that uses a variety of state and regional databases to determine the number and nature of most but not all police-involved deaths.

Many do not believe that Chauvin's murder conviction for Floyd's death has led to serious change, and most African Americans said the conviction did not improve their trust in the U.S. criminal justice system, a recent poll from The Associated Press showed.

"We are different colors and as a result, we have experienced different realities. A black teen growing up in an inner city has little in common with a white teen in a wealthy enclave," Alveda King, a niece of Martin Luther King Jr., said on Tuesday, calling for healing the nation's racial scars peacefully.

"After all the outrage, the demonstrations, the promises for reform, and the guilty verdict in Chauvin's trial, we believe that little progress truly has been made," Antjuan Seawright, a Democratic political strategist, and Jessica Tarlov, head of research at Bustle Digital Group, wrote in an essay published by The Hill on Tuesday.

"Momentum for reform appears to be waning," they sighed. "We're not satisfied because too many still can't breathe."