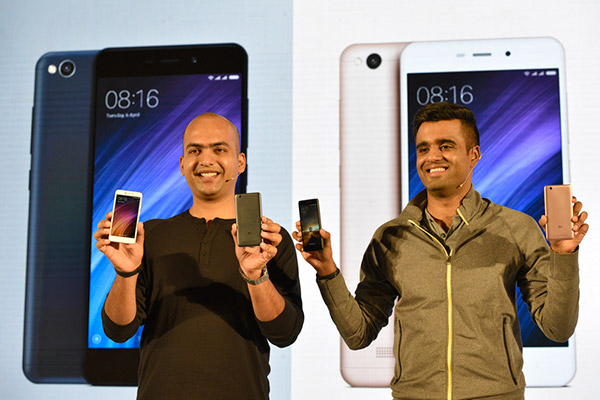 Manu Jain, vice-president and managing director of Xiaomi India and Jai Mani, product lead of Xiaomi India pose with Xiaomi Redmi 4A during its launch on March 20, 2017 in New Delhi, India. （Photo/VCG）

The sale of smartphones through online retailers like Flipkart and Amazon is picking up in India these days, and it is expected that online sales of smartphones are set to cross the 50-million mark in a year for the first time this year.

The craze among smartphone buyers from online retailers is mainly due to huge discounts, buy-back offers and easy financing options offered by them. The ongoing festive season too witnessed aggressive marketing gimmicks by these e-commerce retailers.

According to local media reports, the research firm CMR estimates the online sales of smartphones in the fourth quarter of 2018 will increase by 60-65 percent year-on-year basis, while off-the-shelves purchases are likely to fall 4-6 percent.

Counterpoint Research has projected that online sales of smartphones in India in 2018 will cross 50 million units, compared with 45 million in 2017.

"With the onset of festival season, more smartphone vendors in partnership with e-commerce players are offering discounts which when clubbed with other exciting offers result in an overall 50-60 percent discounting on final purchase - which cannot be matched by offline channel partners," English daily The Economic Times quoted Upasana Joshi, associate research manager-client devices at International Data Corporation (IDC), as saying.

Counterpoint Research, on the other hand, has projected a 51 percent increase in online sales of smartphones and 11 percent for offline sales.

Meanwhile, according to market analysts, the expected spurt in online sales is likely to result in an overall increase of 25 percent in sales of smartphones in the quarter ending December.