Only one UK firm in five ready for no-deal Brexit 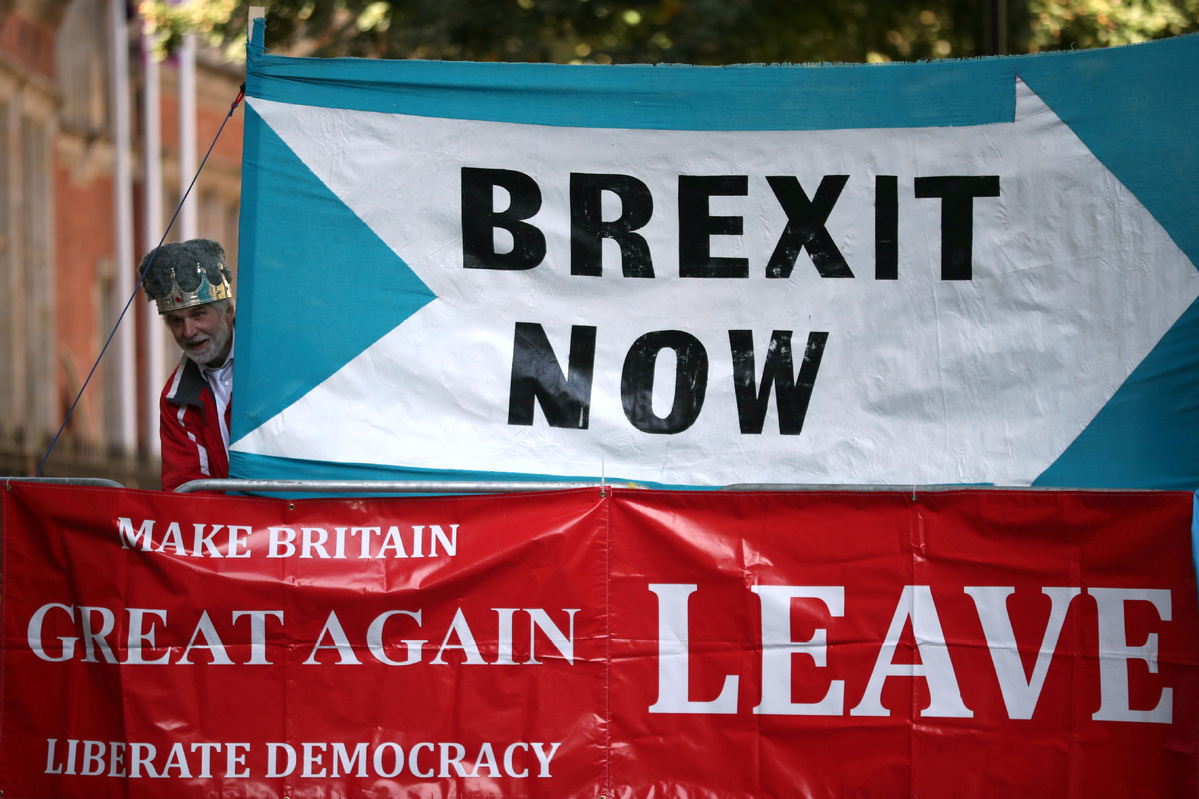 A crown-wearing pro-Brexit demonstrator stands next to banners outside the Supreme Court of the United Kingdom, in London, Britain September 18, 2019. (Photo: Agencies)

Four British companies in every five are woefully underprepared for a no-deal Brexit, according to a new survey of supply-chain managers.

The Chartered Institute of Procurement and Supply's study, which was published on Wednesday, found only 22 percent of United Kingdom companies have completed the four steps it says are needed to continue trading with suppliers in the European Union.

The institute, which is also known as Cips, conducted a similar survey in March and found 14 percent of UK enterprises had completed the four steps, meaning there has been a small improvement in the six months since then, but not a significant enough change to avoid queues at borders following a no-deal Brexit.

John Glen, an economist at Cips, told the Financial Times the findings show "with the Brexit deadline just weeks away, the government faces an uphill battle to get businesses ready in time".

The four steps relate to whether companies have an "EORI" number – which is necessary to interact with EU customs authorities – as well as whether they know how to fill in a customs declaration, whether they have agreed responsibilities with a customs agent or logistics provider, and whether they are familiar with the software needed to submit customs documents.

The Cips survey found that many enterprises hope to avoid the worst of any anticipated disruption by importing goods earlier than they would ordinarily have done, something that has had the knock-on effect of snarling up the nation's warehousing space.

But Peter Ward, the chief executive of the UK Warehousing Association, told the Financial Times that inquiries from companies seeking additional warehouse space are still only about half the level they were in the weeks leading up to the ultimately abandoned March 2019 Brexit deadline, something he attributes to "Brexit fatigue".

"The Oct 31 deadline couldn't have come at a worse time, clashing with peak season in logistics in the run-up to Christmas, including Black Friday and Cyber Monday," he said.

The Cips survey quizzed 817 supply-chain managers at companies involved in 11 sectors of the British economy.

The government is encouraging businesses to get ready for the Oct 31 Brexit deadline through its recently launched Prepare for Brexit information campaign.

Meanwhile, documents prepared by the UK's Department for Transport that were leaked to the Financial Times suggest disruption caused by UK companies not having the correct customs documents would be serious. The papers show the government anticipates EU ports will turn trucks away if drivers do not have the right paperwork, rather than let them queue dockside.

Other government documents quoted by the Guardian newspaper show London's own planning for a no-deal Brexit includes the expectation that 85 percent of freight trucks attempting to cross the English Channel may be bumped by French customs authorities.

The Guardian newspaper said UK companies are responding by stockpiling beer, wine, and spirits,in a bid to keep the alcohol flowing at Christmas.

Glen, the Cips economist, said: "It's particularly wine from the EU. Companies have bought well ahead of Christmas this year, due to potential disruption at the ports and to try and avoid depreciation in the value of sterling against the euro."

Britain is France's biggest export market for champagne, quaffing 26 million bottles a year, which is worth billions to the French economy.