WORLD Only through solidarity can world beat COVID-19: Chinese FM

Only through solidarity can world beat COVID-19: Chinese FM 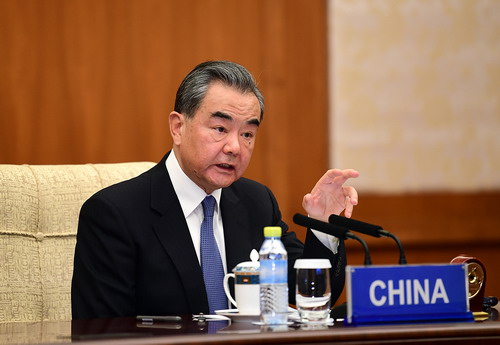 BEIJING, April 18 (Xinhua) -- Chinese State Councilor and Foreign Minister Wang Yi on Friday said only through solidarity can the international community win the battle against COVID-19.

Wang made the remark in a phone conversation with Emmanuel Bonne, diplomatic counselor to French President Emmanuel Macron.

Wang said China is paying great attention to the development of the epidemic situation in France and Europe, and the series of prevention and control measures taken by the French government are delivering positive results.

The Chinese foreign minister said he believes that under the strong leadership of President Macron, the French side will surely overcome the epidemic at an early date.

Recently, despite the difficulties it faces, China has been doing its best to provide assistances to France in purchasing medical and epidemic prevention materials in China and transporting them to France, Wang noted.

He said China will continue to provide firm support for France's fight against the epidemic until the end.

Wang pointed out that China and France, both as permanent members of the UN Security Council, should maintain mutual understanding, mutual trust and mutual support at this critical moment for the human society and play their due roles in international cooperation against COVID-19.

China fully agrees with France's appeal for international solidarity in this global fight, as the virus is a common threat to the health security of mankind, said Wang.

Any attempt to undermine unity and mutual trust or even the act of buck-passing is detrimental to the domestic fight against COVID-19, and also hurts international anti-pandemic cooperation, he added.

Wang noted that the World Health Organization (WHO), as a specialized agency of the United Nations (UN), has been playing a positive leading role in response to COVID-19.

He said China and France need to continue to safeguard the status of the WHO and encourage the agency to play a due role in international anti-pandemic cooperation.

For his part, Bonne thanked China for its support for France's purchase of medical materials in China.

The French side has called on all countries to be united in the fight against the pandemic, said Bonne, adding that France, like China, firmly supports the work of the WHO and its director-general Tedros Adhanom Ghebreyesus.

France stands ready to work with China to enhance cooperation in the global COVID-19 fight, discuss the drafting of an action plan on uniting the world, and enhance communication and coordination in multilateral mechanisms such as the UN Security Council.

The two sides also exchanged views on how to enhance cooperation between the UN Security Council permanent members in the global COVID-19 fight.