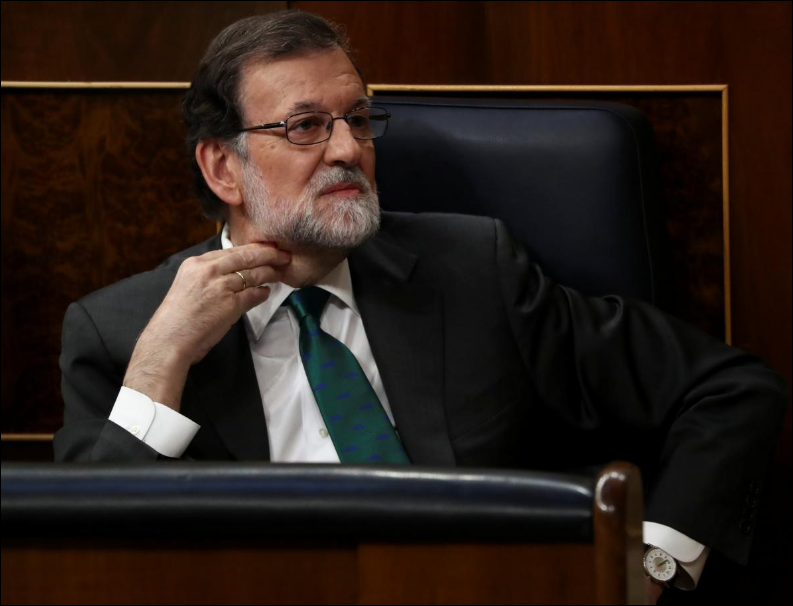 Spain's Prime Minister Mariano Rajoy gestures at the start of a debate on a motion of no confidence at Parliament in Madrid, Spain, May 31, 2018. (Photo: Reuters)

Spanish Prime Minister Mariano Rajoy’s hours in office appeared numbered on Thursday after a Basque political party said it would back a no-confidence vote over a corruption case, paving the way for Socialist leader Pedro Sanchez to take power.

Support from the Basque PNV party gives Sanchez 180 votes in parliament to become prime minister, more than the absolute majority of 176 votes he would need to take power immediately if the no-confidence vote is held on Friday as scheduled. Rajoy could slow that transition if he were to resign before the vote.

With most Spanish parties in favor of respecting EU fiscal rules, however, investors appeared to see less risk of an abrupt policy shift than in Italy, where parties have thrown doubt on the commitment to the euro single currency. News of Rajoy's likely downfall sent Spain's blue-chip index Ibex .IBEXdown 1.5 percent at 1530 GMT, erasing a 0.9 percent gain earlier in the day, but did not trigger a major sell-off.

Resigning before the vote takes place on Friday would spare Rajoy the humiliation of becoming the first Spanish prime minister to lose a no-confidence vote. He did not attend the afternoon session of the debate on Thursday.

If he resigns, the government of his People’s Party would go into caretaker mode until a new prime minister is sworn in, which could take several weeks or months. If the vote goes ahead and Rajoy loses, Sanchez would immediately replace him.

“Are you ready to resign? Resign today and leave by your own will,” Sanchez told Rajoy. “You are part of the past, of a chapter the country is about to close.”

The Basque PNV had backed Rajoy’s budget as recently as last week but it decided to remove its support after dozens of people linked to the ruling People’s Party (PP) were sentenced to decades in prison in a long-running corruption trial.

Sanchez said that if he took power he would stick to the budget approved by Rajoy, and would also seek to start a new dialogue with the restive region of Catalonia.

Defending his record on Thursday, Rajoy told deputies his centre-right PP has a wide majority of members who are “decent and honest”.

“The Socialists have left us with a ruined country and we brought back growth and jobs,” he said, adding that Sanchez was trying to put together a “Frankenstein” government that would damage the economy.

Two Catalan pro-independence parties as well as leftist Podemos, a relative newcomer, another small Basque group and a party from the Canary Islands have said they will back Sanchez.

Jose Luis Abalos, the member of parliament in charge of formally presenting the motion on behalf of the Socialists, told PP deputies that the court ruling had triggered a wave of indignation across the country.

“While families were suffering the crisis, you were becoming millionaires,” he told PP members in parliament.

Rajoy, whose minority government has struggled after two inconclusive elections in 2015 and 2016 ushered in the most fragmented parliament since democracy returned to Spain in the 1970s, is also coming under fire for a perceived inability to solve a secession crisis in Catalonia.