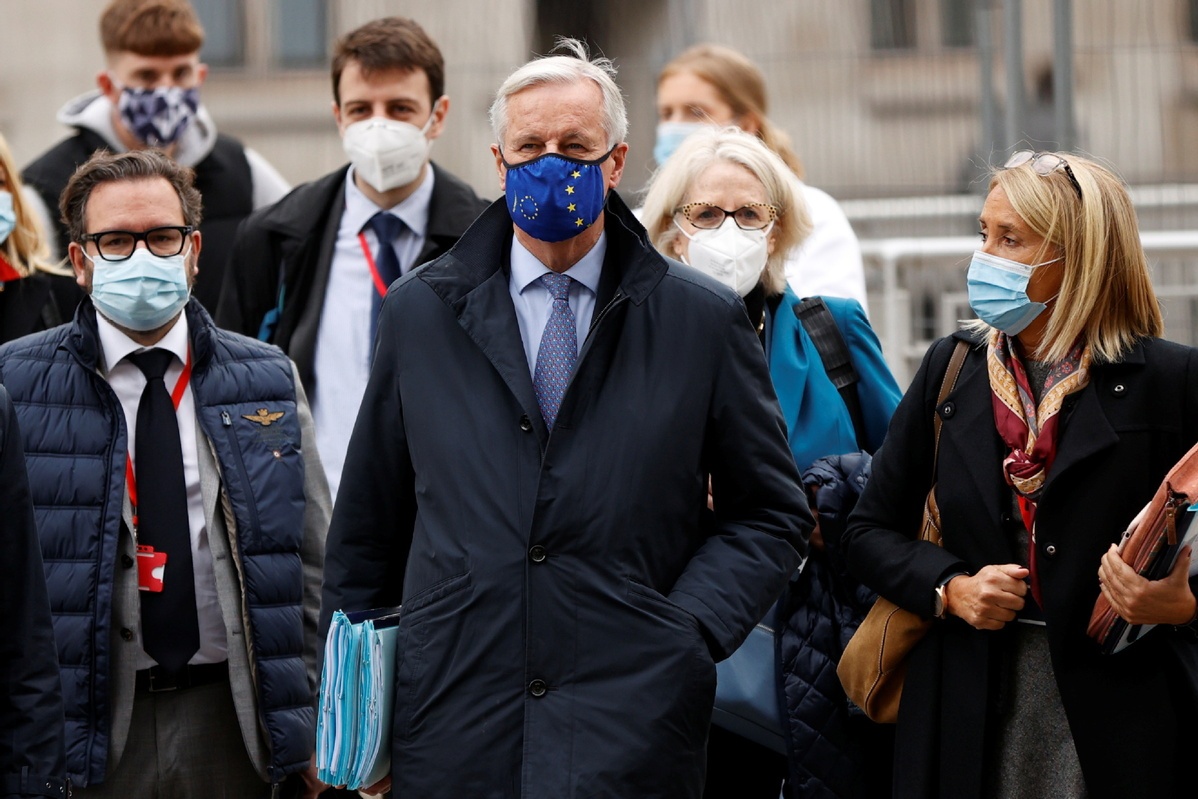 EU chief negotiator Michel Barnier was planning to extend a visit to London until Wednesday amid cautious optimism over the progress of post-Brexit trade talks with Britain, according to media reports.

The European Union negotiating team had been due to return to Brussels on Sunday. The Sunday Telegraph reported that the British team would travel to Brussels on Thursday for more talks and that next Saturday had in effect become the deadline to decide whether the two sides could reach a deal.

Talks between the parties had resumed on Thursday in pursuit of a free-trade deal, a week after a missed deadline led London to declare them over. The talks continued on Friday, Reuters reported, in an effort to avoid a tumultuous finale to the five-year Brexit crisis.

United Kingdom Prime Minister Boris Johnson had called for an end to the negotiating process that began after the country left the bloc on Jan 31. He said on Oct 16 there was no point in continuing talking, unless discussions could be accelerated and taken to the next stage.

Brussels responded by saying it was ready to do just that.

The resumption of talks between the massively interdependent trading partners followed video calls between Barnier and David Frost, his UK counterpart.

Last week The Financial Times said the two sides had hoped to talk on a daily basis without weekend breaks, until a deal is finalized.

On Wednesday Barnier told the European Parliament: "An agreement is within reach if we are, on both sides, prepared to work constructively and in a spirit of compromise."

He also insisted that the EU is not seeking to undermine UK sovereignty.

His comments assuaged UK concerns, and a spokesman for the prime minister said in a statement: "It is clear that significant gaps remain between our positions in the most difficult areas, but we are ready, with the EU, to see if it is possible to bridge them in intensive talks."

Johnson had earlier called for the bare bones of a deal to be in place before a summit of EU leaders on Oct 15 and 16.

When that was not the case, and after EU leaders at that summit called on the UK alone to shift ground to the EU position, Johnson declared the talks over.

Senior UK officials now believe the bloc has accepted it too must compromise.

The talks had become bogged down in three areas: access to fishing grounds, the extent to which nations should be allowed to subsidize businesses, and ways in which future disputes between the two sides should be resolved.

The BBC reported earlier that the UK government had welcomed the return of the EU negotiating team to London.

Since leaving the EU at the end of January, the UK has continued to trade with the bloc as if it were still a member. That arrangement ends on Dec 31, after which the UK will revert to trading with the EU under World Trade Organization rules, if a trade agreement is not reached.