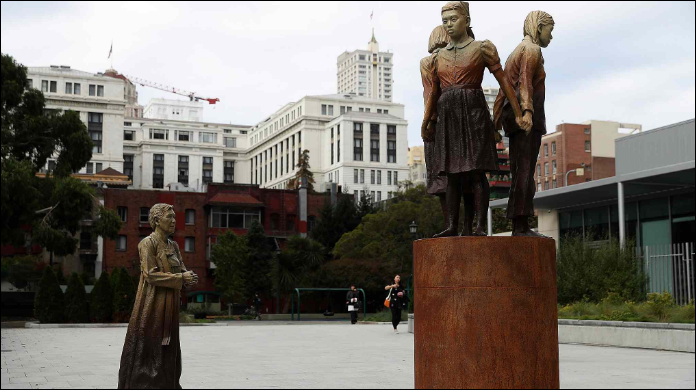 The Japanese city of Osaka has ended its six-decade "sister city" ties with US' San Francisco over the display of a statue that honors the survivors of the Japanese military's sexual slavery atrocities during World War II, euphemistically known as "comfort women."

The statue, entitled Women's Column of Strength, was set up by private groups in San Francisco and was later given to the city as a gift.

It consists of three women in bronze – from Korea, China and the Philippines – who are holding hands in a circle as they look into the distance. An older woman stands to the side.

Yoshimura's decision to end Osaka's sisterhood with the city, which dates back to 1957, was first announced in November last year, but the move was delayed following the death of San Francisco mayor Ed Lee in December.

Yoshimura called the information an "interpretation" that has yet to be proved, adding that the number of women who were enslaved and how they were treated during their time in captivity were embellished.

He also said the statue singled out Japan for atrocities and that raising awareness about sex trafficking "should consist of words equally applicable to all countries."

In a statement, San Francisco's mayor London Breed said it was impossible to cut the ties between the two cities, which have enjoyed a relationship "for over 60 years."

"One mayor cannot unilaterally end a relationship that exists between the people of our two cities," she said.

The San Francisco mayor's statement went on to say the memorial is "a symbol of the struggle faced by all women who have been, and are currently, forced to endure the horrors of enslavement and sex trafficking."

"These victims deserve our respect and this memorial reminds us all of events and lessons we must never forget."

The Japanese government has been refusing to acknowledge legal responsibilities for the "comfort women" issue so far.