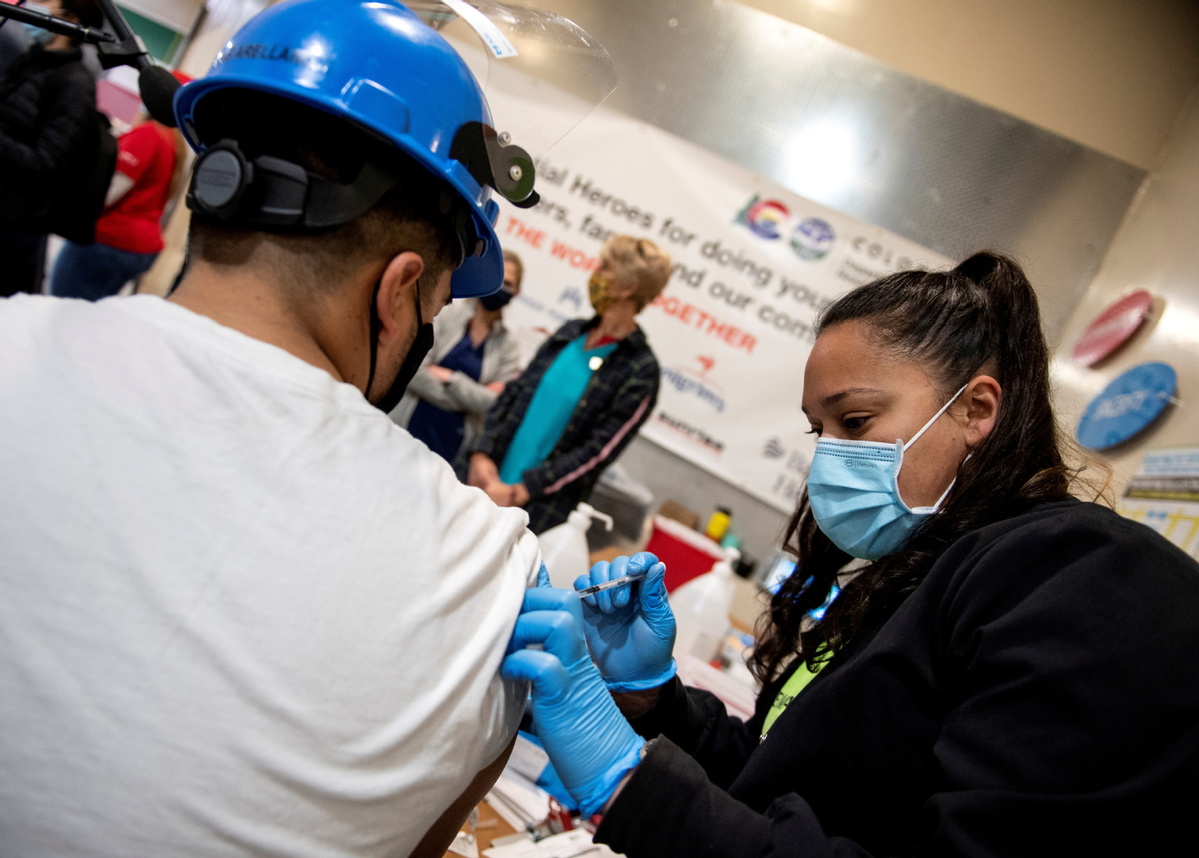 The US Occupational Safety and Health Administration on Wednesday suspended its requirement that employees at companies with 100 or more workers be vaccinated against COVID-19 or tested weekly by Jan 4, in light of a federal court's ruling.

Also, 34 challenges to the vaccine mandate for private employers will be consolidated in the 6th Circuit Court of Appeals in Ohio. The Cincinnati-based court was selected Tuesday in a random drawing using ping-pong balls, a process used when challenges to certain federal agency actions are filed in multiple courts.

Eleven of the 16 full-time judges in the 6th Circuit were appointed by Republican presidents, six by former president Donald Trump.

On Friday, the 5th Circuit Court in New Orleans granted a stay in a lawsuit seeking to block the mandate filed on behalf of various companies, religious groups, private citizens and the states of Texas, Louisiana, Mississippi, South Carolina and Utah.

OSHA said Wednesday it "has suspended activities related to the implementation and enforcement" of the requirement "pending future developments in the litigation".

Meanwhile, the White House announced Wednesday that it is offering funding to drug companies to expand mRNA vaccine production by 1 billion doses a year by the second half of 2022.

In Oklahoma, a dispute between the governor and the Pentagon over the vaccine mandate is setting up a test of the military's authority to require National Guard troops to get immunized.

Acting on an order from Republican Governor Kevin Stitt, the state's adjutant general sent a memo telling troops that they aren't required to get the vaccine and "no negative administrative or legal action" would be taken against them if they refuse.

A senior defense official told reporters Wednesday that a governor does not have the authority to relieve Guard members of their military medical readiness requirements.

Meanwhile, a surge in coronavirus cases with winter about a month away has hit at least 21 states, while hospitalizations also are rising in areas even with high vaccination rates. More than 767,000 Americans have died from COVID-19 as of Wednesday, data from Johns Hopkins University shows.

Federal data show that the daily case average is now 78,500, a 23 percent increase over the past two and a half weeks, according to ABC News.

Vermont, a state where 72 percent of the population is vaccinated against COVID-19, saw 50 percent more coronavirus cases on average over the past two weeks.

The Vermont Health Department reported that there were 222 new coronavirus cases in the state out of a total of 45,024 on Nov 15. At least 52 people are hospitalized, 11 in the intensive care unit (ICU).

On Nov 11, there were 591 cases in Vermont, its highest case count on record.

Grand Isle County, which has the highest vaccination rate, had 160.

"The leadership of [Governor Phil Scott], the work really early on with our most vulnerable population the elderly, and the rural, less dense nature of our state [helped]," Tracy Dolan, former deputy commissioner for the Vermont Health Department Dolan told China Daily.

The US saw its first national increase in hospitalizations this week in 10 weeks, ABC News reported. There were at least 47,000 patients with COVID-19 in hospitals as of Tuesday, an increase of 2,000 patients since Nov 8.

In Colorado, 94 percent of ICU beds were full as of Nov 12, and non-emergency surgeries were suspended to handle the crisis.

In New Mexico, the seven-day rolling average of COVID-19 cases is 1,000 per day, according to data from the state. It has risen 48 percent on average, over the last two weeks.

Idaho, one of the nation's least vaccinated states with 55.9 percent of residents 12 and older fully vaccinated, is among states seeing a surge in recent COVID-19 cases. Up until Nov 13, it had 299,849 cases and 3,745 deaths.

At least 68.8 percent of Americans age 12 and over are fully vaccinated against COVID-19. But the unvaccinated are still at a greater risk of contracting or dying from the virus, according to the Centers for Disease Control and Prevention (CDC).

Several states have approved COVID-19 booster shots for anyone age 18 or over in a bid to stop the surge.

Louisiana's health department on Wednesday recommended that anyone 18 and older get a booster if they've already been vaccinated.

New York City also reported a rise in coronavirus cases. The average of daily cases was 1,074 as of Sunday, 32 percent higher than it was two weeks ago. According to the city's website, 80.3 percent of New York City adults are fully vaccinated.

New York City Health Commissioner Dr Dave Chokshi issued an advisory on Monday authorizing all adults age 18 and over who want to receive a booster shot are eligible, as long as they had their last dose of the Moderna or Pfizer vaccine six months ago.

When asked by the New York Post why a vaccine mandate applies to an outdoor event, Chokshi replied that "the fact that we'll have such a large crowd and people will be in close quarters — anyone who spent New Year's Eve in Times Square knows that it's very difficult to maintain distance".