Caracas— Ousted Caracas Mayor Antonio Ledezma said he plans to take his fight against Venezuela’s socialist government to Europe after he escaped house arrest and fled to Colombia on Friday. The flight was an apparent embarrassment for security forces who had been keeping close watch over one of Venezuela’s most prominent opposition leaders.

“I’m more useful fighting for Venezuela’s democracy abroad than I am as a hostage at my home,” Ledezma told The Associated Press in a phone interview minutes before boarding a Madrid-bound plane in Colombia’s capital.

He said the decision to flee Venezuela was his alone, kept secret even from his family, which has been living abroad. He provided no details of how he sneaked past the Sebin intelligence police officers stationed 24 hours a day outside his residence, but said that during the long, nighttime drive past several national guard checkpoints to Venezuela’s western border, he relied on the help of members of the security forces he described as increasingly fed up with President Nicolas Maduro.

“This decision I took consulting only my conscience,” he said, adding that he had spoken by phone to Colombian President Juan Manuel Santos, who offered his support.

Colombian immigration authorities said in a statement that Ledezma entered the country legally after crossing the Simon Bolivar bridge separating the two countries. There was no immediate reaction from the Venezuelan government.

As Venezuelans were waking up to the news of Ledezma’s escape and resurfacing in Colombia, several heavily armed police officers surrounded his residence in Caracas.

Ledezma, 62, was removed as mayor of Caracas and detained in 2015 on charges of plotting to oust Maduro. After a few months in jail he was released and placed under house arrest due to health issues.

He was one of the leaders of anti-government in protests that rocked Venezuela in 2014 that also led to the jailing of other prominent opponents, including his former cellmate Leopoldo Lopez, who remains under house arrest.

He said the decision to abandon his homeland was driven by unspecified threats intended to force the opposition to resume politically fraught negotiations with the government. Ledezma was forcibly taken from his home in the middle of the night in August and thrown back in jail for a few days as the government cracked down on opponents following criticism of a vote granting the ruling party nearly unlimited powers. 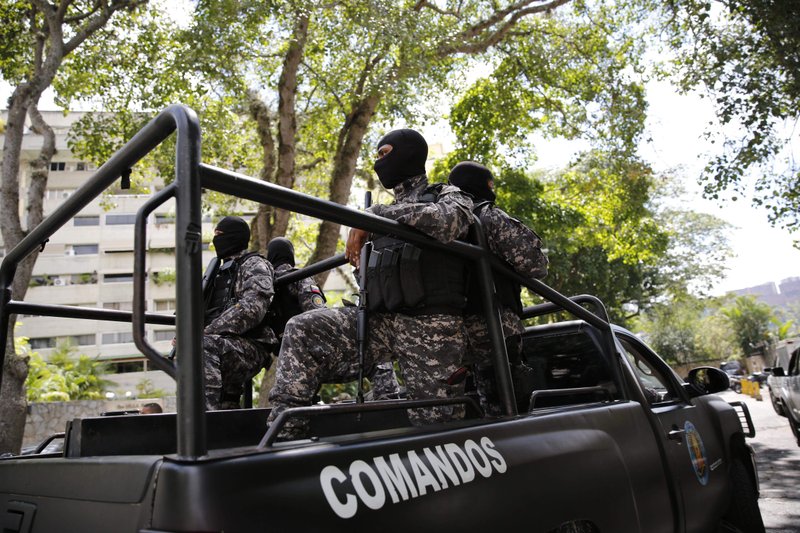 Ledezma has adamantly criticized other members of the opposition alliance for being too accommodating with the government. Lawmakers from his Alliance for the Brave People political party were among a small group of hardliners who this week formed their own parliamentary bloc after the main opposition alliance sent representatives to the Dominican Republic to discuss an agenda for future talks with senior officials. Those negotiations are slated to begin Dec. 1 under international mediation from six nations, including Maduro’s leftist allies Nicaragua and Bolivia.

“I’ve never been an enemy of dialogue, but these talks are a joke,” Ledezma said.

Having outlasted months of deadly unrest and consolidated his grip on power, Maduro is hoping he can convince the opposition to sign off on plans to restructure Venezuela’s foreign debt as U.S. financial sanctions exacerbate the country’s economic misery. Years of mismanagement and decline in oil output have brought Venezuela’s economy to its knees, with inflation running in the triple digits and many people struggling to eat three meals a day.

This week, several ratings agencies and a finance industry group said Venezuela had defaulted on its foreign bonds after missing several payments. Maduro has blamed a financial “blockade” imposed by the Trump administration for delaying payments and said Venezuela will continue to honor its debt, as it has for years.

Maduro is betting that talks with the opposition will help him get backing for a plan to restructure the $120 billion debt, about half of which consists of dollar-denominated bonds. Meanwhile, his opponents want guarantees that presidential elections scheduled for next year will be fair and transparent after widespread international condemnation of vote rigging in recent gubernatorial elections that pro-government candidates swept despite widespread rejection of Maduro.

Hundreds of thousands of Venezuelans have crossed into Colombia fleeing their nation’s volatile economy and political hostility in recent years, many crossing through the same bridge that Ledezma took. Thousands of others cross through hundreds of “trochas,” unpaved dirt roads along Venezuela’s porous 1,370-mile (2,200-kilometer) border with Colombia.