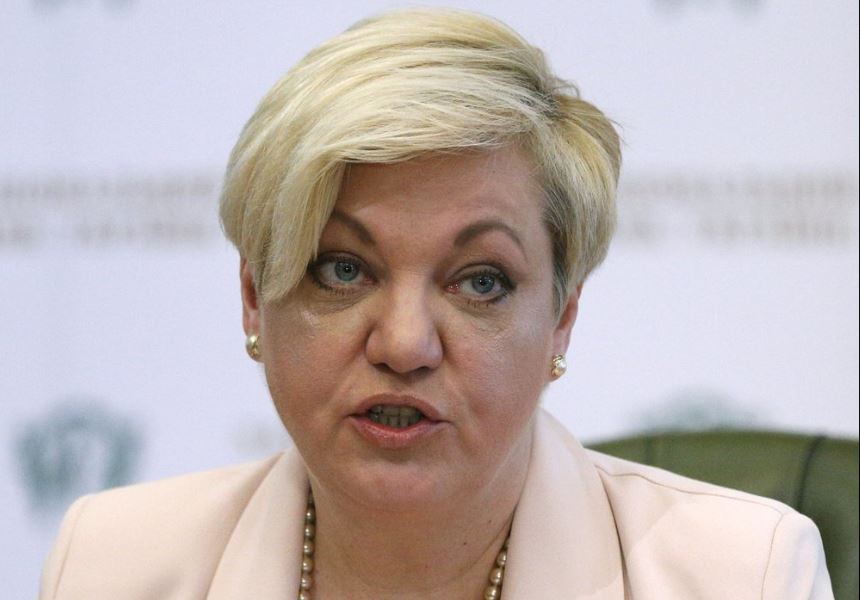 The chief of the Ukrainian Central Bank Valeria Gontareva makes a statement on her resignation during a press conference in Kyiv, Ukraine, April 10, 2017. Ukrainian officials on October 21, 2019, lashed out at a parody song targeting Ukraine's former central bank chief Gontareva, and mocking an arson attack on her home which was firebombed last month. (Photo: AP)

Ukrainian officials on Monday lashed out at a comedy show that targeted the former central bank chief by joking about a recent arson attack on her home.

Kvartal 95 is arguably the country’s most beloved comedy show and was led by Volodymyr Zelenskiy before he was elected president in April this year. On Sunday, it released a song recorded in collaboration with a famed choir and based on a popular folk tune that went: “A house was burning, up in flames, a woman was weeping in London.”

Valeria Gontareva’s house in Kyiv was firebombed last month in an attack that many said was retribution over her leadership in nationalizing PrivatBank in 2016 from its oligarch owner Ihor Kolomoyskyi. The bank was ailing financially amid a lack of liquidity and allegations of money laundering.

Gontareva, who is respected in the global investor community and is now a senior policy fellow at the Institute of Global Affairs, was hit by a car in August in London, where she now lives. Earlier that month, a car registered to her daughter-in-law was set on fire in Kyiv.

Former comedian Zelenskiy had business dealings with Kolomoyskyi’s media holdings during his acting career before he was elected. The arrival of Zelenskiy has stoked speculation that the decision to nationalize the bank could be reviewed.

Ukrainian Economy Minister Timofei Mylovanov was one of those who on Monday condemned the performance targeting Gontareva.

“Gontareva is under pressure from Kolomoisky because of the ruling on PrivatBank,” he said in a Facebook post. “Kvartal 95 is associated with the government, and jokes against Gontareva could be perceived as a confirmation that the government is linked to the oligarchs.”

Several lawmakers on Monday called for the choir to be banned from performing at state-sponsored events.

Zenoviy Korinets, director general of the Veryovka National Choir, told the Ukrainska Pravda website that it was his decision to allow the performance and said he regretted it.

“It was a wrong decision, and it was my decision, not the collective’s, because the collective did not really want to take part in that event,” he said. “I apologize to Valeria Gontareva.”

Kvartal 95 in a statement stood by its skit, saying that it “makes fun of the issues that society is concerned about.”

“Kvartal is about blistering political satire, that’s how it was and it always will be this way even if some politicians don’t like it,” it said. “Our humor is our main weapon, and as long as our weapon is sharpened, we will be doing our job with pride.”

Gontareva has been at loggerheads with Kolomoyskyi since she proposed to nationalize PrivatBank. The government ended up injecting 155.3 billion hryvnas ($6 billion) into the struggling lender following the move. Ukraine’s president at the time, Petro Poroshenko, fully supported PrivatBank’s nationalization, which was also hailed by international financial institutions including the International Monetary Fund.

Gontareva has said she has received threats from Kolomoyskyi, who previously publicly promised to send a plane to London to bring her home. The oligarch has denied involvement in the incidents and insisted that his comments in an interview about “helping” Gontareva back home were not a threat.

Ukrainian Prime Minister Oleksiy Honcharuk sought to calm the tensions, saying that Zelenskiy was deeply concerned about the arson attack on Gontareva’s house and is pushing for a thorough investigation into what happened.

“It’s wrong to link the president’s stance (on the arson attack) with comedy,” Honcharuk said at a televised briefing, adding that he does not approve of jokes “making fun of people’s misfortunes.”