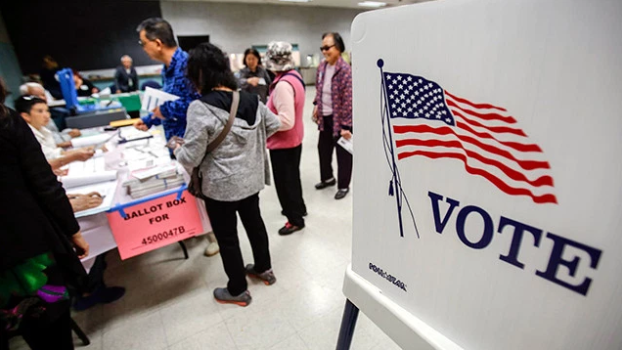 Voters at a polling station in Los Angeles for California’s primary election on June 5. (Photo: Xinhua/Zhao Hanrong via Getty Images)

DENVER, the United States, Oct. 25 (Xinhua) -- Outdoor retail giant Patagonia has stepped into the political arena by endorsing two candidates running for the US Senate.

"Hundreds of corporations back political candidates," Patagonia spokesperson Tessa Byars said. "The difference with our activism is that we put our logo on it."

With next month's pivotal mid-term elections just two weeks away, Patagonia's announcement stunned political observers with its support of candidates who are "running to protect public lands and waters."

Byars told Xinhua Wednesday that "it is the first time a 'company' has done this," when Patagonia announced last week it was openly backing Democratic US Senate candidates Jacky Rosen from Nevada and Montana's Jon Tester.

The unprecedented move "was not born from a desire to get into partisan politics," Byars said.

"In fact, it's the opposite -- it's about standing up for millions of Americans who want to see wild places protected for future generations ... something we will always do, regardless of political party," she added.

With its gross revenue reaching $209 million in 2017, Patagonia considers itself an "activist" company and has been donating 10 percent of its profits annually to environmental groups.

"The endorsement of specific candidates by Patagonia is the next logical step in the company's consistent efforts to advocate for the preservation of public lands, and to fund grassroots efforts that do the same," Outdoor Industry Association (OIA) Executive Director Amy Roberts told Xinhua Wednesday.

OIA has been endorsing political candidates for years, and its Nov. 6 election recommendations are bipartisan, including eight Republicans and 12 Democrats, all of whom share OIA's mission of protecting public land, promoting free trade for its members, and promoting America's outdoors to as many people as possible.

"That outdoor activity generates an enormous industry of gear and services which gathers twice a year," said an article in Forbes, referring to two gigantic large-scale outdoor retail trade shows held in Salt Lake City for the past 20 years, which provide an estimated $45 million of income to the state.

Political insiders told Xinhua that despite Patagonia's unprecedented move, corporate America has been involved in politics since the founding of the republic.

"To be fair, firms have been backing candidates for years, and that's what corporate campaign contributions are all about," said former Washington political wonk David Richardson.

"I think Patagonia has staked out turf and is environmentally concerned, so they come to it honestly," said Richardson, a Capitol Hill policy analyst during the Reagan administration. "I think it just reflects the particular politics of the directors of this firm."

"So they want to use whatever influence with their customers to tilt the political world in their direction, and they care enough about the issues to not worry so much about any sales hit they might face," he added.

"We are supporting Jon Tester because he gives a damn about protecting public lands -- and, like us, he's committed to fighting back against anyone who doesn't," Chouinard said in a published letter last week.

"Jacky (Rosen) has a strong record of defending public lands in Congress and protecting our access to clean air and clean waters," Chouinard said.

"We need her leadership to protect Nevada's economy and the basic health of its people, so the business community can thrive and so Nevadans can prosper," he said.