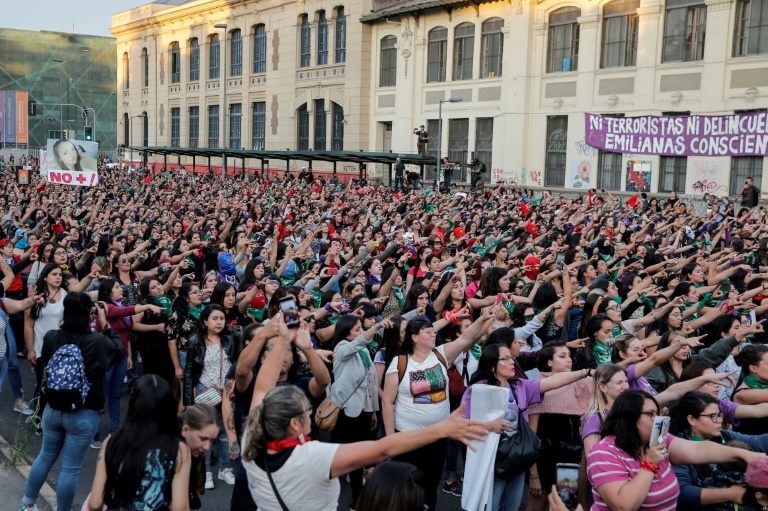 More than a thousand women have taken the feminist anthem "A Rapist In Your Way" into the streets of Chile's capital Santiago, performing the rallying cry sung in cities across the globe.

Those taking part often wear a black blindfold and a handkerchief tied around the neck.

"I am not the guilty one, not because of where I'm from or how I'm dressed," goes part of the chant.

"The rapist is you!" the women shout, flinging their arms forward to point in front of them.

Gathered in the city centre, some share their experiences of discrimination in a country where women are paid 15 percent less than men on average and pay up to two-thirds more for private health insurance.

"There's a lot of pain in these testimonies, there's a lot of wounds," says Sibila Sotomayor, one of the founders of Las Tesis, which was formed west of the capital in Valparaiso city.

"In some way that's what gives us this energy, but it hurts us too."

At least 3,500 women were killed -- victims of femicide -- in South America in 2018, according to the Economic Commission for Latin America and the Caribbean.

Chile has been rocked by two months of protests that began with strikes over metro fare hikes and quickly escalated into the most severe outbreak of social unrest since the end of the dictatorship of Augusto Pinochet nearly 30 years ago.