Over 1.5 billion globally asked to stay home to escape virus 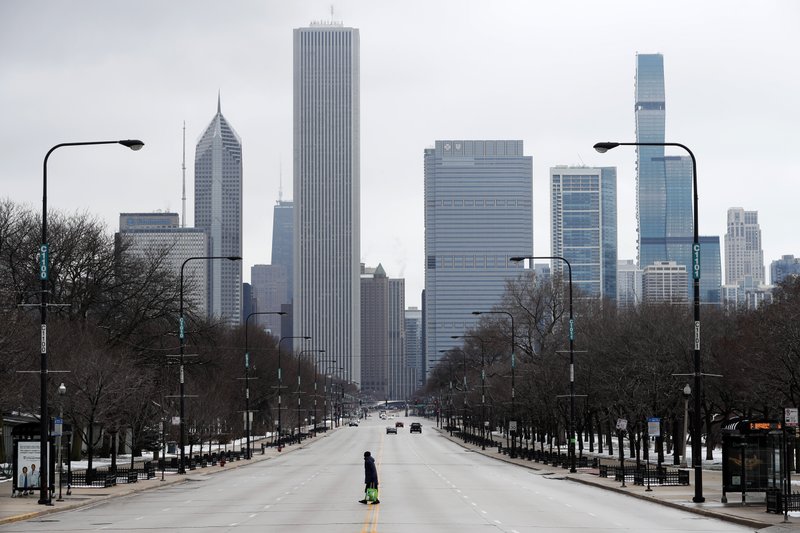 The hunt for masks, ventilators and other medical supplies consumed the US and Europe, as more than 1.5 billion people — one-fifth of the world’s population — were urged or ordered to stay home Monday to try to blunt the spread of the coronavirus.

Political paralysis stalled efforts for a quick aid package from Congress. Investor fears about the outbreak’s economic toll pushed U.S. stocks down in morning trading even after the Federal Reserve said it will buy as much government debt as necessary and lend to small and large businesses and local governments to help them cope.

At the start of what could prove a pivotal week in the U.S. and Europe, the head of the World Health Organization called on countries to take strong, coordinated action to stem the accelerating outbreak.

The scramble to marshal both public health and political resources intensified in New York, where a statewide lockdown took effect amid worries the city of 8.4 million is becoming one of the world’s biggest hotspots. Nearly 10,000 people have tested positive in the city, and almost 100 have died.

The governor announced plans to convert a huge New York City convention center into a hospital with 1,000 beds. Meanwhile, the mayor warned that the city’s hospitals are just 10 days away from shortages in basic supplies needed to protect health care workers and patients alike.

The risk to doctors, nurses and others on the front lines has become plain: Italy has seen at least 18 doctors with coronavirus die. Spain reported that more than 3,900 health care workers have become infected, accounting for roughly 12% of the country’s total cases.

“There’s a wild race to get surgical masks,” François Blanchecott, a biologist on the front lines of testing, told France Inter radio. “We’re asking mayors’ offices, industries, any enterprises that might have a store of masks.”

Health care workers say they are being asked to reuse and ration disposable masks and gloves. A shortage of ventilators, crucial for treating serious COVID-19 cases, has also become critical, as has a lack of test kits to comply with the World Health Organization’s exhortations to test as many people as possible.

The crisis continued to ease in China. The city of Wuhan, where the outbreak first emerged late last year, said it is allowing residents limited movement as its lockdown gradually eases.

In the United States, a fierce political battle over ventilators has emerged, especially after President Donald Trump told governors that they should find their own medical equipment if they think they can get it faster than the U.S. government. Alaska is expected to run out of money imminently to pay doctors, hospitals and clinics who treat Medicaid patients.

China has been the one nation to counter this trend, sending planeloads of protective gear as well as doctors to countries across Europe, including hard-hit Italy, France and Spain.

“The U.S. is completely wasting the precious time that China has won for the world,” said Geng Shuang, the Chinese Foreign Ministry spokesman.

Dr. Anthony Fauci, the U.S. government’s top infectious-disease expert, promised that medical supplies are about to start pouring in and will be “clearly directed to those hot spots that need it most.”

Meanwhile, efforts for a quick economic relief package from Congress faltered. The Senate voted against advancing the nearly $2 trillion plan that would prop up businesses and send checks to American households. Democrats argued it was tilted toward corporations rather than workers and health care providers. Another vote was expected Monday.

The delay shook investors, as has the accumulation of canceled events large and small, the soaring numbers of unemployed and a widespread pullback in spending.

Worldwide, more than 350,000 people have been infected and 15,000 have died from the virus. As cases in China ebbed, the dangers to Europe and the U.S. have grown exponentially, although Germany on Monday cautiously reported some flattening of its infection curve.

After just a few weeks, the U.S. has more than 35,000 cases and more than 400 deaths. From California to Illinois to New York, officials have now asked or ordered one-third of the U.S. population to stay home, with essential businesses closed.

U.N. Secretary-General Antonio Guterres called for an immediate cease-fire in conflicts around the world to tackle the pandemic.

“It is time to put armed conflict on lock down and focus together on the true fight of our lives,” he said.

Former Hollywood studio boss Harvey Weinstein tested positive at the prison in New York where he is serving a 23-year sentence for rape and sexual assault, the head of the guards union said. German Chancellor Angela Merkel tested negative after putting herself in quarantine, according to a spokesman. Minnesota Sen. Amy Klobuchar, the former presidential candidate, disclosed that her husband has been hospitalized with the virus.

For most people, the new coronavirus causes only mild or moderate symptoms, such as fever or coughing. But for some older adults and people with existing health problems, it can cause more severe illness, including pneumonia. Over 100,000 people have recovered, mostly in China.

Authorities kept up their push to get people to stay home, but some were clearly not listening.

“If people go within 2 meters of others who they don’t live with, then they’re helping to spread the virus,” he said. “And the consequences of that costs lives.”

Other countries, though, said the restrictions were working.

After 12 days of a national lockdown in Denmark, “we have together succeeded in changing our behavior very radically,” Prime Minister Metter Fredericksen said, in extending closings until mid-April.

Italy’s infections continued to spike, hitting 59,000 cases and 5,476 deaths, and India took the extraordinary step of shutting down the nation’s rail system, which has long been the lifeblood of the country of 1.3 billion people. The arrival of the global pandemic in Syria as well as the Gaza Strip has raised concerns it could run rampant in some of the most vulnerable areas in the Mideast.

With weddings and other large gatherings banned in many places, an untold number of burials are going forward with nothing more than a minister, a funeral home staffer and one loved one to bear witness.

Japanese Prime Minister Shinzo Abe acknowledged that postponing this year’s Summer Olympics could be unavoidable. Canada and Australia added to the pressure on Olympic organizers by suggesting they wouldn’t send athletes to Tokyo this summer. The International Olympic Committee said it would examine the situation over the next few weeks.

Trump suggested that the remedies to fight the epidemic — including worldwide financial pain — may be more harmful than the outbreak itself and vowed to reassess government restrictions after the 15-day mark of the US shutdown.

“WE CANNOT LET THE CURE BE WORSE THAN THE PROBLEM ITSELF,” he tweeted.