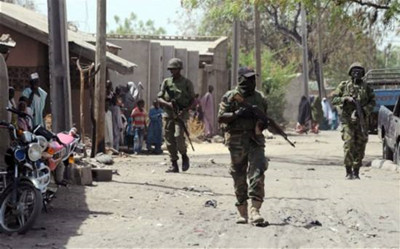 Over 107 Boko Haram fighters have been killed in an ongoing operation by the Nigerian military, an army spokesman confirmed on Tuesday.

The "Deep Punch 2" operation is aimed at routing the remnants of the terror group in Nigeria's northeast region, Sani Kukasheka Usman, the army spokesman, said in a statement.

According to him, more than 50 Boko Haram fighters were killed around the Lake Chad General Area, near the northern Borno State, where arms and ammunition of the group were also captured and destroyed on Monday.

On the same day, over 57 others were killed during the same operation in Metele area of Borno, he said.

He said four Nigerian soldiers and a member of the civilian volunteer group were killed by a vehicle operated by Boko Haram.

The vehicle, laden with improvised explosive devices, rammed into an MRAP (Mine-Resistant Ambush Protected) vehicle of the military, injuring nine of the troops, he added.

Nigeria has made a considerable gain on the Boko Haram front, with its security forces having dislodged Boko Haram fighters from the Sambisa Forest, their last enclave in the country.