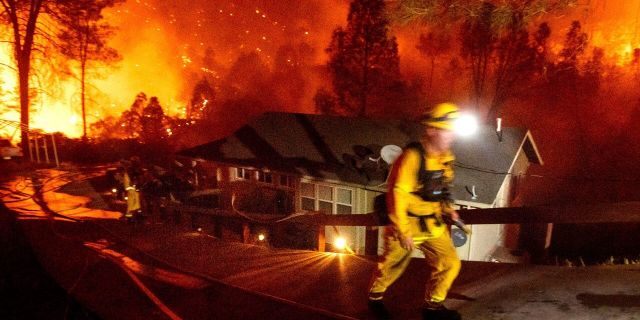 SAN FRANCISCO, Oct. 10 (Xinhua) -- More than 13,800 firefighters continued to work toward containment on 21 major wildfires across the U.S. state of California, according to the fire summary released by the California Department of Forestry and Fire Protection (Cal Fire) on Saturday.

Several of the fires are over 95 percent contained and no growth is expected, yet full containment likely would not be reached until rainfall occurs, Cal Fire said, adding that firefighters responded to 19 new wildfires the day before, quickly bringing full containment to all.

Since the beginning of the year, there have been over 8,400 wildfires that have burned well over 4 million acres in California. To date, the total number of fatalities statewide is 31, and more than 9,200 structures have been destroyed, according to Cal Fire.

The Glass Fire in Napa and Sonoma counties burned 67,484 acres (273 square km) as of Saturday morning, with 82 percent containment.

The Creek Fire in Fresno and Madera counties burned 333,880 acres (1,351 square km) as of Saturday morning, with 49 percent containment.

The 56,338-acre (228 square km) Zogg Fire in Shasta County was 95 percent contained as of Saturday morning, according to updates by Cal Fire.