The UN Children's Fund (UNICEF) said on Sunday that hundreds of children and families in the Democratic Republic of Congo's (DRC) Goma district are at risk following the volcanic eruption of Mount Nyiragongo. 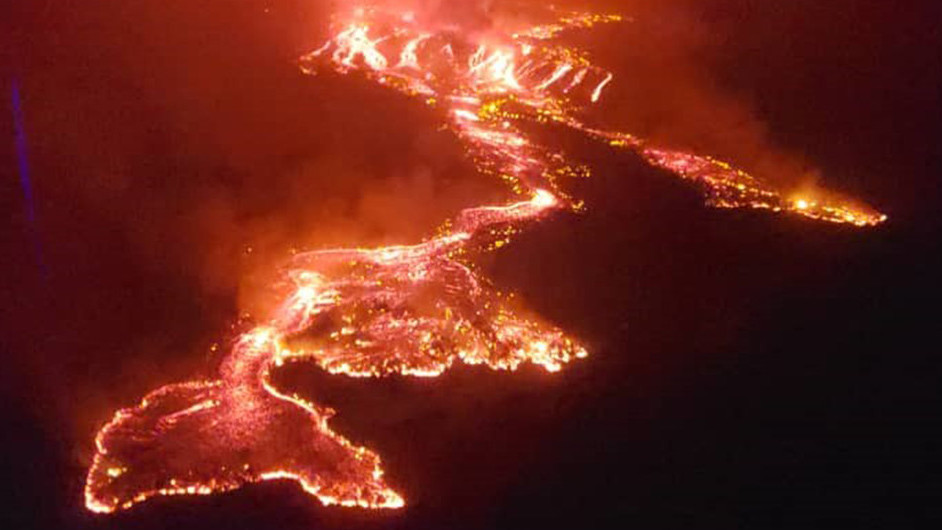 Lava from the Mount Nyiragongo volcano flows towards the city of Goma in the eastern Democratic Republic of the Congo. /AFP

The sky turned red and lava spewed from the volcano on Saturday, causing thousands to flee the city of two million, located just to the south. News reports indicate up to five may have died during the evacuation, and some houses have reportedly been lost in the north of Goma.

UNICEF said that more than 150 children have been separated from their families and more than 170 are feared to be missing.

More than 5,000 people crossed the border into Rwanda from Goma as the slow-moving lava spewed, and at least 25,000 were displaced in Sake, 25 kilometers northwest of Goma, said the agency.

"However, most people are slowly making their way back home since the lava has stopped flowing this morning", according to the press release, noting concern that hundreds are returning to find homes damaged, and water and electricity supply severely disrupted.

It is not yet clear how many households have been affected by the eruption, said UNICEF. Scores of children in the area near Goma's airport have been left homeless and destitute.

A UNICEF team has been deployed in the affected areas of Sake, Buhene, Kibati and Kibumba to provide first-line response, which includes installing chlorination water points in and around Sake to limit the spread of cholera.

The agency is strengthening surveillance for the deadly water-borne disease, especially in Goma itself, following residents' return.

Two transit centres are being established for unaccompanied and separated children, working closely with Congolese authorities.

UNICEF said it would work with partners to refer any cases of gender-based violence or abuse, to provide adequate medical and psychosocial support.

The UN peacekeeping mission in DRC, MONUSCO, tweeted earlier on Sunday that helicopters from the mission had made reconnaissance flights over the crater, including on Sunday morning, and it was "closely monitoring the situation.”

The last time Nyiragongo erupted in 2002, well over 100,000 were left homeless and around 250 people were reportedly killed. It is one of the world's most active volcanoes and the deadliest eruption from the lava lake, reportedly led to the death of more than 600, in 1977.

(With input from the UN News)