Over 180 Palestinians injured in clashes with Israeli soldiers in Gaza 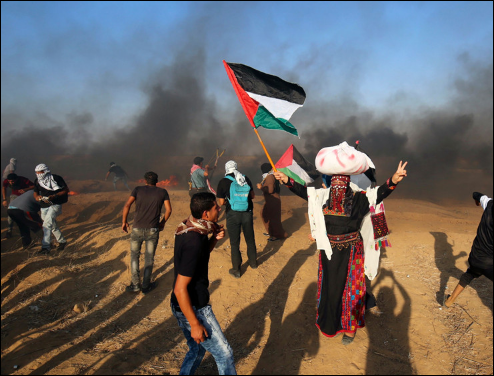 Palestinian protesters throw stones at Isreali forces as a man waves the national flag during a demonstration at the Israel-Gaza border, east of Khan Yunis in the southern Gaza Strip on August 24, 2018. ( Photo: AFP)

At least 180 Palestinians were injured Friday during clashes with Israeli soldiers in eastern Gaza Strip close to the border with Israel, medics said.

Gaza Health Ministry said in an emailed press statement that 189 Palestinians got injured; 116 were treated in the field by medical crews and paramedics in eastern Gaza Strip and 73 casualties were sent to hospitals all over the Gaza Strip.

Earlier on Friday afternoon, hundreds of Palestinians joined in the 22nd anti-Israel rallies, known as the "Great March of Return," close to the border with Israel.

The highest commission of the rallies called on the coastal enclave's populations to join the weekly rallies and protests, which began on March 30 and have been going on every Friday.

Hundreds of Palestinian demonstrators usually burn tires, wave flags, cut the barbed wire of the border fence and release arson kites and balloons into southern Israel in the protests.

Ashraf al-Qedra, Gaza's health ministry spokesman, said in an emailed press statement that since the beginning of the marches, the Israeli army killed 171 Palestinians and wounded more than 18,000, and most of them were injured with live gunshots.

The highest commission said in a statement that this Friday is called Friday of solidarity with paramedics and medical crews who have been in the field treating injured demonstrators.

Al-Qedra said three volunteering paramedics were shot dead in the past weeks of the rallies, including one woman, adding that the Israeli occupation doesn't respect the presence of paramedics and medical teams, and directly opened fire at them.

Hamas spokesman in Gaza Hazem Qassem said in an emailed press statement that the march will continue "until it achieves its goals," which is "mainly breaking the Israeli siege."

"The marches and protests confused the enemy (Israel) calculations and compelled it to make concessions," Qassem added.