WORLD Over 2,000 reporters flock to Singapore ahead of historic US-N.Korea summit

Over 2,000 reporters flock to Singapore ahead of historic US-N.Korea summit 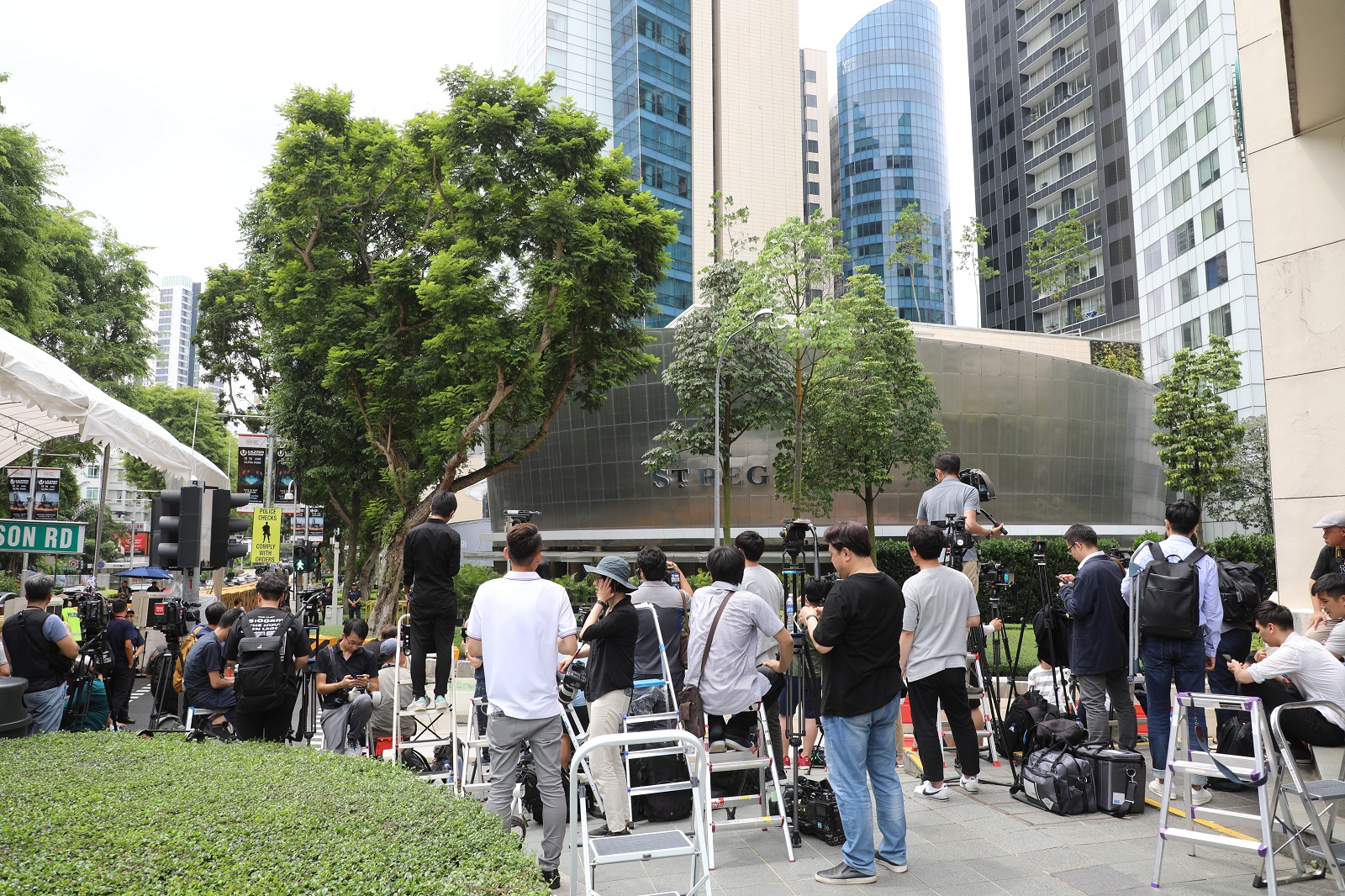 Singapore (People’s Daily) — Some 2,500 reporters arrived in Singapore ahead of the Sunday arrivals of US President Donald Trump and North Korean top leader Kim Jong-un, the largest contingent of foreign media the tiny island nation has ever hosted.

The government has set up an international media center in the pit building of the F1 race track. 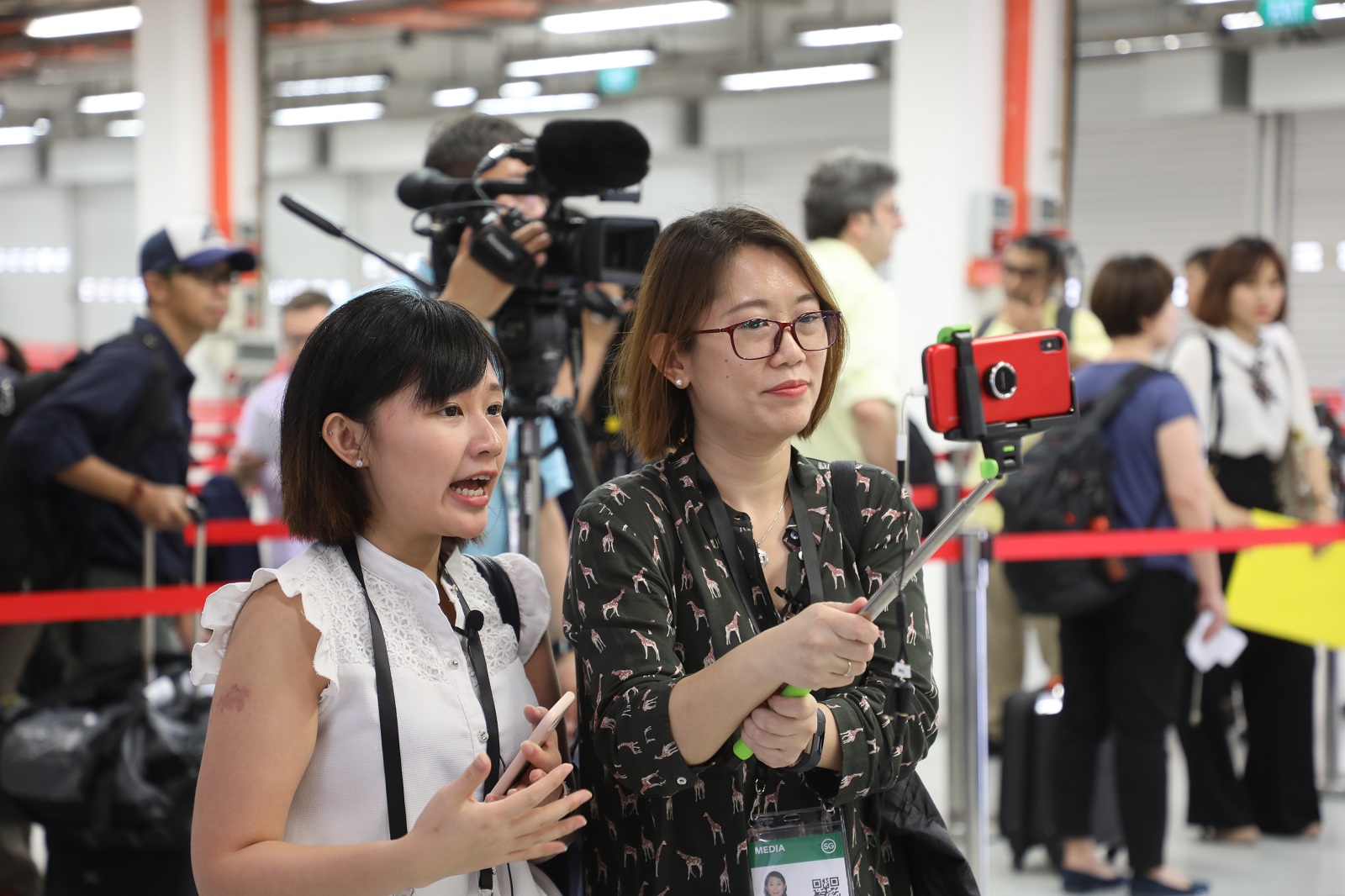 Two journalists at the media center

The media center operates 24 hours a day, and provides a variety of international cuisines in the dining halls and lounges. Reporters have gathered from China, Japan, South Korea, the United States, and Europe.

Four huge media work areas are well equipped to handle the needs of print, television and Internet reporters, in the opinion of an American reporter, who was originally assigned to cover Shangri-La Dialogue security conference that began June 1, and was told to remain for the summit. 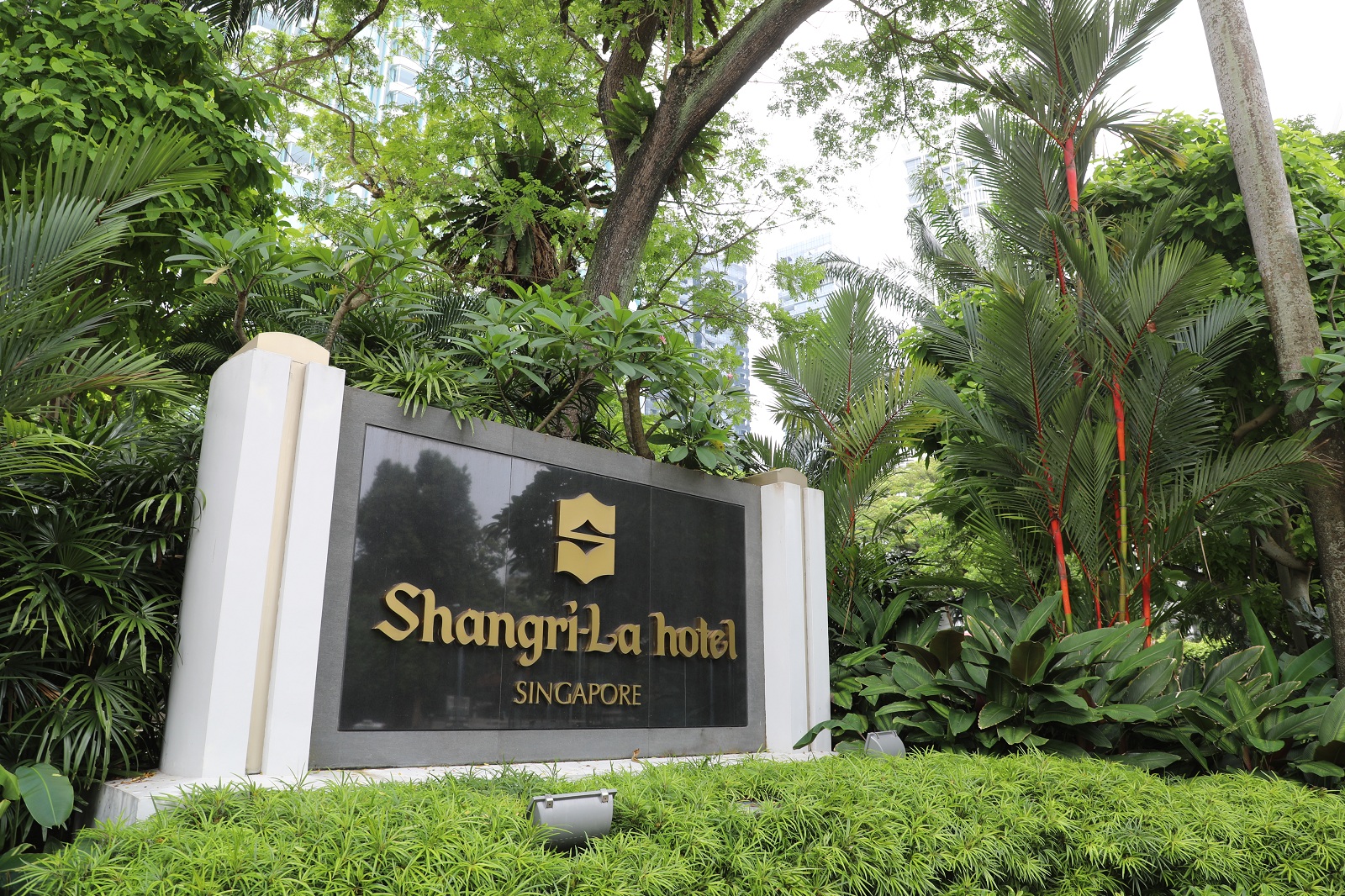 The Shangri-La Dialogue is an annual gathering of security officials, contractors and academics in the Asian city-state.

The American reporter noted security for the summit is very strict. "It is not easy to enter the media center. I have seen a long line of teams at the security screening and registration area. This security is even stricter than the Shangri-La summit."

The historic meeting between Kim Jong-un and Trump will be held at 9:00 am on June 12th. The venue is the Capella Hotel in Sentosa, Singapore.

The Capello Hotel, which is far from Singapore downtown and close to the sea, is currently listed as a “special event area” by the Singaporean government. 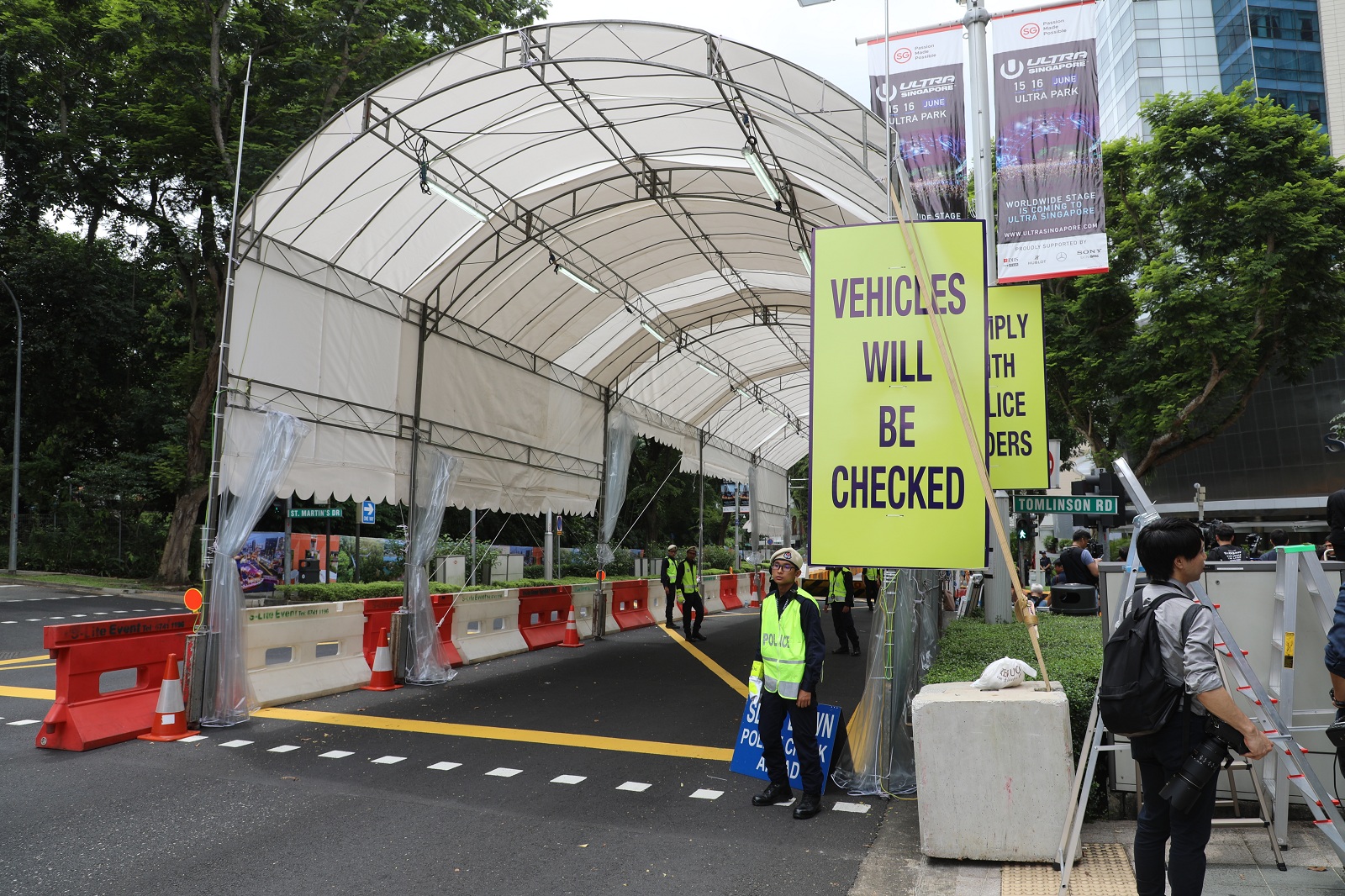 At the entrance to the “special event area,” several heavily armed policemen were closely monitoring and scanning each passing vehicle.

After this reporter on Sunday passed the security check, I went to the entrance of the Capella Hotel and discovered that the hotel was no longer open to the public or media.

One of the security guards said that the Capella Hotel currently only allows US and North Korean officials to enter and leave, and no one else can enter.

The Singaporean staff in charge of the media reception told us that the alert status of the Capella Hotel will continue until Thursday. Until then, no reporters are allowed to enter.

Also listed as “special event areas” are Kim and Trump’s respective hotels and their surrounding areas. 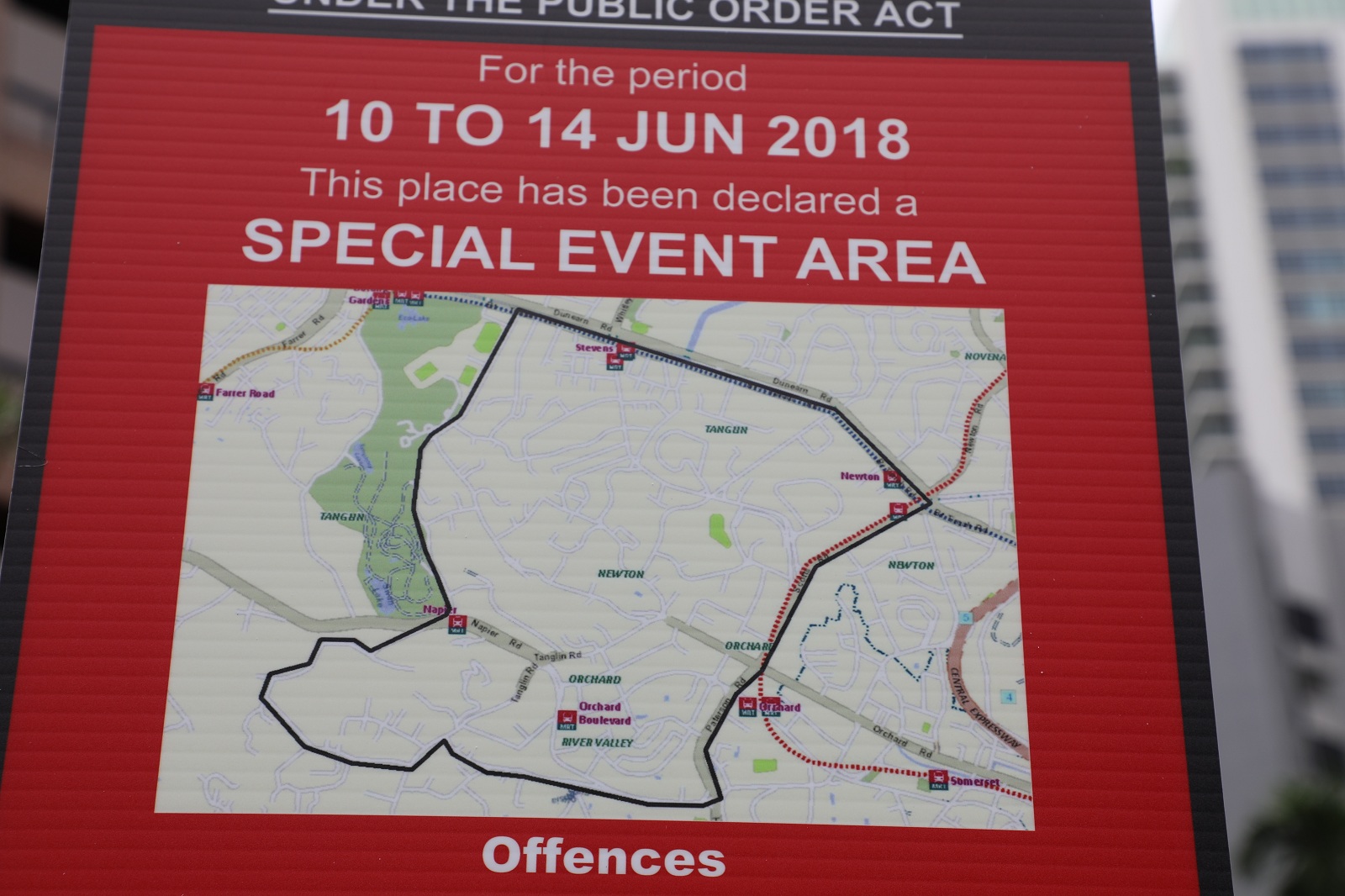 In the vicinity of Regis Hotel where Kim is staying, traffic control began on June 9.

The two right-most lanes in front of Dongling Road from Tudor Court to the Regis Hotel were closed. Early on June 9, workers started building a tent for vehicle security.

The American reporter told us that the Regis Hotel is still accepting other guests from outside North Korea, but the room rate is as high as S$900 ($670).

“Unless you are a North Korean official or a guest of Regis, it is very difficult for to get in," he said.Hundreds of reporters gathered near the Regis Hotel ahead of Kim’s arrival, but were kept at bay by security. The police and police cars are stationed outside the hotel.

Iron fences and giant concrete stone barriers have been erected around the hotel to prevent people from driving into the hotel.

Security at the Shangri-La Hotel where Trump is staying, 570 meters away, was relatively low-key during the day, as Trump was not scheduled to arrive until the evening.

"Trump came in the later evening, so there are not many reporters here. General travelers can still enter the hotel," one of the hotel's staff told us.

However, when we tried to enter the hotel in the afternoon, we were stopped by the security of the hotel entrance. As the time for Trump to arrive in Singapore was approaching, the security of Shangri-La became more stringent.