Local media broadcast a video showing the moment of the collapse that occurred at 7:45 p.m. local time on the down escalator at the Repubblica metro station, which accelerated suddenly and then collapsed, sending dozens of people tumbling and screaming. 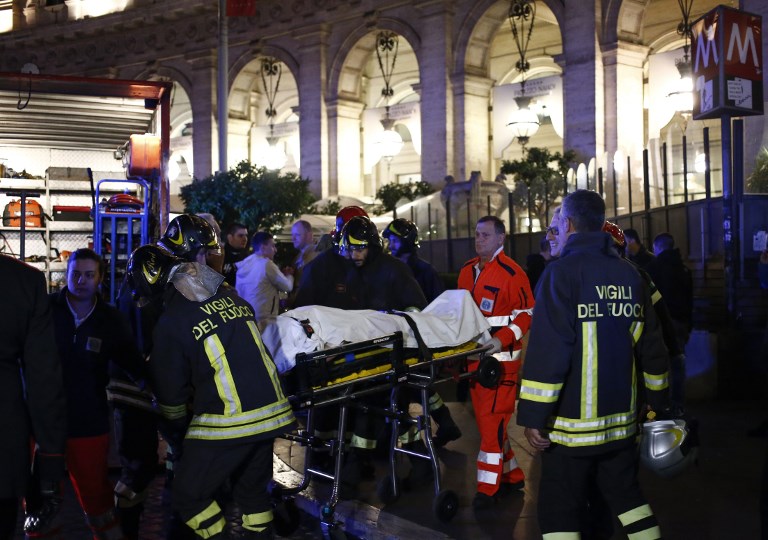 At least 17 Russians were hospitalized, including one whose foot had to be "semi-amputated", ANSA new agency reported, citing the Rome prefecture.

RAI public broadcaster showed ambulances and police gathered outside the station located in a busy central district, with injured people lying on the ground, seated on wheelchairs and being carried on stretchers, many with cuts and bandages on their legs.

On Twitter, users and media posted photos of the twisted metal of the escalator steps.

The CSKA Moscow football team fans were heading to a Champions League match against AS Roma scheduled to kick off at 9 p.m. local time at the capital city's Olimpico stadium.

The Rome prefecture has opened an investigation into the incident, according to ANSA.

Separately, one CSKA Moscow fan was stabbed and two suffered contusions in clashes with Roma supporters near the stadium, ANSA reported.

Top image: First responders evacuate a wounded person from Piazza della Repubblica in central Rome on October 23, 2018 after around 20 people were injured when an escalator leading to the Repubblica metro station collapsed in an accident believed to have been caused by Russian football fans. (Photo: AFP)