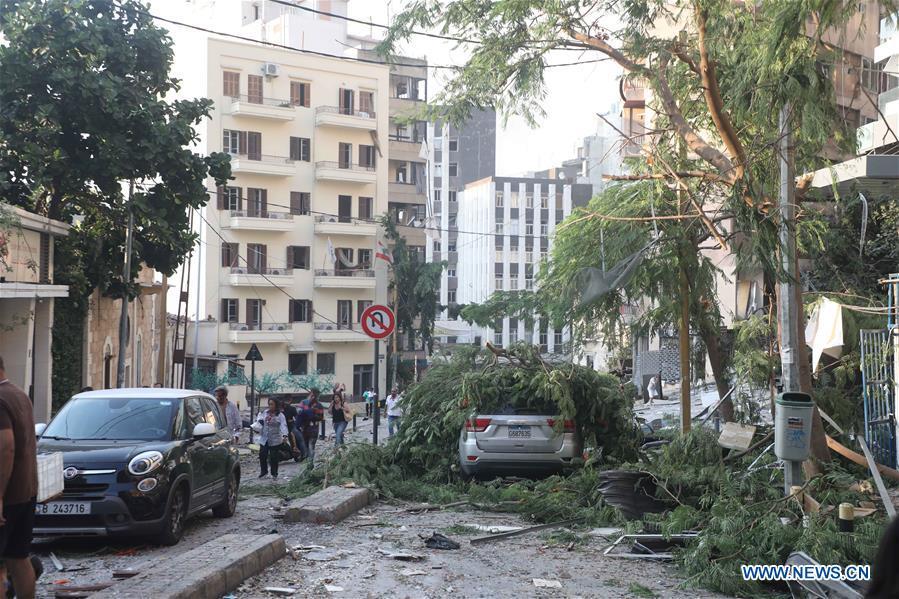 Photo taken on Aug. 4, 2020 shows a scene after the explosion in Beirut, Lebanon. Two huge explosions rocked Lebanese capital Beirut on Tuesday, leaving at least 50 people killed and 2,500 others injured. The number of casualties were expected to rise as the counting continued. (Photo: Xinhua)

The blasts rocked the Port of Beirut at around 6:10 p.m. local time (1610 GMT), shaking buildings all over the city while causing massive casualties and damages.

Lebanese Health Minister Hamad Hassan was quoted by al-Jadeed TV as saying that more than 50 people were killed and 2,500 others were injured in the blasts.

The number of casualties were expected to rise as the counting continued.

Meanwhile, Diab declared Wednesday a national mourning day for the victims of the explosions.

Lebanese President Michel Aoun called for an emergency meeting of the Higher Defense Council to discuss the reasons and repercussions of the explosions.

The causes of the blasts remained unknown, but Lebanese Interior Minister Mohammad Fahmi said that the explosive chemicals stored at Port of Beirut may have caused the explosions.

"Customs' authorities must be asked about the reasons behind storing such chemical materials at Port of Beirut," Fahmi said.

Many countries in the region expressed solidarity and sympathy with Lebanon over the explosions that have dealt a further blow to the country already plagued by the COVID-19 pandemic and an economic crisis.

"Our thoughts and prayers are with the great and resilient people of Lebanon," Zarif tweeted.

"As always, Iran is fully prepared to render assistance in any way necessary," he said.

Iran's Foreign Ministry spokesman Abbas Mousavi also expressed sympathy with the Lebanese government and nation over the incident, while announcing his country's readiness for providing help to the Arab country.

Iran is following the news on the incident with "deep grief" and "expresses solidarity with the Lebanese nation and government at this difficult time," said Mousavi in a statement.

Turkey on Tuesday expressed sorrow over the massive casualties and damages caused by the huge explosions in Lebanon.

Two Turkish citizens were slightly injured in the blasts, said the Turkish Foreign Ministry in a written statement.

"We wish God's mercy on those who lost their lives in this incident, urgent healing to those who were injured, and condolences to the Lebanese people, friends and brothers," said the statement.

Egyptian President Abdel-Fattah al-Sisi extended his condolences to Lebanon over the deadly explosions that rocked the Lebanese capital.

"My sincere condolences and sympathy go to the government and people of Lebanon, over the tragic explosions that happened today in the Lebanese capital Beirut," Sisi wrote on his official Facebook page.

Sisi also wished speedy recovery for those injured in the blasts, while extending condolences to the families of the killed.

Palestine on Tuesday expressed its solidarity with Lebanon following the massive explosions in Beirut.

Palestinian President Mahmoud Abbas said his country is ready to provide any support it could to Lebanon to help it recover from the tragedy, while sending his condolences to the families of the victims.

Palestinian Prime Minister Mohammed Ishtaye said in a press statement that Palestine is "ready to put all its capabilities" for the service of Lebanon and provide any needed assistance immediately.

Member of the Palestine Liberation Organization's Executive Committee Hanan Ashrawi also expressed sorrow over the "devastating tragedy," expressing the wish for Beirut to overcome the calamity.