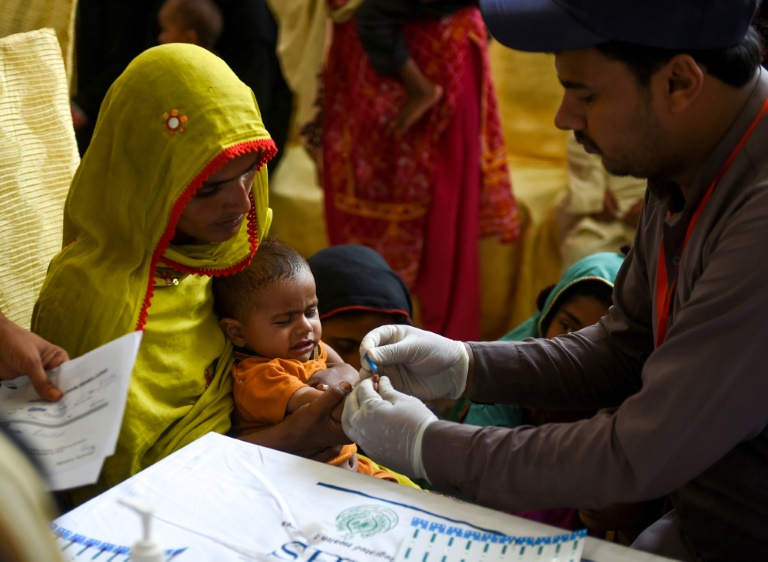 Pakistani paramedics have been taking blood samples for HIV testing in the city of Rato Dero (Photo: AFP)

Pakistan said on Sunday over 600 people, most of them children, had tested HIV positive in a city in the southern Sindh province.

Concern grew after hundreds of people were allegedly infected by a doctor using a contaminated syringe in Rato Dero city and surrounding villages of Larkana district.

"Some 681 people, of which 537 were children from two to 12 years of age, had been tested positive for HIV until yesterday in Rato Dero," special health advisor Zafar Mirza told a press conference in Islamabad.

He said 21,375 people had been screened in Rato Dero, adding that the increase in the number of patients testing positive for HIV was "a matter of grave concern" for the government.

One cause being investigated by Pakistani authorities is the use of "unsafe syringes" on patients.

Mirza said: "Initial investigations reveal that used syringes are being re-packed, which may not only grow significantly the number of HIV cases but also other diseases."

The federal government is providing 50,000 HIV screening kits to Sindh.

Provincial health officials have also noted that patients are at particular risk of contracting diseases or viruses at these clinics, where injections are often pushed as a primary treatment option.

"The government will get to the bottom of the outbreak and fully assist the provincial government to provide treatment to all patients," Mirza said, adding that a team of experts from the World Health Organization was also scheduled to arrive soon to assist Pakistani authorities in ascertaining the cause of the HIV virus in the area.

"Prime Minister Imran Khan is going to unveil drastic measures to prevent the disease once we ascertain the cause of the spread of disease," he said.

Parents in the area fear their children's futures have been irreparably harmed after contracting HIV, especially in a country whose masses of rural poor have little understanding of the disease or access to treatment.

Nisar Ahmed, the father of one of the affected baby girls aged just one, told AFP: "We are told to go to Larkana for medicine. I curse the doctor who has spread this disease to every child.

"Four of the children of my village have already been diagnosed HIV positive."

Pakistan was long considered a low prevalence country for HIV, but the disease is expanding at an alarming rate, particularly among intravenous drug users and sex workers.

With about 20,000 new HIV infections reported in 2017 alone, Pakistan currently has the second fastest growing HIV rates across Asia, according to the UN.

"According to some government reports, around 600,000 quack doctors are operating across the country and around 270,000 are practising in the province of Sindh," according to UNAIDS.