WORLD Over 67 pct of Okinawa residents set to vote against US base relocation plan: poll

Over 67 pct of Okinawa residents set to vote against US base relocation plan: poll

TOKYO, Feb. 17 (Xinhua) - A poll conducted by Kyodo News revealed on Sunday that more than 67 percent of Okinawa residents plan to vote against the Japanese central government's plan to transfer a key US air base within the southern island prefecture in a local referendum scheduled for Feb. 24. 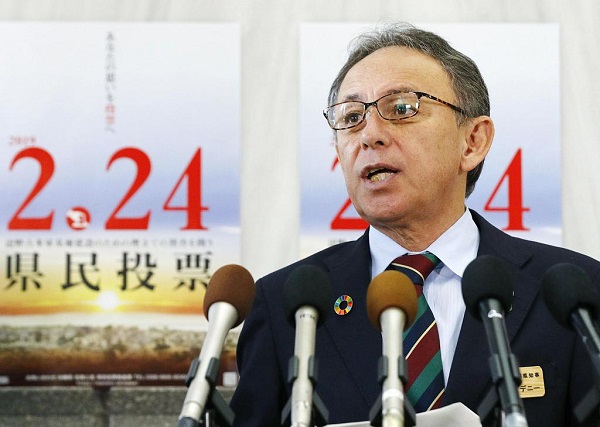 Okinawa Gov. Denny Tamaki speaks to the press at the prefectural government office in Naha on Feb. 14, 2019. Campaigning began the same day for the referendum scheduled for Feb. 24. (Photo: VCG)

Among the respondents against the base relocation within Okinawa, nearly 40 percent said they do not want a new US military facility on the island.

Okinawa Governor Denny Tamaki hopes the result of the referendum will show the local opposition to the transfer of the US Marine Corps Air Station Futenma in Okinawa, which hosts the bulk of US military facilities in Japan, although the vote is not legally binding, according to local media reports.

In total, about 1.16 million Okinawa residents with Japanese citizenship aged 18 or above will be eligible to vote.

In terms of their opinion about building a replacement facility in the coastal area of Henoko, voters will be given three simple options on the ballot -- "yes," "no" or "neither side."

About 13.1 percent responded that they are going to choose "neither."

Among the surveyed, 86.3 percent said the Japanese central government should respect the outcome of the referendum.

Cover image: This aerial view shows land reclamation work on the Henoko coastal district of Nago, Okinawa prefecture, on December 14, 2018, to build a new site for relocating a US military airbase. (Photo: VCG)