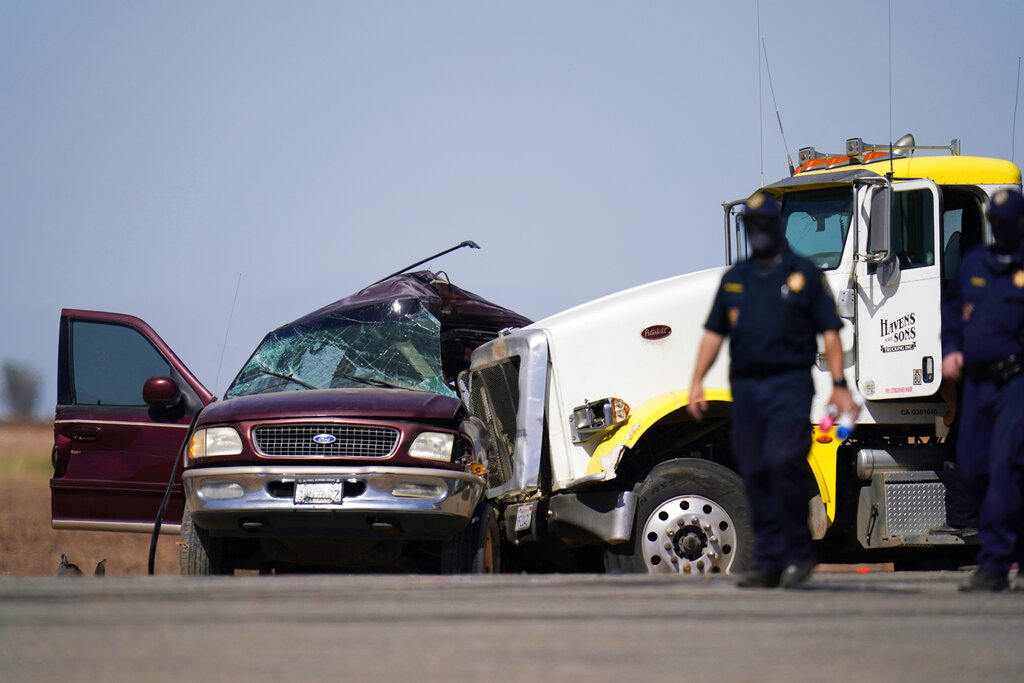 Law enforcement officers work at the scene of a deadly crash in Holtville, Calif., on Tuesday, March 2, 2021. (Photo: AP)

LOS ANGELES, March 2 (Xinhua) -- At least 13 people were killed in a traffic collision Tuesday morning near U.S.-Mexico border in U.S. Southern California, according to the local police.

California Highway Patrol Chief Omar Watson said at a press conference Tuesday noon that 12 people died at the scene just outside of Holtville, California, which is about 11 miles (17.7 kilometers) north of the U.S.-Mexico border, and another died after arriving at the hospital.

Hospital sources said earlier that at least 15 people were killed in the accident.

Judy Cruz, the El Centro Regional Medical Center's emergency department director, disclosed at a press conference that the accident left 15 dead and several others injured. Fourteen people died at the scene and another person died at the hospital, where six others are being treated, Cruz said, adding that at least five others were sent to other medical centers for treatment.

"The patients are, of course, going through a little bit of a difficult time, as you can imagine," said Dr. Adolf Edwards, the Chief Executive Officer of Central Regional Medical Center. "This was a major accident and we are taking care of them in the emergency room department."

The NBC Palm Spring news channel said the fatal accident occurred at about 6:16 a.m. local time in a place about 10 miles east of El Centro, the largest city in Imperial county, California.

A red Ford SUV running westbound traveled "in the direct path" of a big rig truck traveling northbound at an intersection in the rural area, both police and doctors confirmed, but they provided different information of the number of people in the SUV.

"Twenty-seven passengers were believed in the SUV" when the accident occurred, Cruz said. But Watson said the number was 25.

Macario Mora, a spokesman for Customs and Border Protection in Yuma and El Centro, said the immigration status of those in the SUV was unknown and being investigated.

"It was an unusual number of people in an SUV, but we don't know who they were," Mora said, adding that they could have been farm workers.

A harvest of winter lettuce and other leafy greens in Southern California is underway, according to local media.