WORLD Over one third of Indonesia's coral reefs in bad state: study

Over one third of Indonesia's coral reefs in bad state: study

More than a third of Indonesia's coral reefs are in bad condition, scientists said Tuesday, raising concerns about the future of the archipelago's vast marine ecosystem. 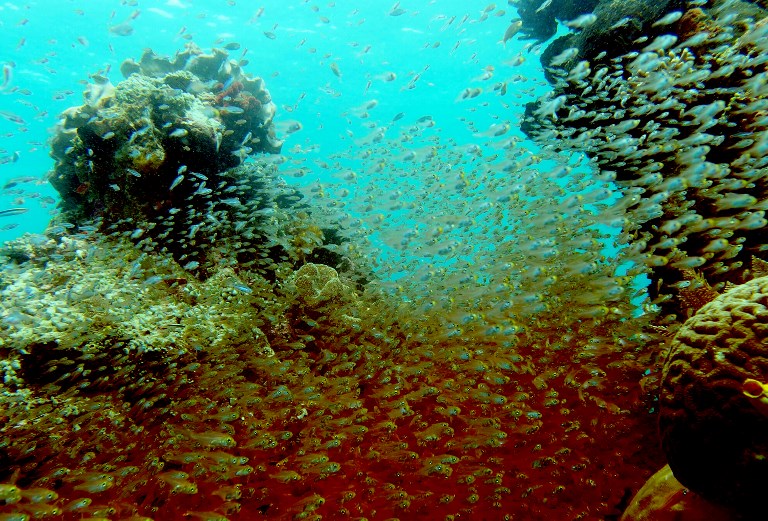 This photo taken on March 4, 2017 shows fish swimming amongst coral reef in Raja Ampat, a remote corner of Indonesia known as one of the world's most biodiverse marine habitats. (Photo: AFP)

The precarious state of the country's coral reefs was revealed after a survey of 1067 sites across the sprawling country of more than 17,000 islands.

Scientists from Indonesian Institute of Sciences (LIPI) found that just 6.5 percent Indonesia's coral reefs were in excellent condition, while 36 percent are in bad condition. Some 34 percent in sufficient condition with the rest classifed as being in good condition.

"Anthropogenic factors are having more influence on the condition of corals in Indonesia today," Dr Dirhamsyah, head of the institute's oceanographic research centre, said in a statement.

"The use of coast has increased which can threaten the ecosystem."

Dirhamsyah, who like many Indonesians has only one name, said greater public awareness was needed "for the survival of marine life" in Indonesia.

Indonesia has one of the most extensive coral reef systems in the world and more people live close to reefs than anywhere else on the planet, according to the Coral Reef Alliance.

But the giant living organisms face a number of threats, including man-made climate change, destructive fishing techniques and nutrient and sediment loading.

Conservation group WWF warned last month up to half of the globe's shallow-water reefs, which support a quarter of all marine life, have already been wiped out.

If humanity fails to keep global warming at 1.5 degrees Celsius (2.7 degrees Fahrenheit) above pre-industrial levels, coral mortality is likely to hit 70-90 percent by the middle of the century, the United Nations warned in a recent report.