WORLD Over one-third of Italians under curfew amid coronavirus spike

Over one-third of Italians under curfew amid coronavirus spike 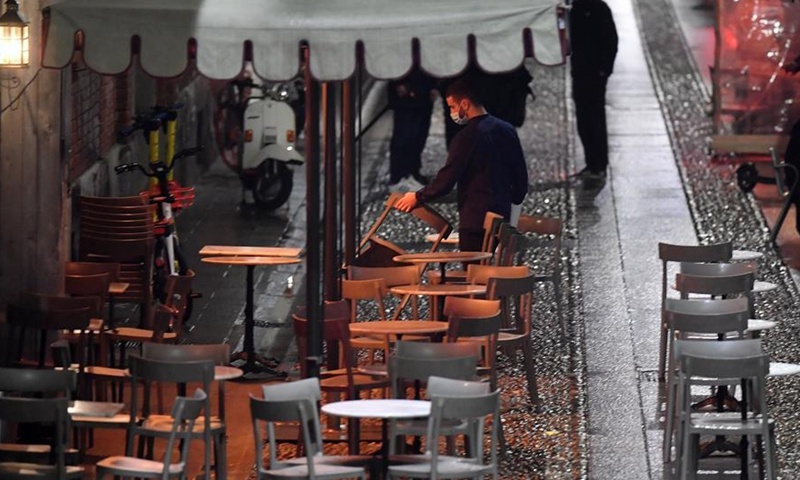 A restaurant is closed before curfew hours amid a spike in new coronavirus infections in Milan, Italy, Oct. 22, 2020. (Photo:Xinhua)

Over 21.7 million Italians, making up over one-third of the country's population, have been placed under curfew amid a spike in new coronavirus infections, which numbered 13,860 on Thursday, officials said.

The Ministry of Health said that 136 patients had died in the past 24 hours, pushing the total to 36,968 fatalities since the pandemic began in this country in February.

Another 2,082 patients have recovered, bringing the total recoveries from COVID-19 to 259,456, the ministry said.

The latest figures bring the combined number of infections, recoveries, and fatalities in Italy to 465,726.

The northern Lombardy region, whose capital is Milan, has had the lion's share of cases with over 33,000 currently infected people. It is followed by the southern Campania region with more than 22,000 infections and the central Lazio region with over 18,000 infections.

These same three regions, which together comprise over 21.7 million of Italy's approximately 60 million citizens, have imposed night-time curfews -- meaning that people cannot leave their home unless for provable emergencies, work or health-related reasons -- in a bid to contain the spread of the virus.

In the Lazio region, whose capital is Rome, a 12 midnight to 5 a.m. 30-day curfew will go into effect on Friday. The region also decided to increase its COVID-19 hospital beds (including ICU beds) by 1,421 units, while 50 percent of high school students and 75 percent of university students will have to be taught remotely, starting Oct. 30 for a month.

In the Campania region, whose capital is Naples, the authorities prohibited residents from traveling between provinces starting Oct. 23, and have set up a red zone around the town of Arzano, with no one allowed in or out and all businesses locked down from Oct. 20 to Oct. 30.

Also on Thursday, Prime Minister Giuseppe Conte told the Lower House of Parliament that in light of "the sudden deterioration of the situation," the government is now focused "exclusively on measures to limit social and recreational behaviors, which ... are currently the vehicle of the greatest diffusion of the virus."

"We are still within the pandemic and the constant increase of infections obligates us to remain on extremely high alert ... we must be ready to intervene again if necessary," Conte told lawmakers in reference to the latest anti-COVID decree passed by his cabinet on Sunday.

"In light of a resurgence of the virus, which has been ongoing for several weeks," the Italian prime minister urged the public to "make an effort to reduce the chances of infection, to avoid unnecessary trips and superfluous activities that could generate risk."

"If we are willing to make these small sacrifices today, we will avoid stricter and more penalizing measures tomorrow," Conte said, adding that the regional governments must be "ready to intervene" with more restrictions if local outbreaks get more serious.

The prime minister said that in its latest budget bill, the government has included "a four-billion-euro (4.73 billion U.S. dollars) fund for the hardest-hit sectors" such as tourism, culture, entertainment and catering.

"The backlash from the (pandemic-related) crisis is still strong, and it is not possible at this time to discontinue the safety net for workers and businesses," he said.

As the world is struggling to contain the COVID-19 pandemic, countries including Germany, France, Italy, China, Russia, Britain and the United States are racing to find a vaccine.