Norm Bloom enjoys watching his 5-year-old grandson, Jack, out on one of their oyster boats dressed in his little waders, helping the crew as they pull in dredge cages full of the shellfish from the bottom of Norwalk Harbor. 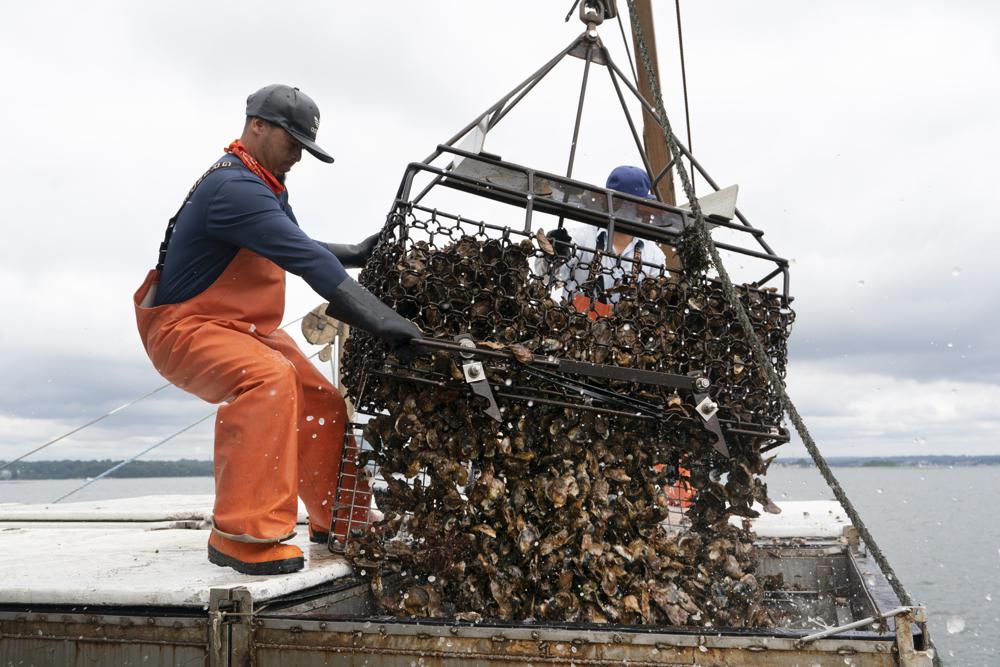 Darwin Ceveda opens the bottom of a basket to unload hundreds of oysters into the hold of a shellfishing boat owned by Copps Island Oysters, Monday, Aug. 9, 2021, off Norwalk, Conn. (Photo: AP)

“He’d be out there on deck all day every day if he could,” Bloom said, during a recent harvesting trip with his son, Jimmy. “Or maybe it will be Jack’s little sister Grace; she loves to get dirty. She might end up being the next oysterman in the family.”

Whatever the case, Norm and Jimmy Bloom are confident that Copps Island Oysters, the family’s 12,000 acre (4,856 hectare) oyster farming business that has been in Norwalk since the 1940s, will have a next generation.

That wasn’t always clear. Connecticut’s oyster industry is once again thriving, about 25 years after it almost disappeared, decimated by MSX, a parasitic disease that attacks oysters. Government and private efforts to clean up Long Island Sound, develop disease-resistant shellfish and find new markets have helped aquaculture become a $30 million a year business in Connecticut, with oysters accounting for about half of that, state agriculture officials said.

“We’re the Napa Valley of oysters,” Gov. Ned Lamont said last month, while signing a bill that will give tax breaks to the industry, treating oystermen much like farmers on land.

There are aquaculture farms up and down the Connecticut shoreline, where ideal habitats exist, especially at the mouths of rivers where the fresh water spills into Long Island Sound.

They are all helped by the state of Connecticut, which maintains more than 17,500 acres (7,081 hectares) of natural shellfish beds. Oystermen get permits to work those public beds, harvesting seed oysters to transplant to their own grounds. It’s a system that helps keeps the industry going, even in bad years, agriculture officials said.

And there have been bad years, when parasites have killed oysters. Large storms like Sandy and Irene have overwhelmed sewage systems, polluting the harbors while churning up shellfish beds and burying them under silt, where the oysters suffocate and die.

Over the past three decades, the state has been working with municipalities, industry experts, local harbor management and shellfish commissions and environmental groups such as Harbor Watch to monitor and improve the water quality of the Sound, the rivers that flow into it and their estuaries.

Dick Harris, who founded Harbor Watch, monitors the water quality in seven harbors for Bloom’s company. He said frequent testing and subsequent investigations have led to the closure of numerous illegal connections to storm drains, where companies had been dumping raw sewage into the water.

That has meant cleaner water and far fewer days that oystermen have had to suspend operations because of high bacteria counts.

“When I first started this thing, Norwalk Harbor was a disaster,” Harris said. “Low oxygen levels, multiple fish kills every year because of the lack of oxygen, extremely high bacteria counts. Today’ we’re in a position where the counts in the outer reaches of the harbor on a normal day are zero.”

But the industry continues to face threats, from old sewage infrastructure to climate change.

Tessa Getchis, an aquaculture specialist with Connecticut Sea Grant, a University of Connecticut-based program that supports the aquaculture in Long Island Sound, said the biggest concern she hears from oystermen is the increase in frequency of extreme storms and the associated closing of shellfish harvest areas because of runoff and contamination.

“Even a moderate storm can wreak havoc on businesses,” she said. “Not only can there be extended harvest area closures, but in many cases, boats and equipment may need to be temporarily relocated to avoid impacts.”

But modern farming techniques are helping with that, she said. The Blooms, for example, are building an oyster hatchery in New Haven, which will help make sure their farm always has a steady supply of seed shellfish.

Last year, when restaurants closed due to the coronavirus pandemic , the oyster market dried up. But some companies were able to adapt. At Indian River Shellfish, a small oyster company on the Madison-Clinton line, owners Mike Gilman and George Harris opened a fish stand so they could sell directly to customers, helping to make up lost revenue.

UConn’s Sea Grant also helped keep oystermen afloat by hiring them to rehabilitate the state’s natural beds. They would find oyster shells that had been buried in silt and mud and relocate them to areas where oyster larvae could attach to them and begin growing.

More than 1,800 acres of those beds were rehabilitated in 2020, officials said.

Gilman is pushing the state to do more to help small operations such as his. This year’s aquaculture legislation included funding for a shellfish council and money for marketing.

“I’d like to the state establish an oyster trail, like the wine trail they already have,” Gilman said. “That way people can go up and down the coast from place to place, sampling all the different oysters we have. Then we’d really be the Napa Valley of oysters.”