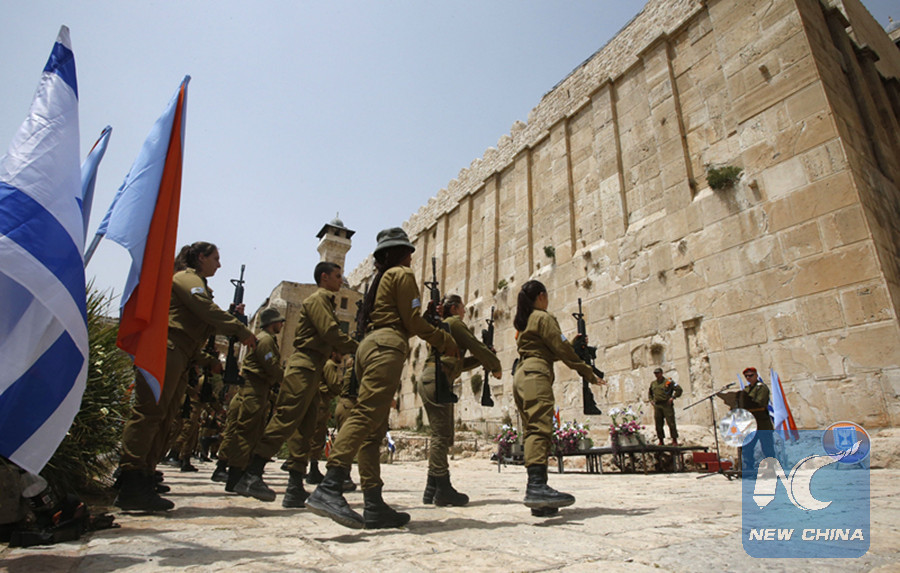 Israeli soldiers stand outside the Tomb of the Patriarchs, also known as the Ibrahimi Mosque, in the divided Palestinian city of Hebron in the Israeli occupied West Bank. (File photo: AFP)

RAMALLAH, Aug. 8 (Xinhua) -- The Palestinian Authority slammed on Wednesday the Israeli decision to close down access into Ibrahimi Mosque in the south West Bank city of Hebron for 24 hours on the occasion of Jewish holidays.

Palestinian Minister of Wakfs and Islamic Affairs Yousef Ide'is said in a press statement that the Israeli decision "set the conflict to a religious one and pushes the entire region to a religious war that could unfold misery and disasters."

Ide'is called on the UN Educational, Scientific and Cultural Organization (UNESCO) to uphold its responsibilities towards the protection of the Palestinian people's heritage and diverse culture.

He added that the Israeli violations against the Ibrahimi Mosque in Hebron and Al-Aqsa Mosque in Jerusalem have increased in frequency and danger.

The administrator of Ibrahimi Mosque said that the Israeli authorities have informed them that it will ban Muslim worshippers from entering the mosque from 10 p.m. local time for the Jewish holidays.

Palestinian President Mahmoud Abbas' Fatah party said the move is "a crime against the holy sites and the Palestinian people and violates all international treaties."

Fatah party's spokesperson Osama Qawasmi called on Palestinians to head to the mosque and hold their prayers at its doors in rejection to the decision, and to declare that it is a purely Islamic site and the Jews have no right in it.

The 1,000-years-old Ibrahimi Mosque, considered by Muslims as the fourth holiest site, enshrines the tombs of Prophet Abraham, his son Isaac, his grandson Jacob and their wives. It is also believed that Prophet Mohammad of Islam visited it on his night flight from Mecca to Jerusalem.

The Israelis believe the site is a shared faith site, but has for a long time imposed restrictions on the access of Palestinians into the mosque, deploying soldiers, gates and a checkpoint system surrounding the site.

Following the signing of the Oslo Accords between Palestine Liberation Organization (PLO) and Israel in 1993, a subsequent agreement about Hebron was signed in 1997 splitting it into two sections, H1 under Palestinian control and H2 under Israeli control.

This has led to a sharp decline in the Palestinian population of the old city, due to constraints and harassment by Jewish settlers and military measures against Palestinians, gradually killing the economy and tourism in a once vibrant commercial city.

In July 2018, the UNESCO declared the old city of Hebron as an endangered site with an overwhelming vote, stating it as a Palestinian site that requires protection.