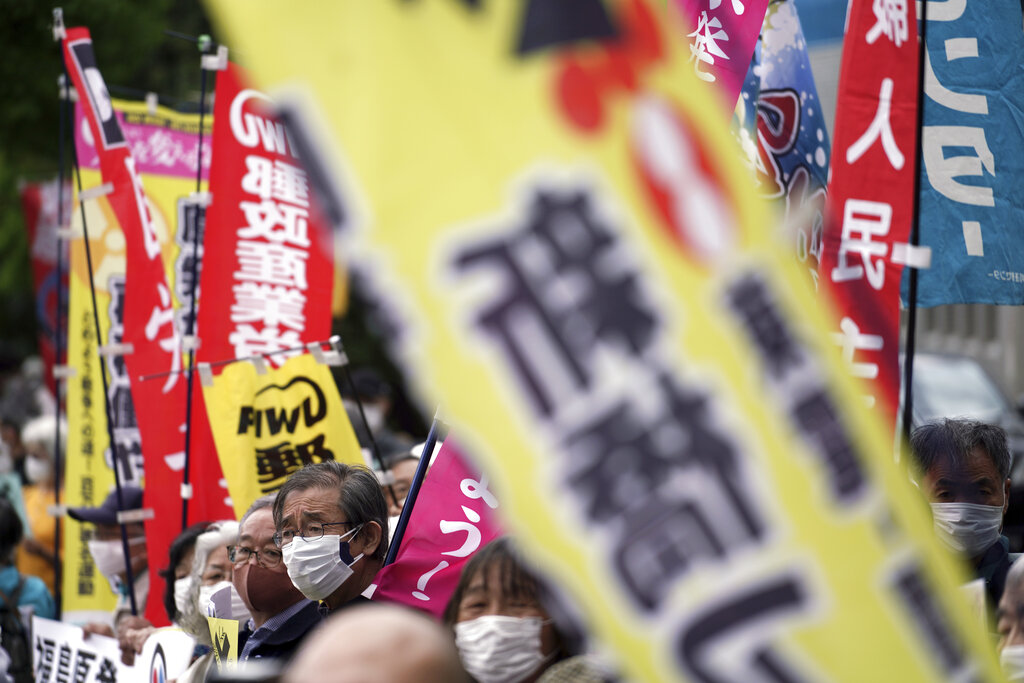 People chant slogans against government's decision to start releasing massive amounts of treated radioactive water from the wrecked Fukushima nuclear plant into the sea, during a rally outside the prime minister's office in Tokyo Tuesday, April 13, 2021. The decision, long speculated but delayed for years due to safety concerns and protests, came at a meeting of Cabinet ministers who endorsed the ocean release as the best option. (Photo: AP)

SUVA, April 14 (Xinhua) -- The Pacific Islands Forum (PIF) has expressed deep concern about Japan's decision to dump nuclear wastewater from the Fukushima nuclear plant into the sea and urged Japan to rethink about such a decision.

According to a statement by the PIF on Wednesday, PIF Secretary General Dame Meg Taylor said that the PIF noted, with deep concern, the decision by the Japanese government to discharge the Advanced Liquid Processing System (ALPS) Treated Water from the Fukushima Daiichi Nuclear Power Station into the Pacific Ocean, and wished to highlight and reiterate the position of the Pacific Islands Forum region in relation to this matter.

As required under the international law, and as highlighted by the States Parties of the Treaty of Rarotonga, also known as the South Pacific Nuclear Free Zone (SPNFZ) Treaty, in December 2020, Japan should take all appropriate measures within its territory, jurisdiction or control to prevent significant transboundary harm to the territories of the Pacific, including the South Pacific Nuclear Free Zone, Taylor said.

She said that the PIF's view is that Japan has not taken sufficient steps to address the potential harm to the Pacific, including possible environmental, health and economic impacts.

While stressing that the Pacific's fisheries and oceans resources are critical to the Pacific livelihoods and must be protected, the PIF urgently called on the Japanese government to hold off the conduct of the discharge of the ALPS Treated Water until further consultations are undertaken with PIF members and an independent expert review is undertaken to the satisfaction of all PIF members.

Founded in 1971, the PIF is an inter-governmental organization that aims to enhance cooperation between countries and territories of the Pacific Ocean, including formation of a trade bloc and regional peacekeeping operations.

The Treaty of Rarotonga, which was inked by PIF members in 1985, bans the manufacture, possession, stationing, and testing of any nuclear explosive device in Treaty territories for which the parties are internationally responsible. It also bans the dumping of radioactive waste at sea.