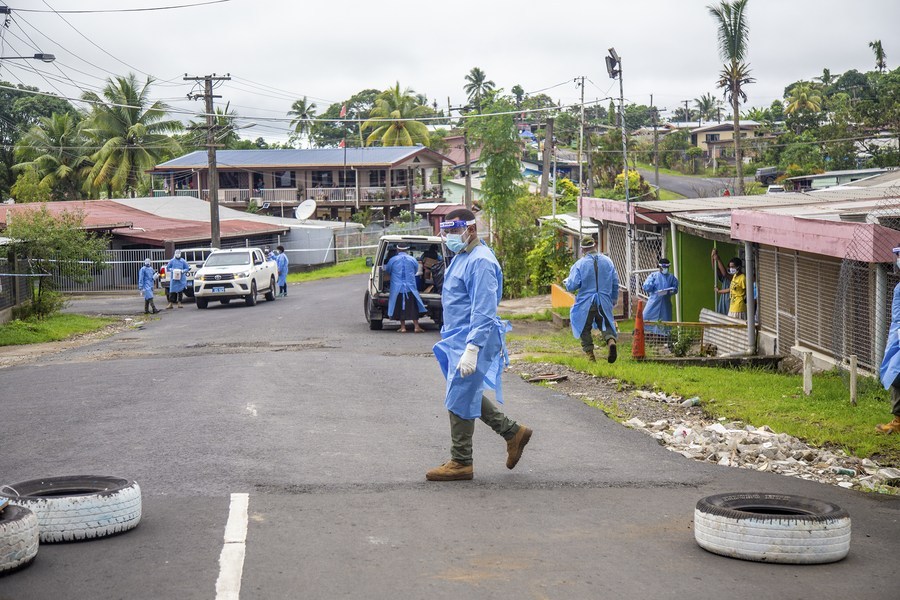 Health workers conduct investigation to trace chains of infection to curb the spread of COVID-19 in Suva, Fiji, May 26, 2021. (Photo: Xinhua)

For much of the time since the COVID-19 pandemic broke out, the island nations of the Pacific were considered among the luckier places in the world as they managed to keep infection rates low. All of that has changed.

In several countries in the region, there has been a spike in coronavirus infections in the past few months, upending people's lives and straining the local health systems.

Border closures have isolated communities, hindered food supplies and crippled businesses and economies across the Pacific, a region almost entirely dependent on exports and tourism.

Since April, there has been a dramatic rise in the number of COVID-19 infections in Fiji, with its case tally reaching 3,591 as of Monday, and a record 308 cases were reported on Friday, data from the World Health Organization showed. Before June, Fiji's highest daily infections were fewer than 50 cases.

In Papua New Guinea, there have been more than 17,000 cases recorded but the real figure is thought to be much higher. This year has also seen a major spike in the number of cases in French Polynesia, with 18,994 cases as of Monday and 142 deaths.

Raina MacIntyre, principal research fellow and professor of global biosecurity at the University of New South Wales in Sydney, said the early easing of pandemic restrictions contributed to the surge in the Pacific.

"We do not have a good handle on what variants of concern are circulating (in the Pacific) and in what proportion," MacIntyre said. "More transmissible or vaccine-resistant variants may also account for the problems."

Vaccine supplies, logistic issues and misinformation over the jabs have added to the problems facing Pacific Island nations, the professor said.

The supply was initially only a small amount from World Health Organization's COVAX facility. Problems facing the vaccination program in the Pacific include vaccine hesitancy.

Henry Ivarature, a professor at the Australian National University, said the Pacific countries with the highest rates of COVID-19 infections are colonies unable to exercise sovereign control over their borders.

The list includes French Polynesia, which went from 62 infections to more than 20,000 after its borders were opened to tourists last August, and the US territory of Guam, where the arrival of a US navy aircraft carrier seeded the virus on the island.

China delivered 50,000 doses of the Sinopharm vaccine on May 21 to the Solomon Islands. The vaccine is now being used alongside AstraZeneca jabs to vaccinate frontline workers and "special groups", including students who plan to travel to China.

China has also pledged to provide 200,000 doses of the Sinopharm vaccine to Papua New Guinea. It was approved for emergency use by the World Health Organization in May, the first COVID-19 vaccine developed by a non-Western nation to receive this backing.