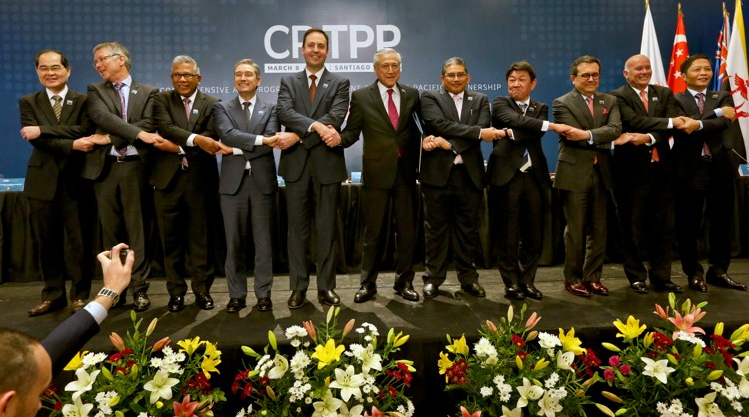 The Pacific rim trade pact abandoned by President Donald Trump will take effect at the year's end after Australia became the sixth nation to ratify it.

Australia announced Wednesday that it had completed procedures needed for the trade arrangement, the Comprehensive and Progressive Trans-Pacific Partnership, to progress. It will take effect Dec. 30.

The deal is aimed at streamlining trade and slashing tariffs to facilitate more business activities between member nations with a combined population of nearly 500 million people and GDP of $13.5 trillion.

"Our ratification means we are guaranteeing maximum benefits for our farmers and businesses," Simon Birmingham, minister for Trade, Tourism and Development, said in a statement. He said the deal would bring annual benefits of up to $15.6 billion to the Australian economy by 2030.

The 11 nations remaining after the U.S. withdrawal in early 2017 amended the pact to enable it to take effect even without its participation. Japan, Canada, Mexico and Singapore also have ratified it.

The U.S. departure was a huge loss given the size of the American market. However other countries are said to be interested in joining the trade deal, which is seen as a first step toward a pan-Pacific free trade zone.

Trump said he was putting "America first" in seeking bilateral deals rather than broader ones like the Trans-Pacific Partnership. But U.S. Treasury Secretary Steven Mnuchin said earlier this year that the U.S. would consider rejoining the pact after it deals with other priorities.

Other TPP member countries have said they hope the U.S. will rejoin, while emphasizing their commitment to the global trading system that has enabled many of them to build thriving modern economies.

Nearly two-dozen stipulations sought by the U.S. in the original TPP deal reportedly were shelved after Washington withdrew, watering down somewhat the plan proclaimed by the Obama administration of being the "gold standard" for 21st century trade rules.

Birmingham, the Australian trade minister, said the deal would help farmers gain better access to Canada's market for grains, sugar and beef, and to Mexico's market for pork, wheat, sugar and other farm products.

It will also help iron and steel, leather, paper products and medical equipment manufacturers who export $19 billion annually to other markets within the trade pact, he said.

For New Zealand, the trade arrangement will bring duty-free access for its exporters of wine, meats, wool, timber and fisheries products, the government said in a statement.

The countries that have not yet ratified the agreement are Vietnam, Malaysia, Brunei, Peru and Chile.

Separate efforts are underway to forge a free trade arrangement within Asia called the Regional Comprehensive Economic Partnership, which encompasses the 10 members of the Association of Southeast Asian Nations, or ASEAN, as well as Japan, South Korea, Australia, New Zealand, India and China, but not the United States.