Pakistan marked its 54th Defense Day on Friday to commemorate the nation's unity and will to defend the country during the war against India in 1965 amid current tensions with its neighbor over Kashmir. 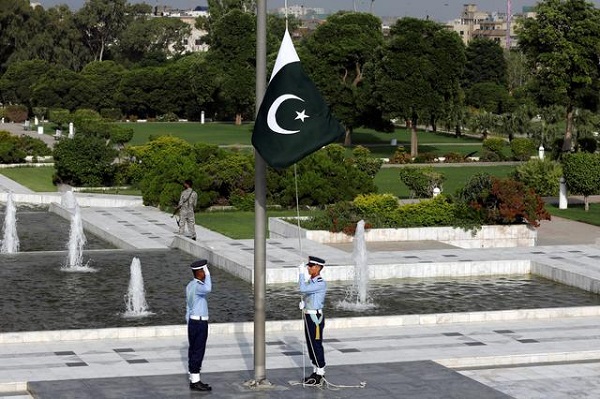 A member of the Pakistan Air Force salutes as the national flag is raised at the mausoleum of Muhammad Ali Jinnah at the Defense Day ceremonies to express solidarity with the people of Kashmir, Pakistan, September 6, 2019. (Photo: CGTN)

President Arif Alvi issued a message saying that inspired by the spirit of 1965, Pakistan had successfully confronted various internal challenges and defeated external conspiracies by imbibing the nation with a passion for self-sufficiency.

Prime Minister Imran Khan said in a separate message that September 6 stands out in the history of Pakistan as a symbol of enduring display of unity, indomitable courage and unmatched sacrifices by gallant soldiers and the valiant armed forces are ever ready to defend every inch of the motherland.

Addressing a ceremony at the General Headquarters in Rawalpindi Friday, Pakistan Army Chief General Qamar Javed Bajwa categorically stated that Pakistan's armed forces would not refrain from any sacrifice for the defense of the motherland in the conventional war and the fight against terrorism.

The war memorial day this time has also been called for solidarity with the Kashmiri people by the government as public offices throughout the country were to be closed at 3:00 p.m. local time to allow employees to attend different ceremonies, according to a notification from the interior ministry.

Tensions have risen between Pakistan and India over the latter's decision last month to revoke the Indian-controlled Kashmir's special status.