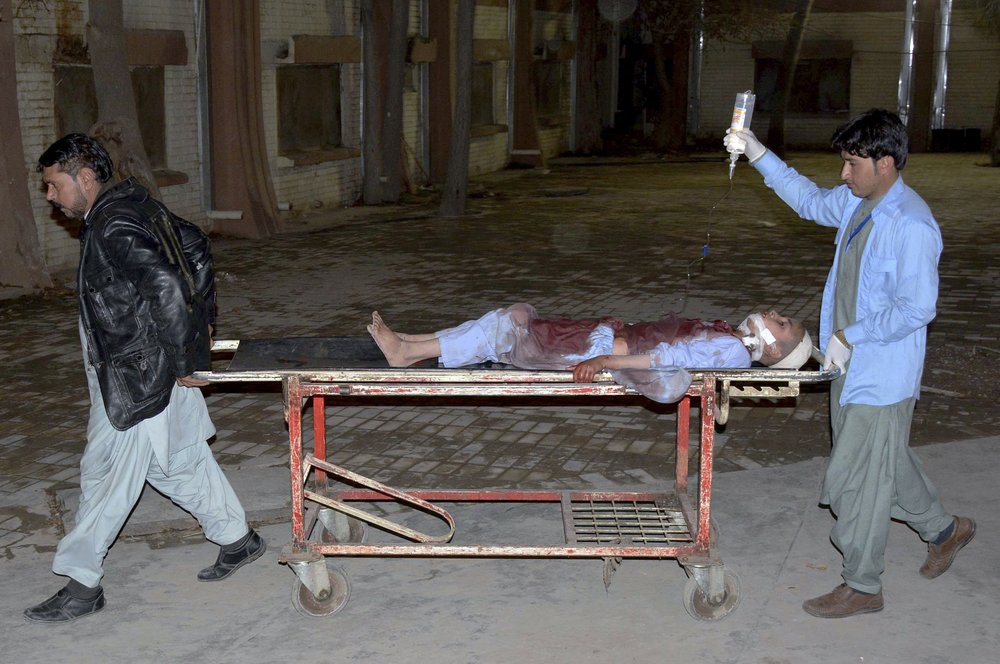 A boy, who was injured in the mosque bombing, is transported at a hospital in Quetta, Pakistan, Friday, Jan. 10, 2020. (Photo: AP)

A powerful explosion ripped through a mosque in southwest Pakistan during Friday evening prayers, killing a senior police officer and at least 13 civilians, police said.

The bombing wounded another 20 worshipers in the city of Quetta, the capital of the restive Baluchistan province, said the city’s police chief Abdur Razzaq Cheema.

Several of the wounded were in critical condition, and hospital authorities feared the death toll could climb further.

The slain police officer was the likely target of the attack, but authorities were still investigating, said a second police official, Mohammad Ajmal.

Prime Minister Imran Khan and Baluchistan’s chief minister, Jam Kamal Khan, condemned the attack. In a statement, Pakistan’s military said soldiers were at the scene of the attack to assist civil authorities.

No one immediately claimed responsibility for the bombing. But the blast struck just days after a roadside bomb in Quetta hit a paramilitary force vehicle, killing two troops.

Hizbul Ahrar, an offshoot of the Pakistani Taliban, claimed responsibility for Tuesday’s attack.

Last May, a bombing at a mosque in Quetta killed two people, including the prayer leader, and wounded 28 worshipers. In August, a powerful bomb exploded inside a mosque on Quetta’s outskirts during Friday prayers.

A number of militant groups operate in Baluchistan province. Some are Sunni militant groups who have in the past targeted the country’s minority Shiite Muslims. There’s also a secessionist group known as the Baluchistan Liberation Army, which has waged a low-level insurgency there for years. The secessionists are demanding more autonomy and a greater share in the region’s natural resources, such as gas and oil.

Pakistan’s government claims it has quelled the insurgency, but violence has continued.

The violent attacks have rarely involved Afghanistan’s Taliban, whose leadership is believed to have a presence in Quetta. Baluchistan shares a long border with Afghanistan and Iran.