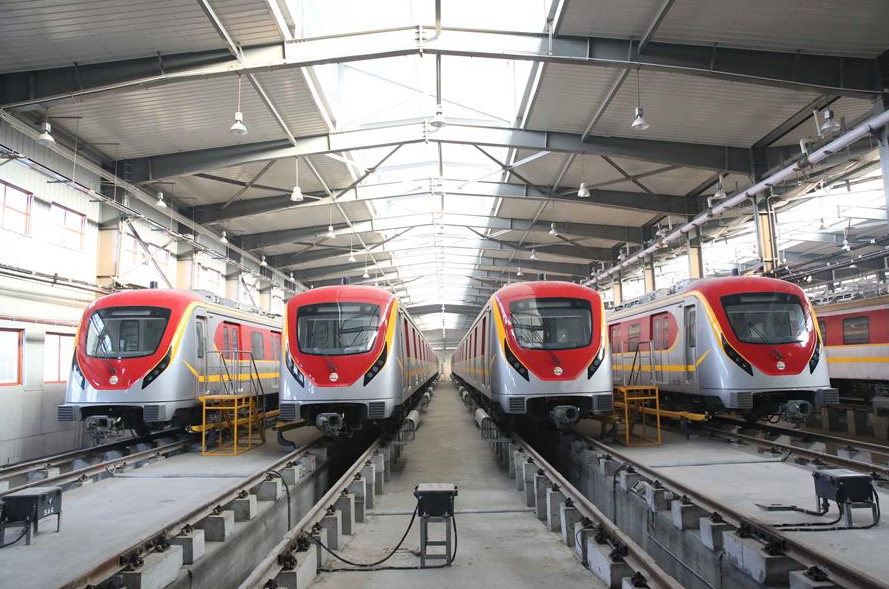 Trains of the metro train service are seen at a terminal station in Lahore, Pakistan, on Dec. 10, 2019. Pakistan's first-ever mass rapid urban transit train took its first test run here on Tuesday after the completion of the physical infrastructure of the project under the China-Pakistan Economic Corridor (CPEC). (Photo: Xinhua/Liu Tian)

Transportation Minister of Punjab Jahanzaib Khan Khichi inaugurated the test run of the Orange Line Metro Train (OLMT), which has been tested partially twice earlier in Lahore, the capital city of the country's eastern Punjab province.

The transport minister told Xinhua that the project is a token of China-Pakistan friendship and a gift to the Pakistani people which provides a high-class transportation service of international standards.

"The project will help the government to counter the rising air pollution by reducing the use of thousands of smoking vehicles," said the minister, adding that a wave of economic activities will also be triggered alongside the route of the service.

The test run was made from Dera Gujran to the Ali Town area at a total of some 25 km route. The train service has 26 stations including 24 elevated stops and two underground stations. The underground track and stations were built to protect historical places which attract hundreds of thousand local and foreign tourists annually, according to General Manager of the Punjab Masstransit Authority Uzair Shah.

The project funded by the Export-Import Bank of China is part of the CPEC and is built by a joint venture of China Railway Corporation and China North Industries Corporation.

During the inaugurating ceremony, Shah said that a total of 27 sets of energy-saving electric trains, each comprising five fully air-conditioned wagons, with the operating speed of 80 km per hour, will provide a comfortable, secure and economical traveling facility to 250,000 passengers daily when it is fully operational in the first half of 2020.

The general manager said that the OLMT is the first of the three rail lines of a Lahore Metro master plan, which is expected to transport half a million people daily by 2025.

Executive Deputy General Manager of the Orange Line Project Wang Yunlin highlighted the importance of the urban rail transit as the most efficient and environment-friendly transportation system in modern big cities, believing that the OLMT will change lifestyle and usher in new development concepts in Lahore.

Wang told the audience that the project adopted advanced Chinese technology, standards, design concepts and equipment at a lower cost than similar projects in other countries.

Information Minister of Punjab province Fayaz-ul-Hasan Chohan hailed the project and vowed that the provincial government would continue to implement the CPEC in a true spirit as it is not a project of Pakistan's any political party or government but project of the Pakistani people.

A local journalist named Tahir Kalasra, who was one of the dozens of media persons reporting the test run, told Xinhua that the project is need of the time in the city which is facing a high rise in traffic congestions.

Waqar Ahmad, a taxi driver in Lahore, said the project would be a blessing for the common people, especially the commuters, by providing them cheap, quick and comfortable traveling as it passes through the middle of the city touching all important areas by cutting the traveling time by more than 70 percent.