After receiving a three-month training, he has become a skilled operator at the water-processing factory of the project which is aiming to provide around 10 percent of the current total energy gap in Pakistan.

Apart from pretty learning a new skill and getting paid well, Adeel said he’s pretty happy that he’s in a safe working environment.

Under construction about 65 kilometers away from Islamabad, Karot Hydropower Plant is the first project of the Silk Road Fund initiated by Chinese President Xi Jinping. It has long been seen as a flagship project of the China-Pakistan Economic Corridor (CPEC).

The Pakistani government has dispatched around 18,000 soldiers along the CPEC to protect the safety of all important projects, including the daily commuting military service between Islamabad and the construction site. 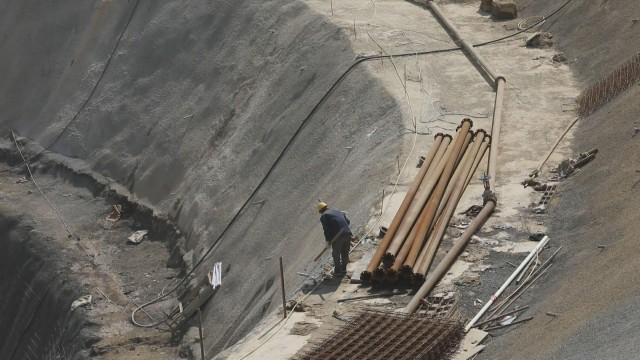 And all the patrolling armed security guards, policemen and soldiers can be seen at the campus, telling how important this power plant is for Pakistan. And there's a barrack stationed nearby with hundreds of soldiers.

"The construction started on December 1, 2016. Now the work is going very smoothly and 12 percent of the whole project has been finished. It’s estimated that the first power unit will be connected to the grid by April 2021. But we’re trying to make it ahead of schedule,” said Li Zhili, a project manager.

Pakistan has long been suffering from power outages. Even in Islamabad, the capital of Pakistan, power outages is quite common. During summertime, the duration of blackouts can last up to 12 hours a day.
Li said this 720-megawatt hydropower plant can produce 3.2 billion kilowatts of electricity per hour every year. That’ll save Pakistan from burning 1.5 million tons of coal.

China’s Three Gorges Group is responsible for designing and building this plant. But in fact, most of the workers are locals.

“Now at this site, we have over 1,800 Pakistani workers and around 460 Chinese workers. And the local workers will continue to increase to around 2,300. And we set up a mechanism to let skilled Chinese workers train the new Pakistani workers, ” said He Wenzhan, Chief Engineer of the Yangtze Three Gorges Technology & Economy Development.

Apart from Karot, the Three Gorges Group is also building the biggest wind power base in southern Pakistan which will benefit half a million people. From nuclear to solar and thermal, power plants along the CPEC will account for 40 percent of the total new generating capacity in the next decade.

Adeel Shahzad said he hopes there will be more infrastructure constructions like this one because they can’t wait to say goodbye to the electricity shortage in Pakistan.