WORLD Pakistan seeks extradition of IS leader from Afghanistan

Pakistan seeks extradition of IS leader from Afghanistan 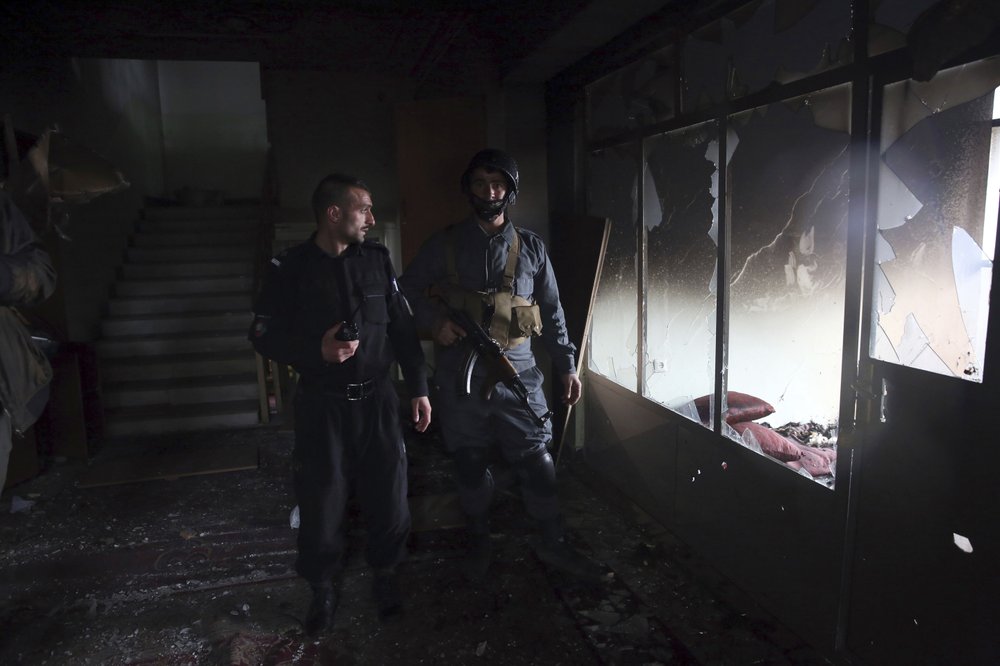 in this Wednesday, March 25, 2020, photo, security personnel inspect a Sikh house of worship in the aftermath of a deadly attack in Kabul, Afghanistan. Pakistan asked neighbor Afghanistan to extradite Aslam Farooqi, a leader of the local Islamic State affiliate, who was arrested in an Afghan intelligence operation in southern Afghanistan earlier this month. (Photo: AP)

Pakistan has asked neighboring Afghanistan to extradite a leader in the local Islamic State affiliate who was arrested in an Afghan intelligence operation in southern Afghanistan earlier this month, the foreign ministry said.

Aslam Farooqi is a Pakistani national wanted in connection with attacks claimed by IS in Pakistan. The Afghan government accuses him of involvement in last month’s attack on a Sikh house of worship in the Afghan capital, Kabul, that killed 25 worshipers.

The Islamic State group, on the website of its Aamaq news agency, claimed responsibility for the attack, saying it was carried out by Indian national Abu Khalid Al-Hindi in revenge for Indian military actions in the violence-wracked India-administered section of the disputed Himalayan region of Kashmir.

A single gunman rampaged through the Gurdwara, a Sikh place of worship, exploding grenades and firing at worshipers. There were about 150 people inside at the time, before Afghan special forces killed the attacker.

The request from Islamabad came late Thursday. Pakistan’s Foreign Ministry said the Afghan Ambassador to Pakistan, Atif Mashal, had been summoned and told of Pakistan’s worries about the activities of the Islamic State affiliate, headquartered in eastern Afghanistan.

“Since Aslam Farooqi was involved in anti-Pakistan activities in Afghanistan, he should be handed-over to Pakistan for further investigations,” the ministry said.

Farooqi, whose real name is Abdullah Orakzai, was arrested last weekend along with 19 other IS operatives, according to Afghanistan’s intelligence agency.

On Friday, Kabul said it would not hand him over as it has no extradition treaty with Pakistan. Instead, “Aslam Farooqi will be dealt with based on the Afghanistan’s law,” the Afghan government said.

The regional affiliate of the Islamic State group has taken credit for attacks in Pakistan, including one in January in Quetta, the capital of southwestern Baluchistan province, that killed 15 worshipers.

In recent months, Afghan and American officials say the IS has been weakened as a result of relentless U.S. bombing raids in eastern Afghanistan, as well as military operations by the Afghan security forces and attacks by IS rivals, Taliban insurgents.

In the months leading up to Washington’s peace deal with the Taliban signed in late February, U.S. officials said a key component of the agreement was a promise by the Taliban to aid in the fight against IS, seen as the greatest threat to U.S. national security emanating from Afghanistan.

Still, the U.S.-Taliban peace deal has had a rocky start. Political wrangling in Kabul between President Ashraf Ghani and his rival in last year’s disputed presidential polls, Abdullah Abdullah, has frustrated Washington, which has threatened to withdraw $1 billion in aid if the two don’t find a power-sharing deal. Their bickering has delayed the next critical step in the deal, which calls for intra-Afghan negotiations between Kabul leaders, many of whom are linked to warlords, and the Taliban.

Also, delays in completing a prisoner release as laid out in the U.S.-Taliban deal have further frustrated peace efforts. Still, the U.S. and NATO began withdrawing forces from Afghanistan. If the Taliban keep their promise to fight other militant groups, the U.S. is expected to withdraw all its forces over a 14-month period from the signing of the deal.