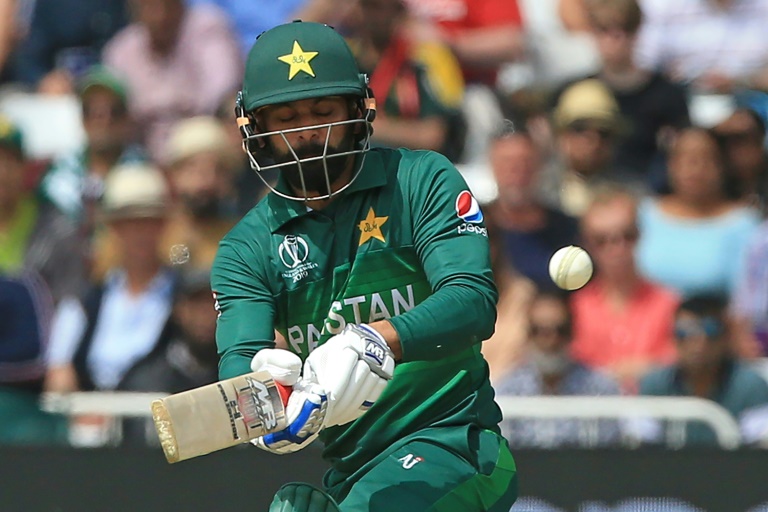 Mohammad Hafeez missed out on becoming the first century-maker of the World Cup but a vastly improved Pakistan batting display left England facing a record chase at Trent Bridge on Monday.

Hafeez made 84 in a total of 348 for eight after being dropped on 14 when Jason Roy floored a routine chance at mid-off following a skied drive off Adil Rashid.

With Babar Azam (63) and Pakistan captain Sarfaraz Ahmed (55) also making fifties, this was a major turnaround from a Pakistan side who collapsed to 105 all out in a seven-wicket defeat by the West Indies in their World Cup opener at the same ground on Friday.

The highest total made by any team batting second to win a World Cup match is Ireland's 329 for seven against England in Bangalore in 2011.

Pakistan, however, failed to defend a score of 340 against England -- the world's top-ranked ODI side -- at Trent Bridge last month.

"I think self-belief is the key," said Hafeez during the break between innings. "We all know we can handle any situation but we played a couple of bad shots against (the West Indies).

"The pitch is holding up a bit and the spinners are getting turn and stoppage and there is a little for the seamers as well, so I think 348 is a good score," he added.

Pakistan were undone by a barrage of bouncers against the West Indies and England, unsurprisingly, deployed similar tactics after captain Eoin Morgan won the toss, with their attack featuring recalled fast bowler Mark Wood.

But Pakistan coped well on a ground where England have twice set a world record for the highest one-day international total -- 444 for three against Pakistan in 2016 and last year's 481 for six against Australia.

For all the talk about England's quicks, it was off-spinner Moeen Ali who took the first three wickets Monday on his way to figures of three for 50.

By contrast, fast bowler Jofra Archer's 10 wicketless overs cost 79 runs while Woakes, who equalled the record of four catches by an outfielder in a World Cup innings, took an expensive three for 71 in eight overs.

Tournament favourites England were surprisingly sloppy with their ground fielding.

Pakistan, who have lost their past 11 completed one-day internationals, including a 4-0 series defeat to England, went on the attack from the start, with Fakhar Zaman and Imam-ul-Haq giving their side early momentum.

But a stand of 82 ended when Fakhar was stumped by Jos Buttler off Moeen for 36.

Imam holed out for 44 when he lofted Moeen only for Woakes, running round from long-off, to hold an excellent diving catch.

The normally mild-mannered Woakes turned to the crowd and cupped his ears in what appeared to be a response to barracking from spectators.

Babar completed a run-a-ball fifty before he too fell to the Moeen-Woakes combination while Hafeez, cashing in on his reprieve, hit a six and four off successive balls from leg-spinner Rashid on his way to a 39-ball fifty.

Hafeez lofted a loose legside delivery from Wood for six to go into the 80s, only to fall when he drove a catch to Woakes at long-off.

But Sarfaraz maintained the momentum with a 40-ball fifty.