KABUL, Nov. 19 (Xinhua) -- The visiting Pakistani Prime Minister Imran Khan said here on Thursday that Pakistan supports an inclusive peace process in Afghanistan and will make all its efforts for peace in Afghanistan. 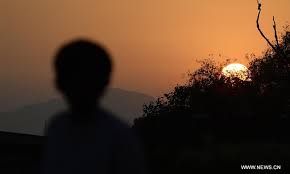 "The whole idea of coming at the time while violence is increasing in Afghanistan is to assure you Mr. president, that we the people of Pakistan and the government of Pakistan have only one concern and that is what you are feeling in Afghanistan, that we want peace (in Afghanistan)," Khan told reporters at a joint press conference with Afghan President Mohammad Ashraf Ghani.

Khan arrived in Kabul earlier on Thursday on a one-day visit at the invitation of Ghani.

Earlier in the day, Ghani and Khan discussed the Afghan peace process and bilateral ties during a meeting in Arg, the country's presidential palace.

Khan said that Pakistan was concerned about the recent resurgence of violence in Afghanistan despite ongoing peace negotiations between Afghan government delegation and Taliban representatives in Doha, capital of the Gulf state Qatar.

"We notice with concern that the level of violence (in Afghanistan) despite the talks in Qatar is rising, so my idea for choosing this time to come was to assure you that Pakistan will do everything whatever is possible, we will do to help reduce this violence," Khan said.

Khan noted that the aim of his trip was to build trust and strengthen relations between Afghanistan and Pakistan.

President Ghani called Khan's visit to Kabul as a "historic trip" saying Pakistani prime minister's trip had a message that violence is not an answer to the current situation in Afghanistan.

"The appeal of the people of Afghanistan was a comprehensive ceasefire as soon as that would be feasible," Ghani said at the same press conference.

This is Khan's first visit to Afghanistan since assuming office in 2018, according to him.