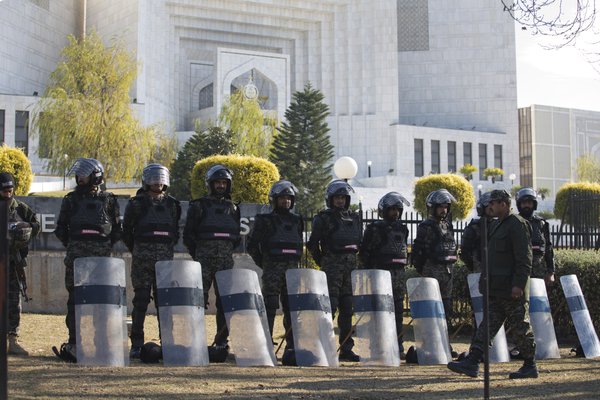 Pakistan’s top court on Tuesday upheld its acquittal of a Christian woman who spent eight years on death row after being convicted of blasphemy, dealing a blow to radical Islamists who had staged violent mass protests last year calling for her execution.

Aasia Bibi watched from a secret location as the decision was announced on television, according to a friend who was on the phone with her at the time. He said Bibi’s first thought upon hearing the news was that she would soon be able to join her daughters in Canada, where they have been granted asylum.

The friend spoke on condition of anonymity out of fear for his safety. Bibi, her lawyer and the Supreme Court judges who eventually freed her have all received death threats from radical Islamists, and a small army of police and paramilitary Rangers was on hand to guard the courthouse and surrounding area on Tuesday.

Blasphemy is punishable by death in Pakistan, and the mere accusation can spark mob violence and lynchings. A provincial governor who defended Bibi was shot and killed, as was a government minority minister who questioned the blasphemy law.

Thousands of Islamists took to the streets and clashed with police after Bibi’s initial acquittal on Oct. 31, but there were no such protests this time, perhaps because of the heightened security presence and a nationwide police sweep that arrested hundreds of supporters of radical religious parties from their homes on Monday.

Since her acquittal, Bibi has lived in hiding at an undisclosed location protected by Pakistani security forces who have kept her confined to her quarters, unable to even open a window. She speaks daily to her daughters in Canada, and worries about her 19-year-old, who has learning challenges, the friend said.

“I am really grateful to everybody. Now after nine years it is confirmed that I am free and I will be going to hug my daughters,” he quoted Bibi as saying after the ruling was announced.

Bibi’s lawyer, Saiful Malook, who returned to Islamabad for the hearing after fleeing the country amid death threats, called the decision a victory for Pakistan’s constitution and rule of law.

“This case is a milestone for Pakistan, given that the law is often unkind to religious minorities,” said Michael Kugelman, deputy director of the Asia Program at the Washington-based Wilson Center. He cautioned that Pakistan’s courts are still susceptible to political pressure, but said the Supreme Court’s actions represented a “legal watershed.”

The court did not question the blasphemy law itself, which critics say is often used to settle scores or intimidate followers of minority religions, including Shiite Muslims.

Bibi’s ordeal began on a hot day in 2009 when she brought water to fellow farmhands who refused to drink from the same container as a Christian woman. Two of her fellow farmworkers argued with Bibi and later accused her of insulting Islam’s Prophet Muhammad. Bibi, who has always denied the allegations, was sentenced to death the following year.

Pakistan’s Chief Justice Asif Saeed Khan Khosa, who led the panel that upheld Bibi’s acquittal, said in court that Bibi’s accusers were guilty of perjury and that if the case had not been so sensitive, they should have been jailed for life.

“The image of Islam we are showing to the world gives me much grief and sorrow,” Khosa said.

Much of the evidence presented against Bibi was suspicious, and some of it appeared to be fabricated, he said, adding that the cleric who lodged the initial charge of blasphemy gave contradictory statements that were unchallenged in the trial. Ghulam Mustafa Chaudhry, the lawyer representing the cleric who petitioned for a review of the sentence, denied that any witnesses had given false testimony.

Following Bibi’s initial acquittal, radical religious parties took to the streets in mass protests, calling for the killing of the judges behind the ruling and for the overthrow of Prime Minister Imran Khan’s government. They also filed the last-minute appeal for a review of the acquittal. The protests were spearheaded by the radical Tehreek-e-Labbaik party, whose single point agenda is protection of Islam and the Prophet Muhammad.

After days of protests, authorities arrested radical clerics Khadim Hussain Rizvi and Mohammad Afzal Qadri, both leaders of the party, and several of their followers for destroying public property during rallies against Bibi and for inciting their followers to violence. The clerics and the others remain in custody.

The group called for protests again, but Pakistani media say police arrested hundreds of party activists in Lahore, Islamabad and nearby Rawalpindi on Monday in an apparent attempt to prevent a repeat of last year’s unrest.

After the court ruling, Mohammad Shafiq Amini, the acting chief of Tehreek-e-Labbaik, issued a video message rejecting Tuesday’s decision as “cruel and unjust.”

He said Muslims should feel ashamed that Bibi was not executed and asked the Prophet Muhammad for “forgiveness that we could not do anything, and that blasphemers are alive.” He again asked the party’s supporters to fill the jails across Pakistan by getting arrested for protesting, but by late Tuesday there were no signs of mass protests.

Joseph Francis, a Christian activist who attended Tuesday’s hearing, said the decision was good news for Pakistan’s minority Christian community. “I am happy because the judges spoke out strongly against giving false evidence,” he said.

Human rights activist Tahira Abdullah said religion and politics have become a “horrible jumble” in Pakistan. Tuesday’s decision could have a “deterrent effect,” she said, “but knowing the political mileage to be gained from false charges of blasphemy, I doubt it.”